Sunrise, 2nd Floor, Star Ballroom 5 (Moon Palace Resort)
M. A. Folgado, P. Ferreira-Aparicio, and A. M. Chaparro (CIEMAT)
Dimensional changes of Nafion polymer membranes occur by absorption of water giving rise to expansion in the three dimensions. For a standard Nafion membrane (NRE212, EW=1100), a change from a base dry state (5% water content) to a fully humidified state (50% water content) produces around 10% in-plane expansion at room temperature, whereas the thickness change may be up to 70% according to our measurements. Based on such Nafion expansion capability, the mounting of fuel cells can be carried out following two different strategies. One is performing first a humidification step and, then, mounting the membrane with the expanded dimensions. This strategy is mostly followed, but it may be problematic because handling humidified membranes difficults attaining fast and reproducible results, and in some cases it is incompatible with other processing steps. A second possibility is mounting dry membranes directly into the cell. Dry membranes are easily handled, and may be incorporated in a chain process without difficulty, like for deposition of catalyst layers or fuel cell mounting. On the other hand, mounting cells with dry membranes gives rise to their expansion inside the cell, under the constraint of the gas diffusion layer and the flow field plates. Such expansion yields necessarily different results than the unconstrained, free, expansion of Nafion.

In this communication a study is presented about the influence of Nafion expansion on the response of a proton exchange membrane fuel cell (PEMFC). First, the constrained expansion of the membrane is analyzed within the flow field of a cell, and compared with its free expansion. The study has been carried out by means of a specially designed cell that allows for the observation of morphology changes in cross section with optical microscopy. Minimal changes are observed in the morphology of the free expanded MEAs when clamping pressure and/or humidification is applied within the cell hardware (Fig. 1b). MEAs expanded within the cell hardware (Fig. 1a), however, lead to a zig-zag morphology.

In a second part, free and constrained expanded Nafion have been tested in single cells. The responses of both types of expansion have been analyzed by polarization curves (Fig. 1c), active area measurements, and impedance spectroscopy. First results indicate better behavior of free expanded Nafion, due to lower internal resistance of the cell. Durability issues under expansion-contraction cycles, and cell voltage cycles will also be analyzed.

This work is financed by the project ELECTROFILM, MAT2011-27151 from Ministry of Science and Innovation of Spain. 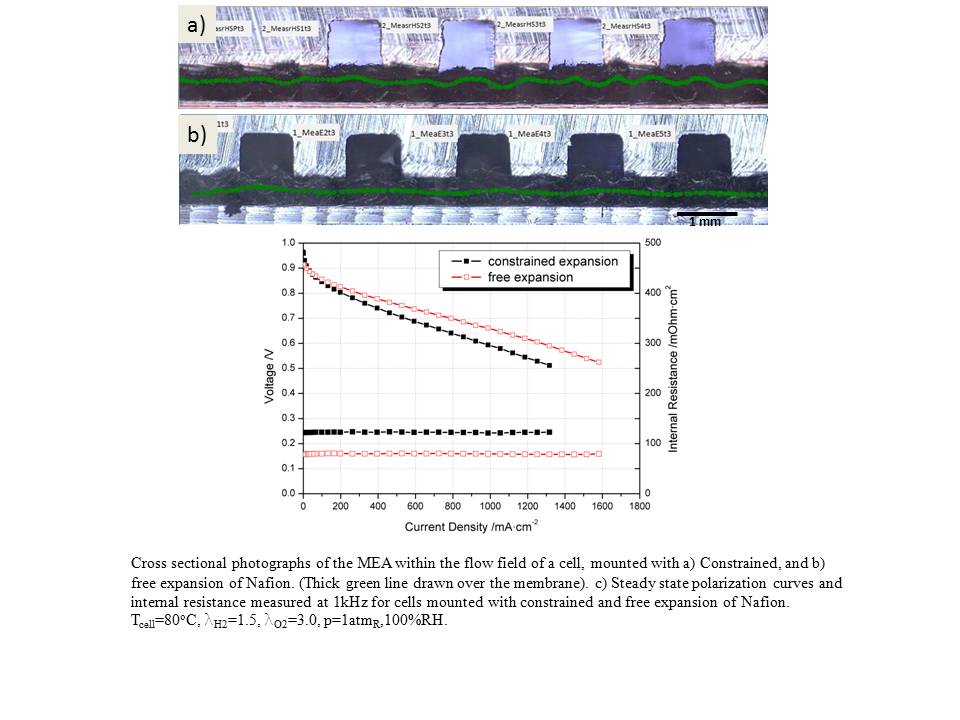