Sunrise, 2nd Floor, Star Ballroom 5 (Moon Palace Resort)
M. Burkholder (Carnegie Mellon University) and S. Litster (Mechanical Engineering, Carnegie Mellon University)
During polymer electrolyte fuel cell (PEFC) operation, proper water management is necessary to optimize performance [1]. It is desirable to have enough water to fully hydrate the electrolyte membrane with no excess liquid water to interfere with the transport of oxygen to the cathode, causing power loss. However, the air flow rate and pressure drop used to remove liquid water from the cathode and maintain power can cause large parasitic power losses. Low cathode pressure drops that are parasitically inexpensive to maintain lead to voltage instability and loss [2], while high flow rates and pressure drops stabilize voltage at the cost of a higher parasitic load on the PEFC and lower system efficiency.

In this work, we perform experiments on a simulated fuel cell stack that consists of a constant hydraulic resistance bypass around the cathode, allowing air flow to the cathode to divert through the parallel bypass as the cathode's hydraulic resistance changes in the presence of liquid water. This bypass can be used to simulate a stack of unflooded cells in parallel with the experimental cell [2]. Downstream of the simulated stack we placed a solenoid valve followed by a pressure regulator to apply controlled pressure perturbations to the simulated stack. The perturbations consist of a short (< 1 second) reduction in backpressure followed by backpressure recovery. The PEFC cathode was also equipped with a differential pressure transducer to measure the pressure drop across the flow field. We formulated reduced order nonlinear statistics based on chaotic invariants (the Lyapunov exponent of the voltage return map, λ) to quantify the level of instability in the PEFC and implemented a computer program to monitor the PEFC stability in real time.

Using the simulated stack under galvanotstatic operation, we recorded the PEFC voltage, cathode differential pressure (ΔPc), and λ responses to varying magnitudes of pressure perturbations during operation in an unstable regime (low current density, low air flow rate). We found that the pressure perturbations stabilized the voltage, Fig. 1, while allowing for a reduced pressure drop. We then implemented a control scheme that monitors the Lyapunov exponent for values above a threshold and applies a corrective pressure perturbation when this occurs. As Fig. 2 shows, this control scheme recovered lost power, stabilized voltage, and reduced cathode pressure drop with minimal energetic expense. 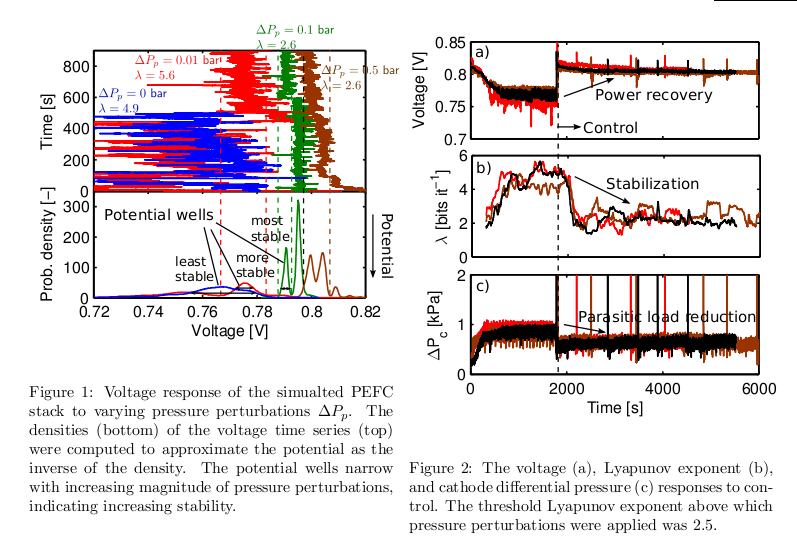