Optimization of the water condition in the PEMFC is a critical factor to increase power generation efficiency, however, water transport behavior in the cell is complicated and difficult to be studied by experimental methods because of the thinness of components of the PEMFC. Combined use of experiments and numerical analysis is better way to understand phenomena in the cell, and the latter is mainly used in this report.

Three-dimensional analytical model considering distributions of temperature and liquid water in GDL and gas channel is developed to estimate unsteady performance of the PEMFC. For estimating gas diffusivity in GDL with liquid water, not only the percentage of water saturation, the effects of droplet size is newly considered in the present model. Effective thermal conductivity and evaporation kinetic coefficient are also considered to have dependence on the abundance of droplet size. Finally, the proposed model was validated by comparing steady and unsteady calculation results with the experimental ones.

The measured time response of normalized membrane resistances after current density change from 0.5[A/cm2] to 0.01[A/cm2] was plotted in Fig. 2 by dots. The response was not simple and it had at least three flection points. The calculated results with and without consideration of the droplet size effects were also shown in Fig. 3. A calculated response without consideration, dotted line, is a simpler curve with only two flection points and did not accord with the measured response. On the other hands, the solid line considering droplet size was close to the measured plots with also at least three similar flection points. This complicated curve could not calculated by the simple model without consideration of multiple droplet size. The calculated liquid water saturation distribution is shown in Fig. 3, and the difference of water saturation under rib and channel could be a reason for the complicated response. 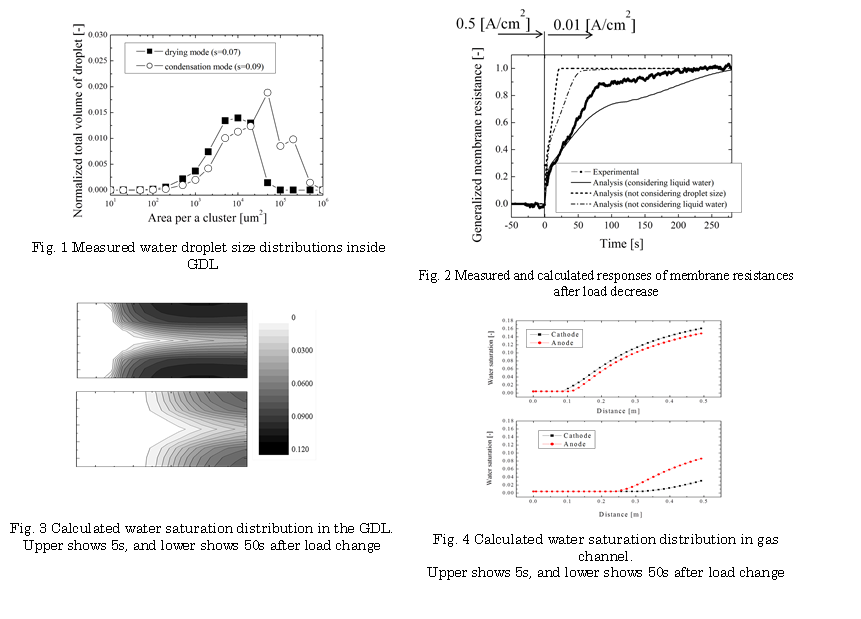