Expo Center, 1st Floor, Center and Right Foyers (Moon Palace Resort)
R. V. Kamalov, V. A. Volkovich, A. B. Ivanov, B. D. Vasin (Ural Federal University), and T. R. Griffiths (Trevor Redston Consulting Ltd)
Molybdenum in chloride melts can form chloro-species containing the metal in the oxidation states +3, +4 and +5.  In the highest oxidation state, +6, molybdenum can form oxygen-containing ions.  Amongst the molybdenum chloro-species those of the higher oxidation states (+5 and +4) are the least studied.  In the present work the behavior of Mo(V) chloride was studied in a range of alkali chloride melts employing electronic absorption spectroscopy.  The experiments were performed in LiCl-KCl, NaCl-CsCl, NaCl-KCl-CsCl eutectics and NaCl-KCl equimolar mixture between 450 and 750 oC, depending on the melt composition.  Molybdenum(V) ions were introduced into the melt by feeding MoCl5vapor using the procedure described earlier (1).  Analysis of the melt samples taken after the experiments showed that the mean oxidation state of molybdenum in the salt phase was +5.

Electronic absorption spectra recorded upon dissolution of MoCl5 in an alkali chloride melt contained a broad band with a maximum around 13000 cm-1 (770 nm).  Resolution of the spectra into individual bands, however, showed that this band represents a superposition of two bands with maxima around 15500 and 12500 cm-1, Fig. 1.

The ratio between the intensities of these two component bands depends on temperature.  At low temperatures the spectrum contains essentially one band (marked as 1 in Fig. 1) around 767 nm (13100 cm-1) corresponding to 2T2g→2Eg transition in the octahedral MoCl6- ion.  The energy of this transition agrees with that observed for WCl6- ion, isoelectronic with MoCl6- (2).  On increasing temperature the second band (marked as 2 in Fig. 1) around 650 nm (15500 cm-1) becomes more prominent.  The ratio of intensities of bands 1 and 2 changes with temperature, e.g. in LiCl-KCl melt it decreases from 1 : 0.2 at 450 oC to 1 : 2.6 at 850 oC.

The band around 650 nm corresponds to the absorption of molecular MoCl5 (3).  In the present study the absorption spectra of gaseous MoCl5 were measured at various temperatures and an example is shown in Fig. 2.  Resolution of the spectrum of gaseous MoCl5 into individual bands, Fig. 3, shows that in the visible region there are two bands, a very intense one above 17000 cm-1 and a medium intensity band around 15000 cm-1.  These bands can account for the changes in the spectra of Mo(V) solutions in the chloride melts occurring upon increasing temperature.

Analysis of the spectroscopic data therefore shows that there are two species present in alkali chloride melts containing the products of MoCl5 dissolution, MoCl6- and MoCl5.  Most likely that these species are present in the equilibrium:

and this equilibrium is shifted to the right with temperature. 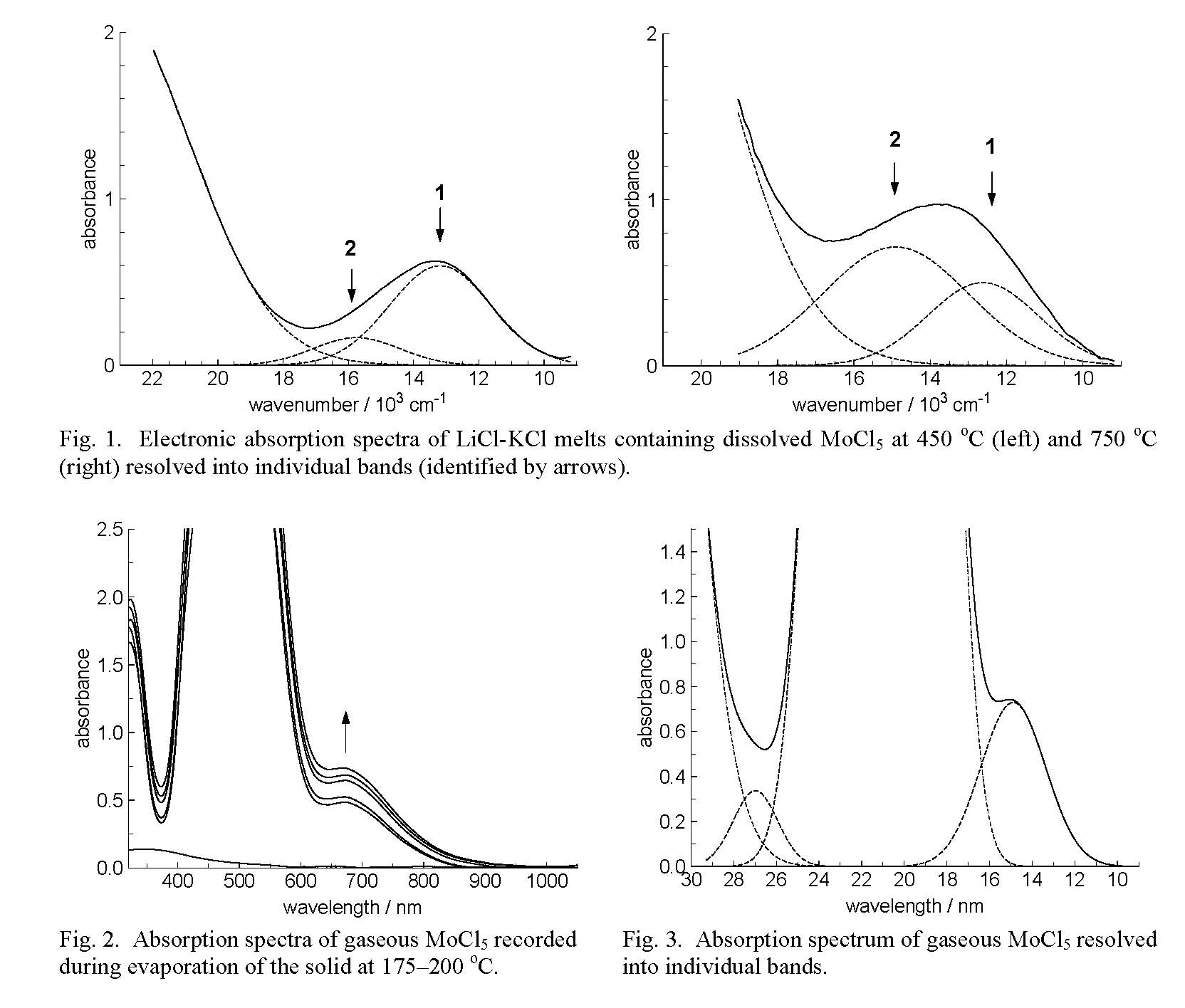