Expo Center, 1st Floor, Center and Right Foyers (Moon Palace Resort)
S. Y. Melchakov, D. S. Maltsev, V. A. Volkovich, L. F. Yamshchikov (Ural Federal University), and A. G. Osipenko (Research Institute of Atomic Reactors)
Molten salts and metals can be used as working media in pyrochemical reprocessing of spent nuclear fuels (SNF), particularly for separating lanthanides (fission products) and actinides (fission materials).  Radiation stability of metals and inorganic salts and absence of neutron moderators allow reprocessing a high burn-up SNF of fast neutron reactors after a relatively short cooling time.  Metals of the IIIA group of the periodic table and their alloys are the promising systems for separating SNF components. Low melting points of some of these metals (29.77 °C for Ga, 156.78 °C for In and 15.3 °C for the Ga-In eutectic) allow working in a wide temperature range.

The efficiency of separation of SNF’s components in a ‘molten salt – liquid metal’ system can be estimated from the values of separation factor Θ:

where c1, c2, x1, and x2are the mole fraction concentrations of the separated metals in the fused salt and liquid metal alloy phases, respectively.

In the present work the separation factors, Θ, of Ln/U couples were determined from the results of activity coefficients measurements.  In chloride melts uranium and lanthanides form ions containing the metals in the oxidation state +3.  Therefore the following equation was employed to calculate Θ:

where E* denotes the formal standard electrode potentials of the metals in the salt phase and γ activity coefficients of the same metals in the liquid alloy phase, and the number of exchanged electrons, n, equals to 3.  The salt phase was based on the ternary low melting LiCl-KCl-CsCl eutectic (m.p. 263 oC) and the formal electrode potentials of uranium, neodymium and praseodymium in this melt were determined experimentally.

Temperature dependencies of activity coefficients of f-elements were calculated using the experimental data on activity (a) and solubility (X) of Pr, Nd and U in liquid Ga, In and Ga-In eutectic alloy.  The relation between a, γ and X is expressed by the following equation:

The obtained data show that separation of lanthanides and actinides using gallium-indium alloys is possible.  The highest separation factors of all studied here Ln/U couples are reached in gallium-containing liquid metal phases and by their magnitude they are virtually identical for Ga and Ga-In alloys.  The reason for such behaviour is that at least one of the f-elements (uranium or lanthanide) predominantly interacts with gallium, whilst indium in the eutectic alloy acts as an indifferent additive.  As the temperature decreases the efficiency of Ln/An separation is increasing, as expected.

From the obtained results it can be concluded that under the equilibrium conditions in the studied ‘liquid metal – molten salt’ system lanthanides should concentrate in the salt phase and actinides (in our case U) should concentrate in the liquid metal.  A separate series of experiments run on determination of separation of uranium and lanthanides using Ga-In alloys and LiCl-KCl-CsCl eutectic based melts confirmed this distribution of the elements between the phases. 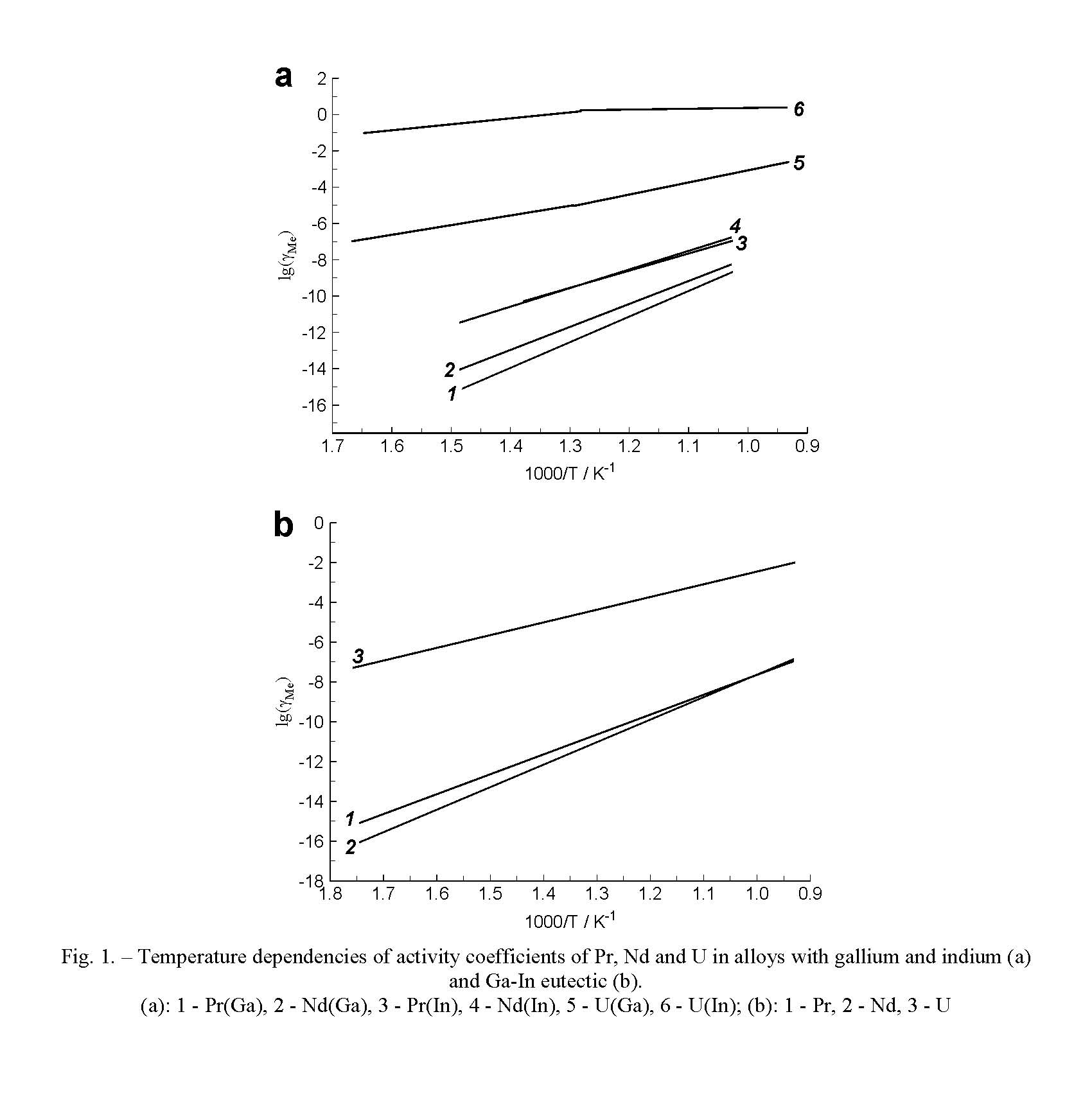