Fuel cells are expected to be a next-generation electrical energy device with a large energy density and do no harm to the environment. Among all type of fuel cells, polymer electrolyte fuel cell (PEFC), which is expected to be automotive power-supply system, have attracted much more attention. However, the solid polymer electrolyte for PEFCs is usually acid, which demand for noble metals (Pt, Ru, etc.) as electrode catalysts. Therefore, we focus on a newly noticed fuel cell named anion-exchange membrane fuel cells (AEMFCs), which use polymer electrolyte that transports hydroxide ions. By employing non-platinum catalysts such as transition metal oxides, AEMFCs reduced the cost comparing to PEFCs. However, polymer electrolyte in AEMFCs is not able to tolerate high temperatures or carbon dioxide, which mainly causes degradation of the polymer electrolyte membranes. For these reasons, we have focused on layered double hydroxide (LDH), which is known as a candidate of anion conductor with high tolerance to high temperatures and carbonation [1]. Here we report the fabrication of various LDHs and show the relationship between LDH with various cation ratios and the anion conductivity.

Figure 1 shows XRD patterns of prepared NiAl-LDHs, which shows good agreement with published data [4]. As the ratios of Al / (Ni+Al) in NiAl-LDHs increased, diffraction peaks appeared more positively. The nyquist plot of impedance spectroscopy indicates that the existance of temperature dependancy resistance. Figure 2 shows ion conductivities of NiAl-LDHs as a function of the Al / (Ni+Al) in NiAl-LDH, determined with ICP. According to figure 2, we can conclude that there is no linear relationship between x and ion conductivity and the maximum ion conductivity appears at x= 0.25. However, either by the coprecipitation method or by the urea method, we have not observed the diffraction peak shifts of LiAl-LDHs, which indicates that the ratios of Al / (Li+Al) in LiAl-LDHs cannot be controlled. Further discussion will be made in the conference. 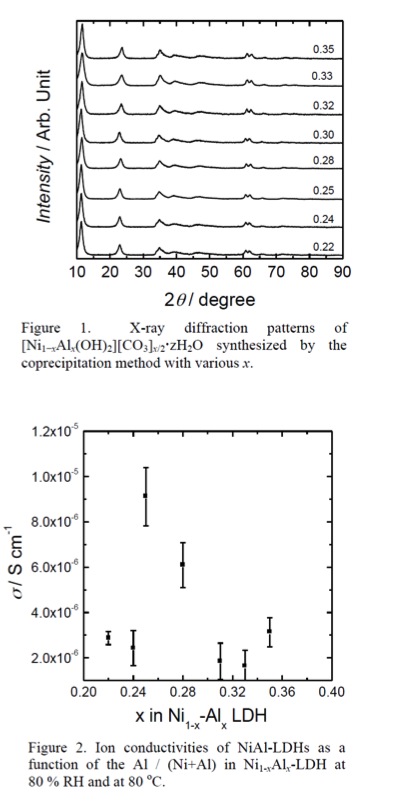