There has been increasing interest in metal-air secondary batteries such as  Zn-air secondary batteries,  Al-air secondary batteries, etc. These batteries are expected to have high energy densities because they can utilize ambient air as their positive electrode material. They are also expected to be very safe because they can utilize aqueous electrolyte solutions. Therefore, they are very attractive power sources for electric vehicles. However, there are many problems at negative and positive electrodes, and in alkaline electrolyte solution for practical use. Among them, the low power density of air electrode is one of the most serious problems as power sources for electric vehicles.

Figure 2 shows the segmental currents of Pt interdigitated array electrode in 1.0 mol dm-3 KOH (saturated with mix gas of O2 and Ar  (Po2= 0.2 atm) ). Relatively low segmental currents were observed  from 0.0 mm to 2.9 mm. This is because intrinsic meniscus was formed at these regions. It is assumed that electrolyte thin film was formed at upper regions exceeding 3.0 mm. In these regions, current crowding at the low segments was observed. The higher the applied potential was and the lower the electrolyte conductivity was, the greater the current crowding became. This suggests that ohmic-loss should be caused at electrolyte thin film. Limiting current was also observed at low segments of electrolyte thin film. With the increase of the oxygen partial pressure, the limiting currents were increased. This indicates that oxygen diffusion should be a rate-determining step at the regions where local overpotentials were sufficiently high. 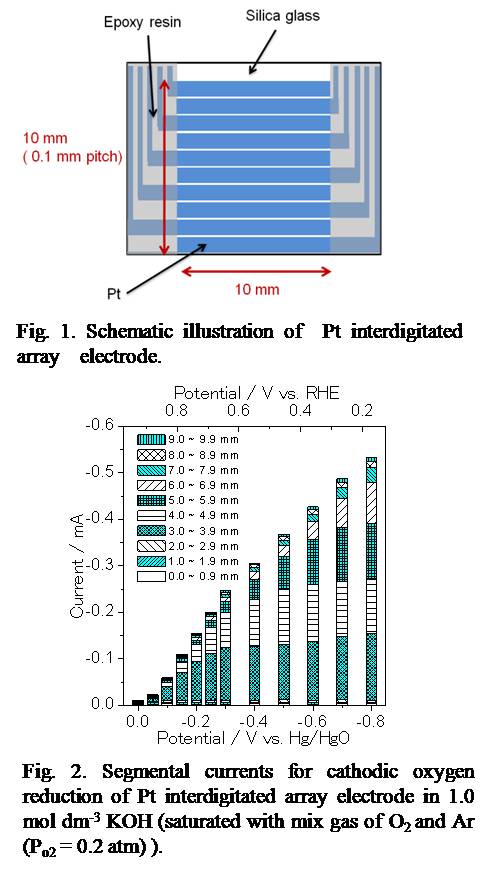