It is recognized that Pt/C catalyst is degraded by electrochemical Ostwald ripening and migration of Pt particles at the cathode [1].  And also, carbon corrosion is serious under increasing the cathode potential.  Considering the degradation mechanisms, we reported that surface modification of carbon support with high durable material as tin dioxide is promising technique [2].

In this study, correlation between preparation condition and performance of Pt/SnO2/KB is investigated.

For preparation of Pt/SnO2/KB, Ketjen black modified with tin oxide particles (SnO2/KB) is firstly prepared and then Pt was loaded on SnO2/KB.

Pt/SnO2/KB, Nafion® solution (Aldrich) and i-propanol was mixed ultrasonically to prepare the catalyst ink.  The ink was dropped on a glassy carbon disk and was used for the working electrode to measure the catalytic activity for ORR and the durability. An electrochemical cell filled with 0.1 mol dm-3 HClO4 aqueous solution was used. ORR activity was measured under O2atmosphere by a rotating disk electrode technique.

The potential pulse durability tests were conducted between 1.0 V and 0.6 V to evaluate Pt durability.  Electrochemical active surface area (ECA) of Pt catalysts was estimated after an arbitrary period by cyclic voltammetry (CV) during the durability test.

Table 1 shows specific and mass activity for ORR of Pt/SnO2/KB heated at 120oC and 300oC.  ORR activity of both catalysts is approximately same.  We reported that ORR activity is increased by SnO2/KB when SnO2 weight ratio is over 35wt% [3].  Unfortunately, ORR activity is almost same for the catalyst without SnO2 in this study, which may be caused by aggregation of SnO2particles.

Figure 2 shows Pt durability test results.  The ECA remaining rates for both of these catalysts are approximately same.

The detail results including the effect of weight ratio of SnO2, heat treatment temperature before and after Pt loading on the activity as well as the durability will be also report. 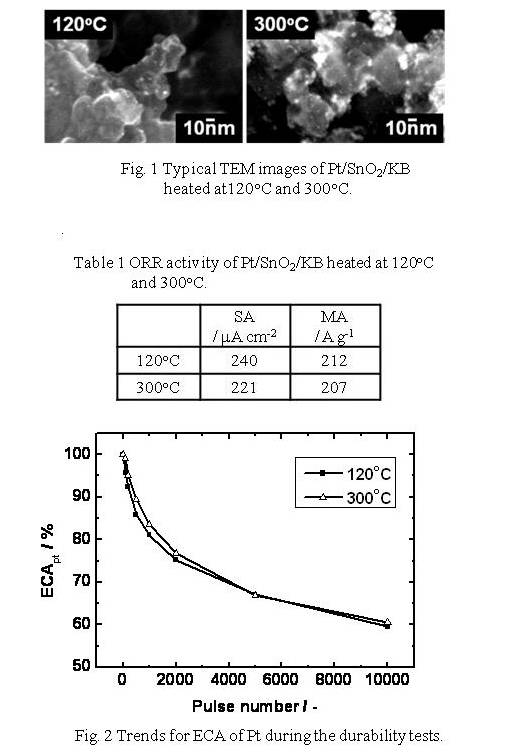