Sunrise, 2nd Floor, Star Ballroom 7 (Moon Palace Resort)
D. Carr and M. C. Kimble (Reactive Innovations, LLC)
Combustion of oxygen rich fuel vapors in aircraft fuel tanks can lead to explosions and fires. This was demonstrated unfortunately on July 17, 1996 with a Boeing 747 exploding in mid-air due to heated, highly explosive fumes in the center fuel tank. Sloshing of fuel, lightning and static discharge, and, for military aircraft, enemy ground fire can pose significant risks to the fuel tanks when the oxygen content is greater than 9%.

Given the importance of fuel safety for both military and commercial aircraft, improved fuel inerting systems are needed that make these fuel tank ullage vapors non-explosive. This is often done by adding a nitrogen-rich gas stream to the fuel tank to reduce the oxygen content to less than 9%, a level that mitigates combustible explosive mixtures. On-board inert gas generating systems (OBIGGS) have been used on aircraft where engine bleed air is used as a pressurized air source flowing through a zeolite adsorption bed to separate oxygen and nitrogen molecules. The resulting enriched nitrogen stream fills the tank ullage lowering the oxygen content to non-explosive limits, however, this occurs at the expense of engine power.

For certain military aircraft such as the V-22, the use of compressed engine bleed air to drive the separation process is not desirable, especially in landing zones that throttle back the compressor. For this reason, an electrochemically driven inerting system was developed by Reactive Innovations using a collection of membrane and electrode assemblies to remove the oxygen from the fuel and air mixture. The operating principle behind the separation process is to electrochemically reduce the oxygen in the fuel-air mixture to a water molecule that migrates via diffusion across a polymer ion-exchange membrane. On the opposing anode side, this water molecule is oxidized releasing protons that migrate to the cathode maintaining the separation process.  This process is shown in Figure 1.

The separator cell consists of a 5 mil thick Nafion membrane that is catalyzed with platinum on the cathode surface and catalyzed with a platinum/iridium oxide mixture on the anode. Air or a mixture of fuel and air flows over the cathode surface while an imposed voltage is applied to drive the process. The resulting current is measured over time while the cathode and anode outlet streams are sent individually to a gas chromatograph to measure the constituent concentrations.

To avoid introducing or using external water with this separator that could affect the fuel quality, the separation process uses the internal hydration state of the membrane to facilitate the electrochemical separation process. This requires that the diffusive water flux from cathode to anode is balanced by the electro-osmotic drag of water from anode to cathode. Operating the separator at too fast of a separation rate causes regions of the membrane separator to dry out lowering the transport rate. This behavior is shown in Figure 2 where an applied voltage of 1 to 2.5 volts was used to drive the process. Stable current profiles were obtained up to about 1.75 volts with higher applied voltages causing the current profiles to decay.

Cascaded operation was examined with one or two separators in series showing that the oxygen content in the tank ullage could be reduced to less than 9% as shown in Table 1. This indicates that the separator can be sized accordingly to extract the oxygen from the fuel-air mixtures. 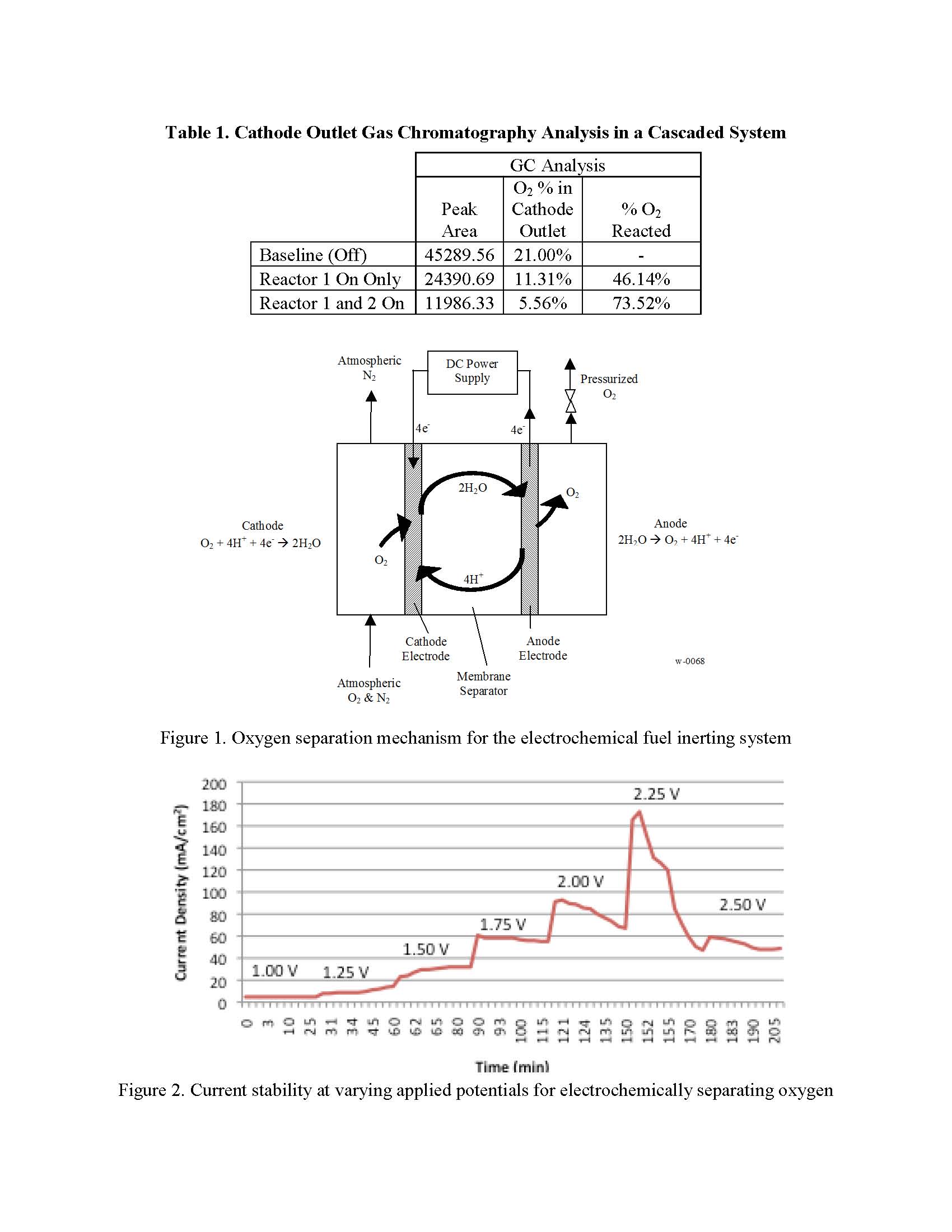