Sunrise, 2nd Floor, Star Ballroom 7 (Moon Palace Resort)
D. Carr and M. C. Kimble (Reactive Innovations, LLC)
A new hand-held inspection tool was developed to assess the presence, type, and degree of fatigue and crack damage in metal components used in military equipment. An inspection tool is needed that can be used to differentiate the type of crack once found whether it is induced from a one-time static load, or induced from fatigue, or even induced from stress-corrosion cracking.  A portable sensor that can help make these determinations without excising the material and analyzing it under laboratory conditions would help designers and maintenance personnel decide appropriate corrective actions to the damaged area.  Toward this need, a new electrochemical sensor probe was developed and used to assess fatigue and crack damage on three representative aerospace metals including aluminum 2024, high strength titanium grade 5, and high strength 4130 steel alloy. Figure 1 shows a schematic of this sensor probe that packages the elements used in classic wet-electrochemistry methods behind a membrane transducer. This probe can be touched against the metal coupons to non-destructively interrogate the metal via electrochemical methods to characterize the presence and type of damage.

The characterization mechanism we have developed is called Reactive Electrochemical Impedance Spectroscopy (REIS) that uses the presence of cracks and fatigue induced damage, if present, to react in situ when interrogated electrochemically. This electrochemical reaction response is simultaneously analyzed by electrochemical impedance spectroscopy giving a distinctive response pattern due to the nature, type, and extent of cracks and fatigue within the structure. The process interrogates the structure locally to react in situ absorbed moisture in its local environment while obtaining an impedance scan of the local structure. A comparison of impedance scans conducted with (energized) and without the induced reaction process (non-energized) is made where different signature responses indicate the presence and degree of cracks and fatigued damage.  Equivalent circuit models coupled with reaction processes allow us to assess the location and severity of the cracks helping to characterize it in support of in-service field repairs.

To demonstrate this electrochemical interrogation method, we assessed the degree of crack depth in a 2024-T3 Al component using the sensor probe. The process first measured an impedance scan on the Al coupon in the non-energized state. Subsequently, an applied potential less than 2 volts was applied to the aluminum component that liberated gas due to the presence of moisture in the crack while an impedance scan was taken (energized mode).  Measuring the resistance at 10 kHz taken in the energized and non-energized modes, a correlation is apparent when the resistance ratio (energized/non-energized) is plotted versus the crack depth as shown in Figure 2. Deeper cracks expose more surface area, which gives more surface area to react the adsorbed water molecules affecting the EIS response.

Application of this sensor and evaluation methodology to assess the level of fatigue on a metal surface was also examined. Figure 3 shows the spectrum response for three levels of fatigue on a metal coupon. The key feature to examine is the difference in the impedance response from the energized to non-energized mode and where the difference in this impedance response increases as the fatigue damage increases. For a low to no fatigued system, the surface morphology gives similar spectrum despite whether the surface is energized or not energized. However, higher levels of fatigue change the surface morphology evidenced by the distinct spectrum response between the energized and non-energized modes.

Equivalent circuit models are used to develop algorithms to aid in interpreting the response data, and ultimately to inform the operator of the type and degree of metal damage. 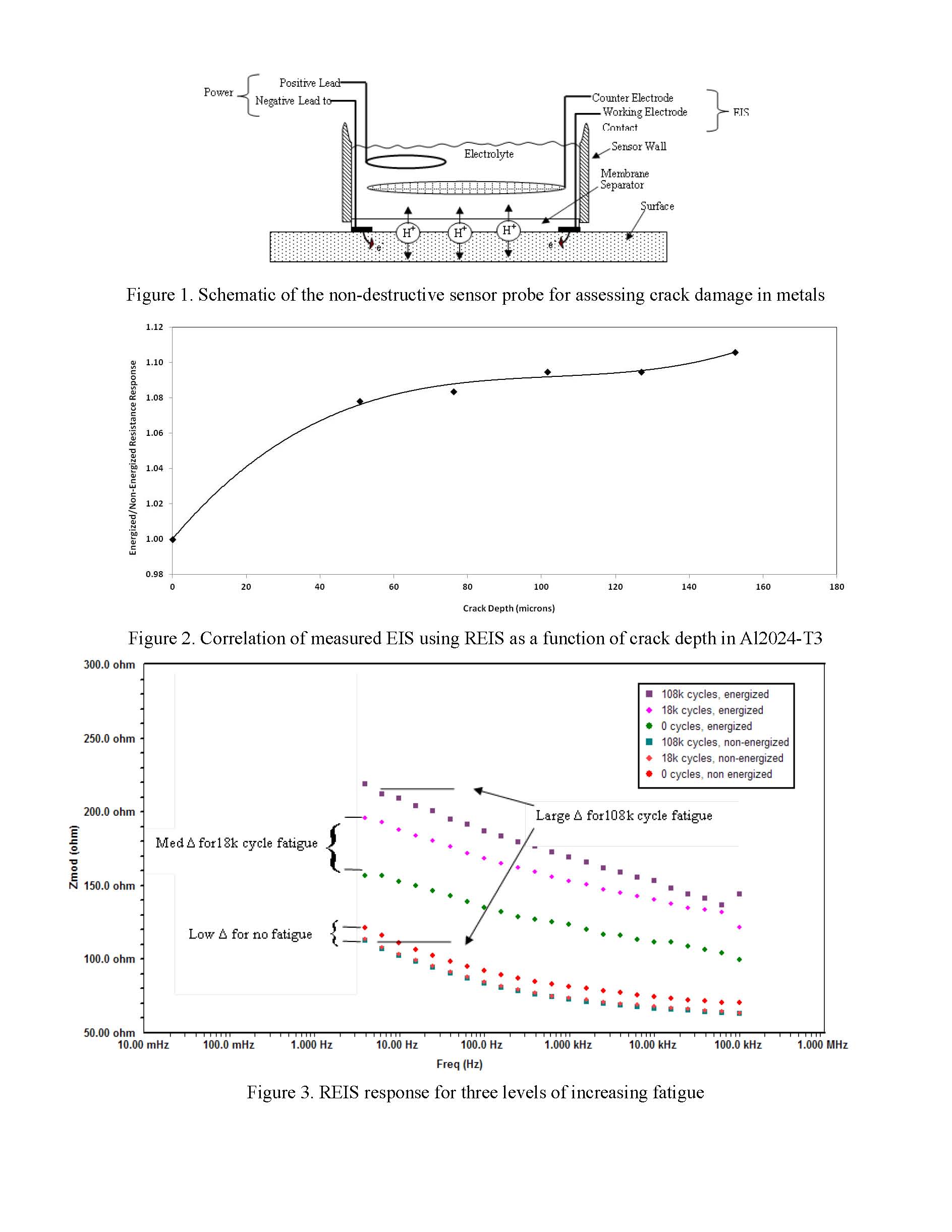