1171
Investigation the Conductivity of a Bulky Phosphonium Cation Functionalized Aems

Our preliminary study on 1,4,5-trimethyl-2-(2,4,6-trimethoxyphenyl) imidazolium functionalzed polyphenylene oxide indicated that the modification of imidazolium cation by attaching 2,4,6-trimethoxyphenyl group could help to increase the polymer chemical stability because of both electron donating function as well as steric effect. Hence, adding three 2,4,6-trimethoxyphenyl groups on the high basicity phosphine expects to display a promising durability under the alkaline condition. Gu Shuang5,6 developed a stability study on tris(2,4,6-trimethoxyphenyl) phosphonium functionalized AEMs under different temperatures with different alkaline concentrations. He claimed that the ionic conductivity could maintain for 48h when immersing the membrane either into 10M KOH at room temperature or in 1M KOH at 60

Besides, since the volume of tris(2,4,6-trimethoxyphenyl) phosphonium is pretty large, the size of the hydrophilic domain as well as the pattern of aggregations when absorbing water probably are different with small volume cations and display its unique property, thus, directly affect the morphology of the membrane so that further influence the transport property and conductivity performance. This sensitivity on morphology bringing from big volume cations further study by using of various solvents, which have different interactions with cationic groups during the solution cast of the membrane. Membrane fabrication is another critical process towards generating well-developed electrolyte membranes with ideal fuel cell performance. The structure of the polymer is shown in Figure 1. It is interesting to investigate how do different solvents influence the conductivity (electrochemical impedance spectroscopy) of the generated membranes and the correlatations with the morphology (atomic forced microscopy, transmission electron microscopy) and transport property (pulsed field gradient NMR). The study potentially provides a method for the enhancement of the conductivity.

The authors thank the Army Research Office for support of this research under the MURI grant number #W911NF-10-1-0520. The Advanced Photon Source operated for the U.S. Department of Energy (DOE) Office of Science by Argonne National Laboratory, was support by the U. S. DOE under Contract No. DE-AC02-06CH11357. 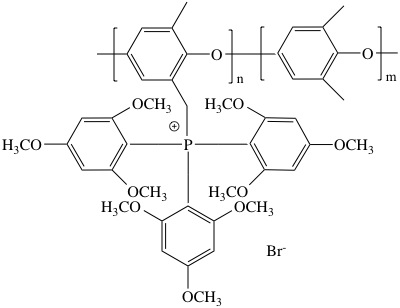