Expo Center, 1st Floor, Universal 18 (Moon Palace Resort)
E. T. Yu, C. Hu, M. D. McDaniel, A. B. Posadas, A. A. Demkov, and J. G. Ekerdt (University of Texas at Austin)
Resistive switching in TiO2 has been studied extensively for resistive random access memory and other applications in nanoelectronics; nearly all of these studies have employed polycrystalline or amorphous TiO2.  We have used atomic layer deposition to grow single-crystal anatase TiO2 thin films on Si (001) substrates, with single-crystal SrTiO3 grown by molecular beam epitaxy serving as a buffer layer between the TiO2 and the Si substrate.  Resistive switching devices are then fabricated with the bottom electrode consisting of the SrTiO3/Si substrate, and the top electrode formed by deposition of 5-8nm Ti followed by 160nm Au [Figure 1(a)-(b)].  Highly stable bipolar resistive switching and very linear current-voltage characteristics in the on (low-resistance) state are consistently observed [Figure 1(c)-(d)].  For a subset of devices studied, the single-crystal TiO2 was annealed after 3nm deposition, resulting in formation of oxygen vacancies in that layer.  In all the devices, deposition of Ti for the top electrode also creates oxygen vacancies near the top of the TiO2 layer.  The oxygen vacancies, created either by annealing or by Ti deposition, play a key role in the bipolar resistive switching processes observed.  Detailed analysis of electrical behavior in these devices reveals that switching between the high-resistance and low-resistance states occurs via an electrochemical metallization-like mechanism in which oxygen vacancies form a highly conductive filament during the device SET process, which then dissolves during the RESET process.  Extremely high resistance ratios between the off (high-resistance) and on (low-resistance) states – as high as 107 – are regularly observed, which we attribute to the highly insulating nature of the single-crystal TiO2 layer.  In addition, we observe that the on-state conductance can be controlled quite precisely and reproducibly via the compliance current imposed during the measurement, and assumes values that are integer multiples of G0 = 2e2/h, the fundamental quantum of conductance for a single-mode ballistic conductor.  At compliance currents of 10-200µA, on-state conductance can be controlled to within a single quantum of conductance by imposing a given compliance current during the device SET process (Figure 2).  These results demonstrate substantial advantages of single-crystal TiO2 as a material for resistive switching devices, and suggest a variety of avenues for integration into high-density memory arrays and elucidation of issues relevant to scaling potential. 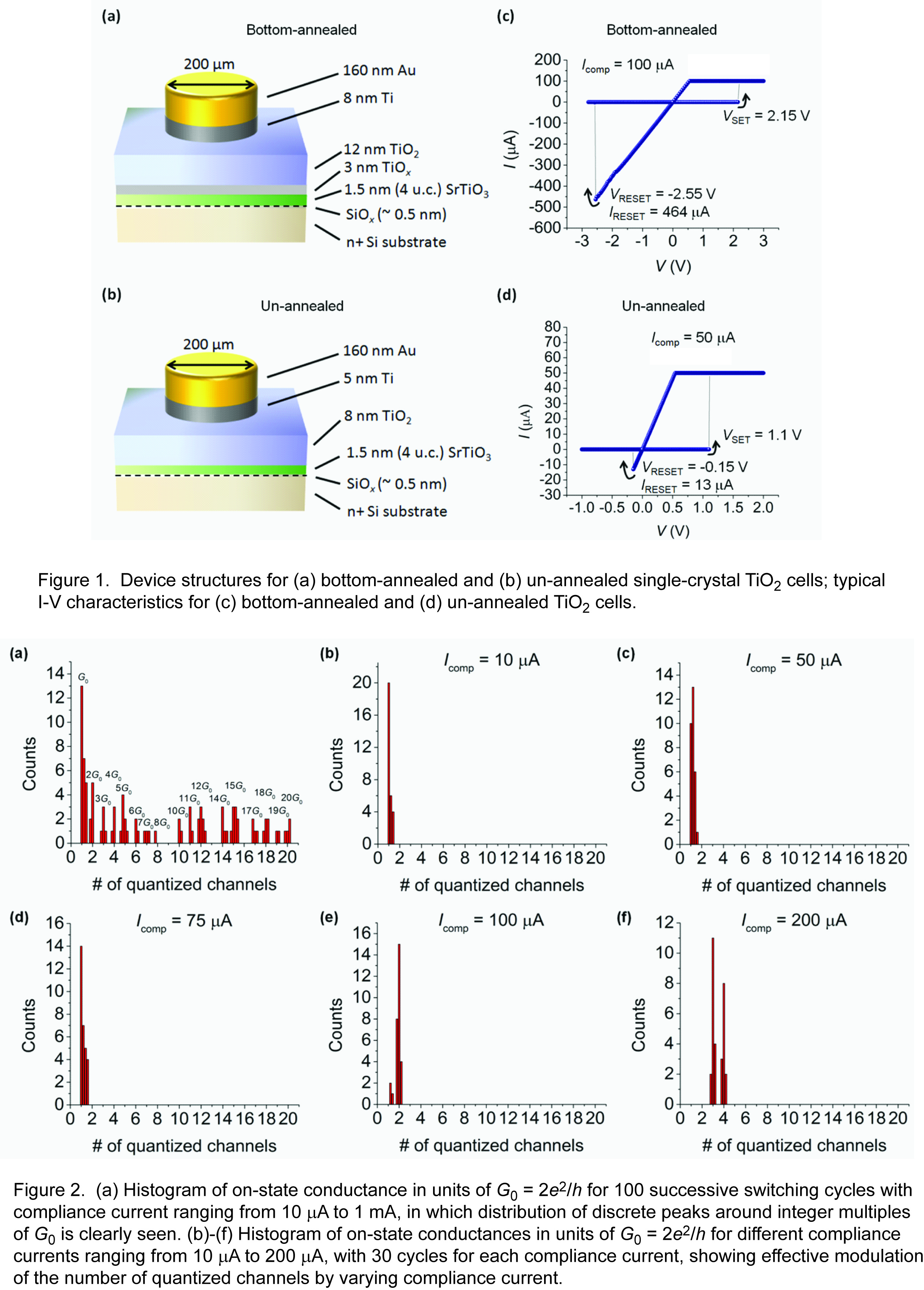