Expo Center, 1st Floor, Center and Right Foyers (Moon Palace Resort)
C. G. Lee (Hanbat National University)
Ash free coal extracted from a bituminous coal and carbon made from Oak were served as fuels in a direct carbon fuel cell and their oxidation behaviors were compared in terms of temperature, coal to carbonate ratio, and gas compositions in the cell. The ash free coal had much higher OCV and voltage at polarization states than carbon fuel at 650oC. Dominant product gases from the coal were H2and CO, while carbon had carbon monoxide in the tested range. Therefore difference in the oxidation process would be existed between the two fuels.

Coal is relatively abundant energy source compared with other fossil fuels. Regardless of its abundance and long history of usage, inconvenience of its use reduces coal consumption at present. Coal as a solid fuel has a big problem of remaining ash in its use. Ash free coal has been attempted to overcome the problem. So far, ash free coal can be produced by two ways; one is removing ash compounds with acids and alkalines in the coal, calling UCC(Ultra Clean Coal), and another one is extracting organic compounds from the coal with organic solvents, named by ash free coal.

In this work, ash free coal was produced by a micro-wave method with a polar solvent of NMP. For the comparison of oxidation behavior, carbon made from Oak was employed in this work. The electrochemical oxidation behaviors of coal and carbon were investigated with respect to temperature, coal to carbonate ratio, and gas compositions in a coin type direct carbon fuel cell (DCFC).

The raw coal used in this work was Berau bituminous supplied by KEPRI in Korea. Carbon was made in-house, for 2 hrs at 400oC under N2 environment. A coin type direct carbon fuel cell was fabricated by molten carbonate fuel cell technology. The diameter of electrodes was about 3 cm. The anode was porous Ni-Al alloy, and the cathode was porous Ni. The matrix was made of LiAlO2. The long alumina tube at the upside of the cell was installed for the coal supply to the anode. A mixture of 62 mol% Li2CO3 and 38 mol% K2CO3 was served as electrolyte. The cathode gas was 70 % air and 30 % CO2. More details of the DCFC operation was described in a previous work [1]. The normal H2 fuel for the anode was H2:CO2 = 0.125 L/min: 0.025 L/min with ca. 5 % of H2O. Temperature ranged from 923K to 1123K. Coal to carbonate ratios were 3g to 3g, 3g to 1g, and 1g to 3g. Gas compositions in the cell were analyzed with a gas chromatography (HP 5890II).

Figures 1 and 2 show OCV behaviors of fuel change from the normal H2 fuel to carbon fuel and ash free coal, respectively at 650oC, 750oC, and 850oC.  The carbon fuel was a mixture of 3 g of carbon and 3 g of Li-K carbonates, while the ash free coal was a mixture of 3 g coal and 3 g of Li-K carbonates. Before 0 s the OCV was determined by the H2 fuel. After 0 s the carbon fuel shows only one minimum in the OCV whereas the coal does two minimums. The difference was attributed to the different gas species that carbon produced mostly CO species, while the coal gave H2 and CO as dominant gas species. In particular, very low OCV is observed at carbon fuel of 650oC, which indicates that very small reaction species in the condition. Very low gasification of carbon is the reason at the condition. On the other hand, coal fuel shows much higher OCV at 650oC. Rather easy gasification of ash free coal can be the reason. The main gas species of coal were CO and H2 because the hydrocarbon species in the coal is readily gasified even at 650oC. Similar amounts of CO and H2 were measured at the coal fuel in the anode chamber. The H2gas is generally more active than CO gas in the oxidation. Then the difference in the oxidation process between coal and carbon can be existed.

This research was supported by Basic Science Research Program through the National Research Foundation of Korea (NRF) funded by the Ministry of Education, Science and Technology (2011-0009748). 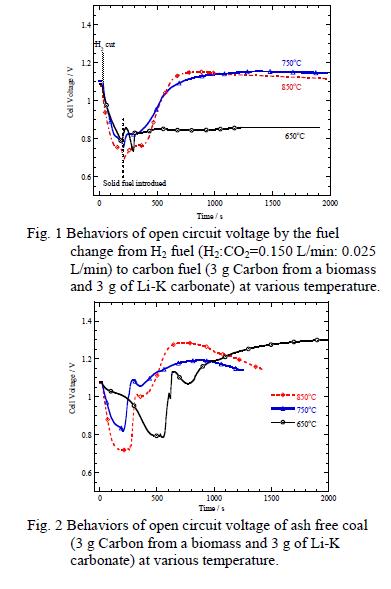