Expo Center, 1st Floor, Center and Right Foyers (Moon Palace Resort)
H. Nakajima and K. Matsutani (Tanaka Kikinzoku Kogyo K. K.)
The lack of water in the polymer electrolyte fuel cell (PEFC) causes the loss of cell performance; not only in the polymer electrolyte membrane but also in the cathode catalyst layer because of the decrease of the proton conductivity of binder ionomer [1, 2], catalyst utilization [3], and so on.

To improve the cell performance under the dry condition, several studies of the improvement of the catalyst layer were tried, for example, microporous layers [4].  Recently heat treatment of catalyst was applicated to improve stability.  It causes the decrease of cell performance under the dry condition even it was used at the cathode side [5].  To recover the cell voltage, in our previous study, cathode Pt catalyst itself was modified [6].  Cell voltages at RH=31% of modified catalysts were around 70-80 mV higher than that of unmodified Pt/HSAC catalyst.  Cell voltages at RH=100% were almost the same (Fig. 1.).  These families of modified catalysts were effective both low RH and high RH.

For the practical use, the durability of these modified cathode electrocatalysts is also the main issue.  In this study, it was examined under low relative humidity cell operation.

The manner of modification of catalysts was described in ref. [6].  One approach was to introduce hydrophilic group such as organic sulfonic group to Pt catalyst.  Pt / HSAC (Pt content = c.a. 50 wt%, Surface Area of carbon= c.a. 800 m2 g-1, Not heat treated) was used as base Pt catalyst.  The introduction method was referred to ref. [7].  MEAs were prepared using these modified Pt catalysts as cathode and the cell voltages were measured at 0.8 A cm-2 and RH=31%.  Cell temperature was 80oC.  Anode gas and cathode gas were H2and Air, respectively.  The ratio of ionomer to carbon (in catalyst) in MEA was 0.6.  This I / C ratio was lower than the best ratio in view of cell performance to reduce the effect of the water in ionomer. 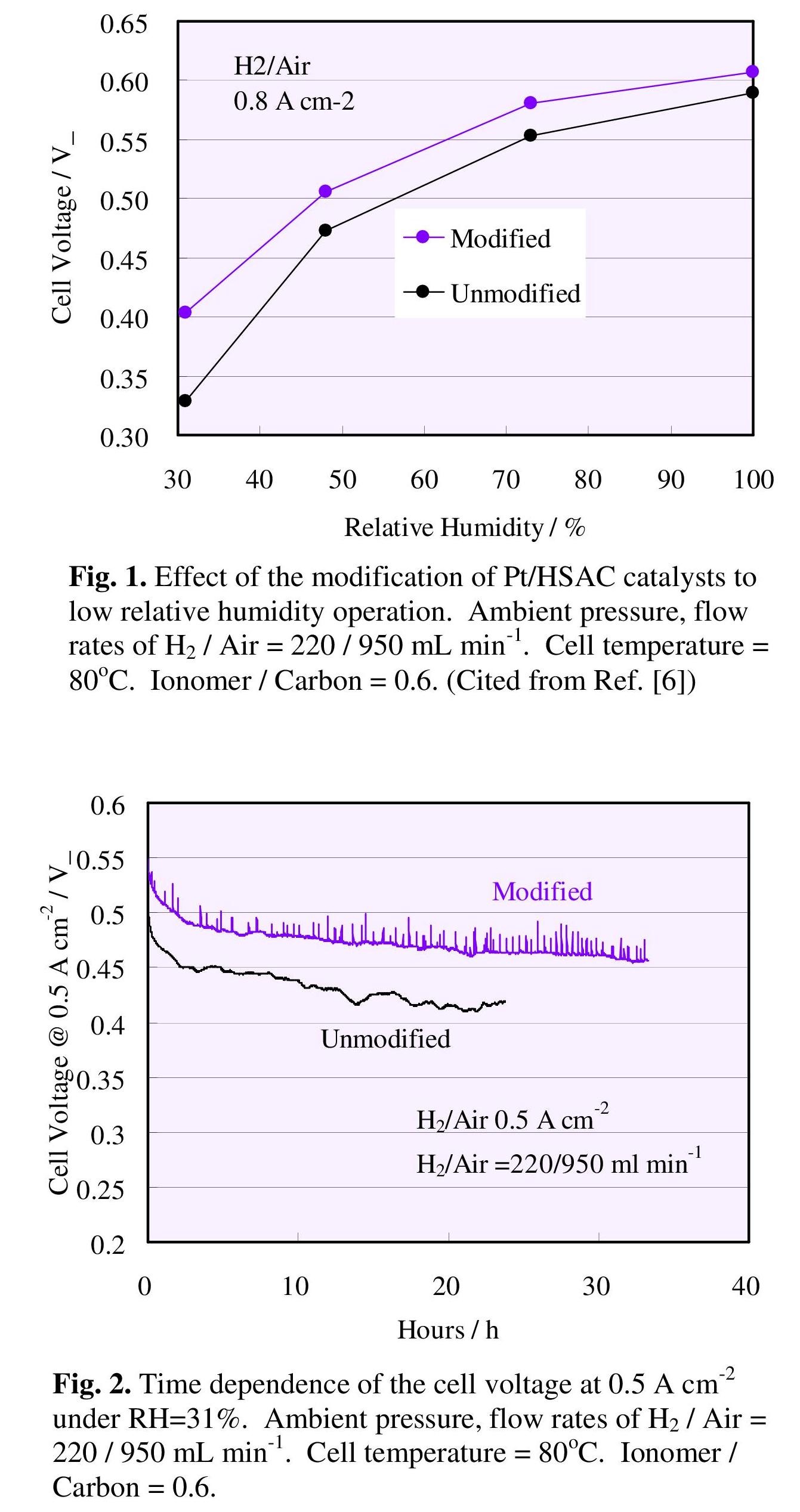