Polymer electrolyte fuel cells (PEFCs) have been attracted for both automobile and residential use. However, PEFCs still have some problems to be solved, such as durability. In particular, during the actual operating condition of fuel cell vehicles (FCVs), carbon supports, which have advantages of high conductivity, high specific surface area, and high porosity, are easily degraded through oxidation at the cathode side. Therefore, in our laboratory, SnO2 supports were rather focused on as popular alternative oxide-based support materials because of their thermodynamic stability. Durability as electrocatalysts has been confirmed in the half-cell [1, 2]. Nevertheless, the agglomeration of SnO2 particles leads to low performance when MEAs are made with SnO2 based electrocatalysts. Thus, the objective of this research is to develop MEAs with high performance and durability using SnO2supports.

Nb-doped SnO2 was prepared to increase the electric conductivity in this study. Sn0.98Nb0.02O2 was synthesized via an ammonia co-precipitation method, using SnCl2・2H2O and NbCl5. Pt nanoparticles were decorated on such a metal oxide support utilizing a platinum acetylacetonate complex. I-V characteristics of MEAs were evaluated as well as their ohmic resistance measured by an impedance method. Further, based on the protocol recommended by the Fuel Cell Commercialization Conference of Japan (FCCJ) [3], Durability of MEAs was investigated at the potential cycle of 1.0 ~ 1.5V, and also their microstructures were evaluated by a field emission scanning electron microscope (FESEM).

By comparing the durability of MEAs made with three different cathode electrocatalysts, such as Pt/Carbon, Pt/Sn0.98Nb0.02O2, and Pt/Sn0.98Nb0.02O2+5wt.%VGCF-H (a conductive filler), MEA made with Pt/ Sn0.98Nb0.02O2+5wt.%VGCF-H showed the highest performance and durability [4]. Furthermore, optimization of the ratio of Nafion and VGCF-H was performed. As shown in Fig. 1, MEA with Pt/ Sn0.98Nb0.02O2+25wt.%VGCF-H+13wt.%Nafion showed highest I-V performance in this study. The microstructure with good distribution of conductive fillers is also shown in Fig. 2. This suggests that it is possible to reduce the ratio of Nafion and further optimize the amount of VGCF-H. Durability and microstructures of MEAs will be discussed in detail. 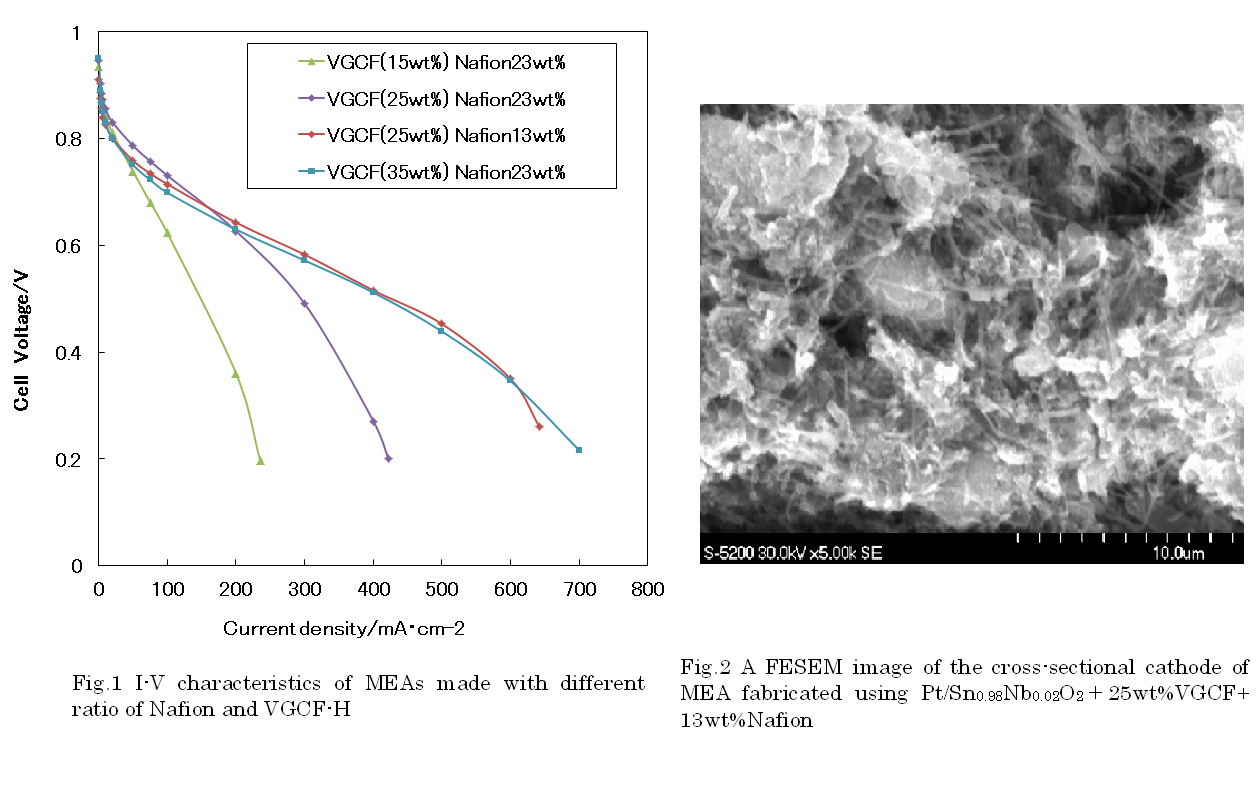