Expo Center, 1st Floor, Center and Right Foyers (Moon Palace Resort)
S. Akabori, K. Suzuki, Y. Tabe, and T. Chikahisa (Hokkaido University)
In polymer electrolyte fuel cell (PEFC), the catalyst layer (CL) of the cathode needs a large amount of Pt because of the slow oxygen reduction reaction. Since electron, proton, and oxygen are necessary for the cathode reaction, achieving the optimum structure of electrode CL and the efficient transport of the reactants is significantly effective to reduce the usage of Pt catalyst. In this study, the effects of the cathode CL structure on the IV characteristics were evaluated by a model analysis, and superior fabrication methods were investigated experimentally for efficient use of Pt catalyst.

Figure 1 shows a schematic diagram of the cathode CL model, here the identical carbon agglomerates with the electrolyte film are dispersed uniformly in the CL (1). In the z-axis of the thicknesses direction, the origin and z = δCL are the interfaces between polymer membrane and CL, and between CL and gas diffusion layer (GDL), and number of the carbon agglomerates per unit volume in the CL, nag, is calculated from the parameters for the CL structure.

The proton current density in the CL, iH+, can be expressed by Eq. 1 from the balance of generated current and oxygen consumption.Here, F is Faraday’s constant, Sag is the surface area of a carbon agglomerate is the effective proton conductivity. The oxygen consumption, JO2ag, corresponds to the oxygen flux in the radial direction of carbon agglomerate at the surface. From the model analysis with various CL structures, it was shown that the increase in total surface area of agglomerates is effective for better IV characteristics.

To evaluate the cause of the improvement of the IV characteristics, the pore size distributions were compared between with the ball mill and with the stirrer mixing, as shown in Fig. 3. The distribution of the secondary pore diameters (20-100nm) is affected by the mixing method of the catalyst ink. For the ball mill with strong mixing intensity, the mode pore diameter is slightly smaller and the total volume of the secondary pores is larger than those for the stirrer, indicating increase in the total surface area of the secondary pores. This means that the total surface area of the agglomerate may also increases, contributing to the performance improvement.

Thus, it was confirmed by the measured polarization curves and pore size distributions in the catalyst layer that the increase in total surface area of the agglomerates is effective for improving the cell performance. However, the quantitative relationships between the pore size distribution of the secondary pores and the diameter distribution of the agglomerate particles are not clear. We are investigating these relationships and the detailed effect of the measured CL structure on the measured IV characteristics by model analyses. Elucidation of appropriate CL structure and proposal of the structure control method for efficient use of Pt catalyst in the fabrication process are our future works. 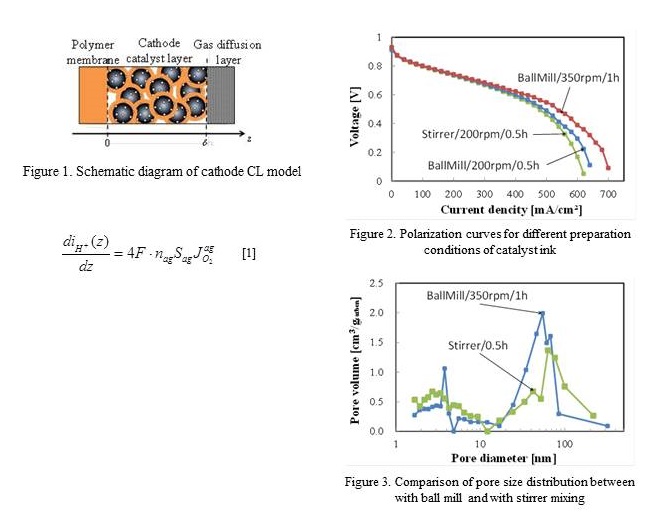