High temperature sodium (Na) batteries with β”-Al2O3 ceramic electrolyte, such as sodium-sulfur (NaS) battery of NGK and ZEBRA battery of FIAMM or GE, received much attention for their potential for grid-scale storage due to their high capacity and energy efficiency. However, the high operating temperature of over 300°C increases the manufacturing costs as well as the operation costs. In contrast, SK Innovation, in collaboration with Ceramatec, Inc., is developing an affordable high capacity battery module. In this project, proprietary Ceramatec NaSICON [2,3] has been used to develop a molten sodium battery. This highly conductive NaSICON, with sodium ion conductivity of an order of 10-2 Scm-1, allows for the battery to operate at the intermediate temperature of less than 195 °C. This is a potential opportunity to provide a cheaper alternative to high temperature batteries.

Contrary to literature reports, the NaSICON (Sodium Super Ionic Conductor) ceramic has shown stability when in direct contact with molten sodium at elevated temperature [2,3]. The primary advantages of NaSICON over β”- Al2O3, the ceramic separator used in Na-S and Na-NiCl2batteries, are (1) better conductivity at the target intermediate temperature, (2) stability against water and solvents, and (3) significantly lower production costs [4].

The inherent advantages of the high ionic conductivity and chemical stability of NaSICON at an intermediate temperature range enable an improved performance of high temperature Na batteries even below 195°C. One such chemistry is the sodium/metal-halide battery. This battery utilizes a molten Na metal as a negative electrode, in direct contact with the NaSICON separator, and a metal-sodium halide as a positive electrode in a various catholytes with high ionic conductivity. The relevant electrochemical reactions for the Na/metal-halide are:

The net reaction is:

In this study, we will present new high ionic conductivity electrolytes at the operating temperature range of 180°C-195°C. These electrolytes show larger ionic conductivity than sodium tetrachloroaluminate (NaAlCl4), used in the Zebra battery, and maintains similar electrochemical stability. Simultaneously, we prepared several types of cathodes with sodium-halide materials and compared the performance with different electrolytes. Fig. 1 shows the charge/discharge profile for several cycles of the cell using high ionic conductivity electrolyte, NaSICON and Na/Ni-halide cathode at 180°C. The cell was charged at the current density of 10mA/cm2 and discharged at 25mA/cm2. The charge/discharge energy efficiency was around 92%. 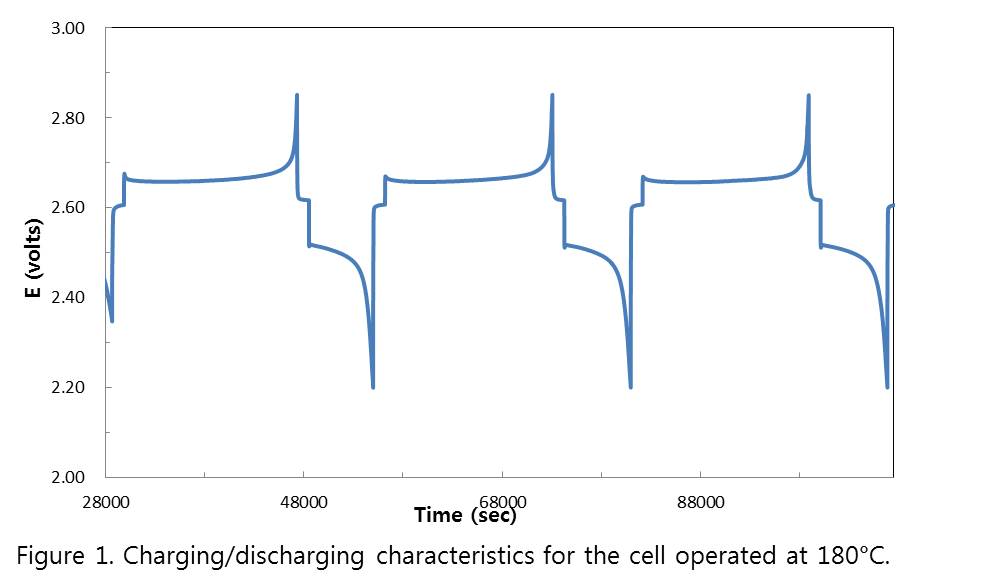