Expo Center, 1st Floor, Center and Right Foyers (Moon Palace Resort)
J. A. Nogueira, P. P. Lopes, and H. Varela (IQSC-USP)
Proton exchange membrane fuel cell (PEMFC) shows very small polarization losses when operating on pure H2. However, these losses become drastic when even small amounts of CO are present. Thus, to achieve CO tolerance, several Pt bimetallic alloys have been proposed [1]. In addition, bimetallic electrocatalysts such as PtRu or PtPd, may lead to the emergence of autonomous potential oscillations. Nevertheless, it has been reported that operating a fuel cell under oscillatory regime might result in increased efficiency [2].

The currently accepted mechanism for the emergence of oscillations during the oxidation of H2/CO in PEMFC is based on the interplay among the variables such as anode overpotential and the coverage of different species.

An interesting way to study mechanisms involved on this behavior is coupling outcome of potential variation over time with another technique, such as on line Mass Spectrometry. Recently, it has been demonstrated by our group the occurrence of oscillations in the CO2 production. These oscillations are in phase with the cell potential oscillations in a PEMFC where the catalyst anode was PtRu [3]. As mentioned above, PEMFC systems containing PdPt/C as anode catalyst also present spontaneous potential oscillations in a similar way as PtRu/C [4]. To the best of our knowledge, for the first time we show this behavior using Pd/C anode. In the present contribution, we explore PEMFC equipped with a Pd/C anode and fed with H2/CO. Experiments were conducted galvanostatically. In addition, to measuring oscillations of potential, we have obtained through the attachment online Mass Spectrometry the mass/charge ratio 44 amu, which is relative to CO2 production.

Figure 1: Occurrence of sustained oscillations in the anode overpotential (j = 160 mA cm-2) and in the CO2production when Pd/C is the anode catalyst.

As shown in Fig. 1, the overpotential oscillations are in phase with the oscillations in CO2production. This corroborates with the accepted mechanism, where in galvanostatic regime, the CO present in the anode feed blocks the surface due to its strong affinity with the catalyst. In order to keep the current, the cell overpotential gradually increases. In sufficiently high overpotential, the CO electro-oxidation rate exceeds its adsorption rate. Therefore, free sites are formed and the oxidation of H is allowed, the current increases and the overpotential decreases rapidly. The conditions are reversed and the cycle repeats [5].

One reason for overpotential oscillations in PEMFC with Pd/C anode is due to its less noble character, i.e., the formation of oxygen species on Pd in potential lower than that for Pt. 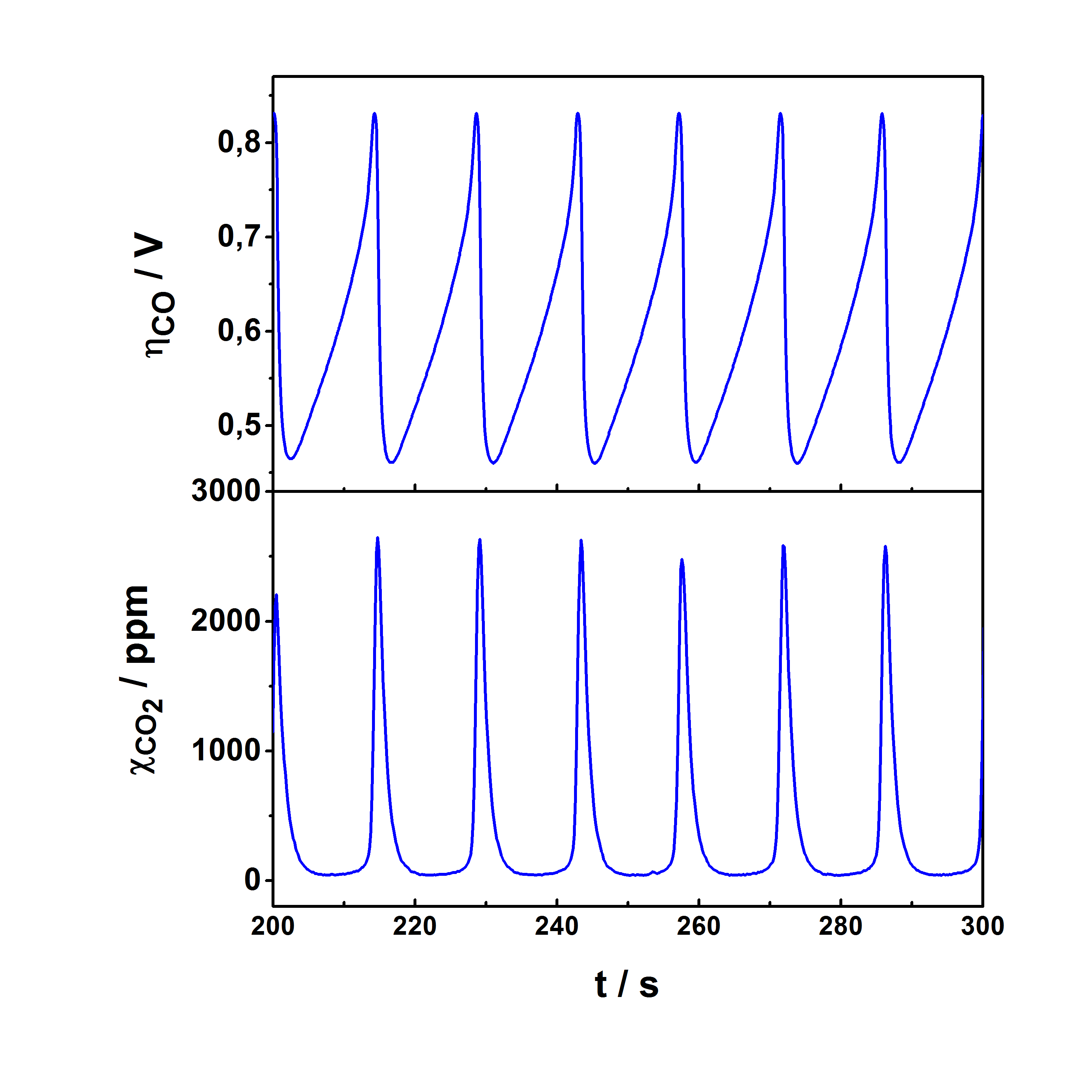