Expo Center, 1st Floor, Center and Right Foyers (Moon Palace Resort)
A. Koyama, K. Fukami (Department of Materials Science and Engineering, Kyoto University), T. Yamauchi (Department of Advanced Materials Science and Technology, Niigata University), N. Nishi, T. Sakka (Kyoto University), A. Kitada (Department of Materials Science and Engineering, Kyoto University), and K. Murase (Department of Materials Scinence and Engineering, Kyoto University)
Two-dimensional growth of conducting films at interfaces has been paid attention as a novel process for thin film formation. We have investigated fabrication of conducting polymer thin films at an insulative substrate/liquid interface by electropolymerization. A peculiar liquid structure, where concentrations of monomers differ from those in the bulk solution, is formed near the solid surface. The high concentration of monomer is achieved by choosing an appropriate combination in the affinity among the solid surface, solvents, and solutes [1]. In other words, the concentrations of the solutes near the surface are tunable by designing the affinity. Therefore, the morphology of the conducting polymer should be influenced by the highly-concentrated region of monomers in the vicinity of the insulative surface. In the present study, electropolymerization of pyrrole on the hydrophobic or hydrophilic insulative substrates is evaluated. We mainly discuss the impact of the hydration property of the substrates on the two-dimensional growth.

Pyrrole was electropolymerized in an aqueous solution containing 0.4 M pyrrole and 0.8 M LiClO4at the applied potential of 1 V vs. Ag/AgCl sat. KCl for 1 hour. The insulative substrates were immersed in the aqueous solution, and a platinum rod as the working electrode (WE) was perpendicularly contacted to the substrates (Figure 1). The counter electrode (CE) was a platinum ring. Polytrifluoroethylene and borosilicate glass were used as hydrophobic and hydrophilic insulative substrates, respectively. In some experiments, glass substrates whose surfaces were modified with dimethyldichlorosilane to make the surfaces hydrophobic were used.

Two-dimensional growth of polypyrrole thin films was observed both on the polytrifluoroethylene and hydrophobic glass substrates. In contrast, the lateral growth of polypyrrole along the insulative substrate was not prominent when using the hydrophilic glass substrate. As shown in Figure 2, the fabricated thin films have the thickness on the order of micrometers. Compared with the length of the films in the growth direction, growth rate in the lateral direction was about hundreds times faster than that toward the vertical direction. Such a lateral growth on the hydrophobic substrate cannot be explained by the Marangoni convection caused by a gradient in surface tension along the interface, although the convection is often regarded as the origin of lateral growth of electrodeposited metal thin films grown at liquid/liquid interfaces [2]. The lateral growth should take place because pyrrole molecules, which are regarded as hydrophobic solute, can be preferentially concentrated near the hydrophobic surface compared with in the bulk solution, while they are excluded from the vicinity of the hydrophilic surface. 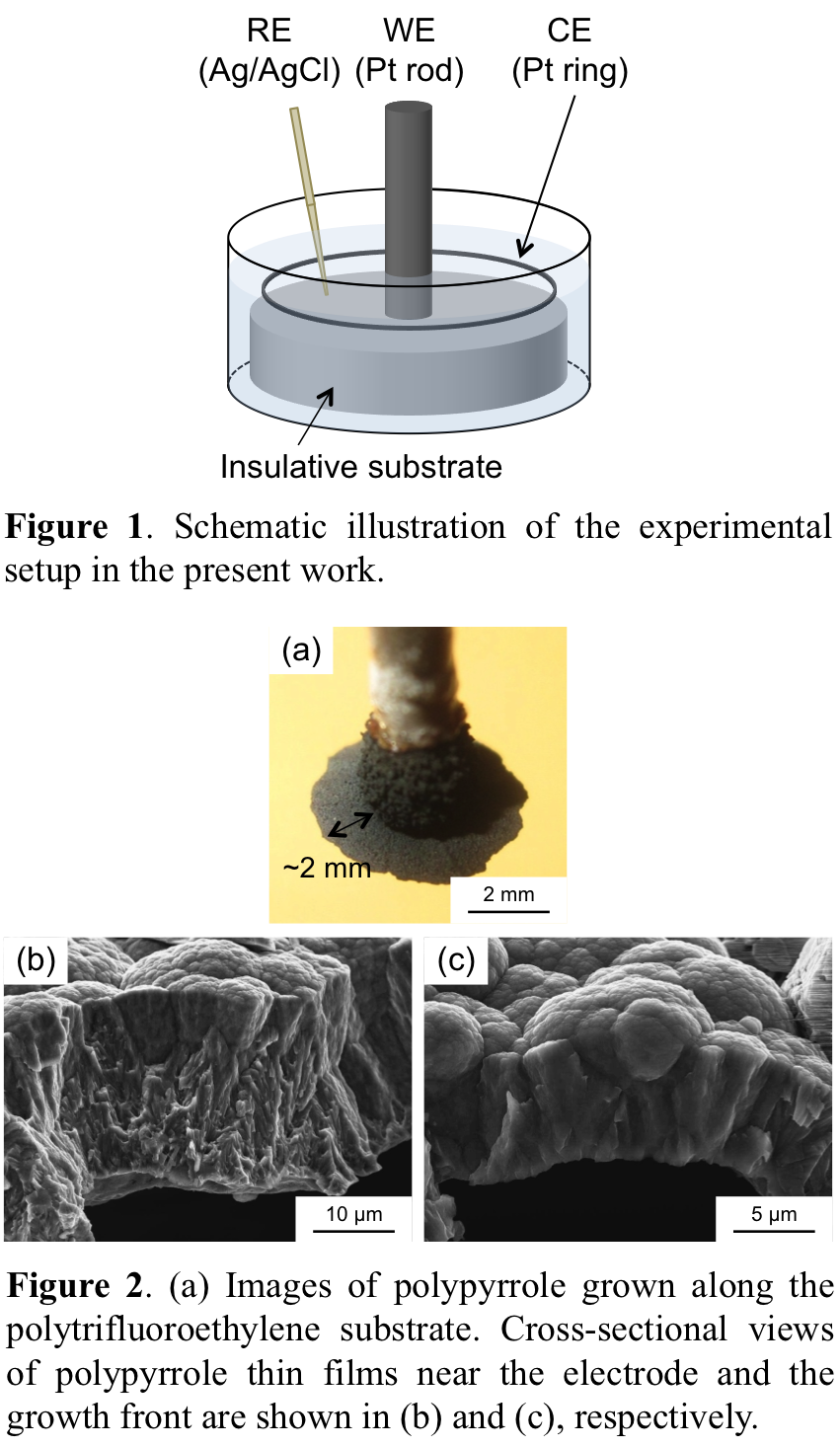