To improve the a-IGZO TFTs characteristic and stability, the double active layer with a-IGZO/a-SIGZO was invested. The TFTs have an inverted staggered bottom gate structure with a channel width (W) of 500 µm and a channel length (L) of 50 µm. A 60 nm thick double active layer is grown by sputtering at room temperature, which contains 40 nm thick front-channel of a-IGZO and 20 nm thick back-channel with a-SIGZO by using cosputtering a-IGZO target and SiOx target at room temperature. Si concentration is changed with the rf power which split into 30, 40, 50, and 60 W.

Figure 1 shows the transfer curves of the TFTs with various Si concentrations in a-SIGZO channel layer. As increasing Si concentration in back-channel, the IDS is lowered and the Vth shifted in the negative direction. The electrical properties reveal that Si is acting as a carrier suppressor due to reducing VO in the a-IGZO system. The bonding-strengths of silicon (775KJ/mol) is higher than those of zinc (385KJ/mol), and indium (<470KJ/mol).[3]

Figure 2(a) shows that the Vth of the conventional a-IGZO TFT was negatively shifted from 26.7 to 21.4 V. The H2O molecules was adsorbed on the a-IGZO from the high humidity conditions lead to the decrease of the Vth. It may be attributed by the increase of carrier density in the a-IGZO bulk-channel due to the role of H2O molecules as donor. Compared to the conventional a-IGZO TFT, there are almost no difference on the Vth value between as-deposited sample and that of after 15 days, as shown in Fig. 2(b). The maximum and minimum of Vth are 30.7 and 29.6 V, respectively. It is reasonable that Si-metal cation suppress the formation of VO during the stability test. Additionally, SiO2 distributed on the a-IGZO surface reduce H2O adsorption site on a-IGZO back-channel surface.[4] As a result, the TFTs with a Si-doped a-IGZO back-channel improve the electrical stability under temperature and relative humidity stresses

In our presentation, we will review the mechanism why the co-deposition of SiOx enhance the stability of a-IGZO TFT by analyzing the standard electric potential (SEP) and bonding strengths of Si.

Fig. 1. (a) The representative transfer characteristics of various sputtering powers of TFTs and (b) extracted subthreshold swing (S.S.), mobility and threshold voltage with various Si concentrations.

Fig. 2. Evolution of the transfer characteristics for (a) conventional a-IGZO TFT, (b) a-SIGZO / a-IGZO TFT, and (c) variation in Vth for different active layered TFTs as a function of high temperature and relative humidity exposure. 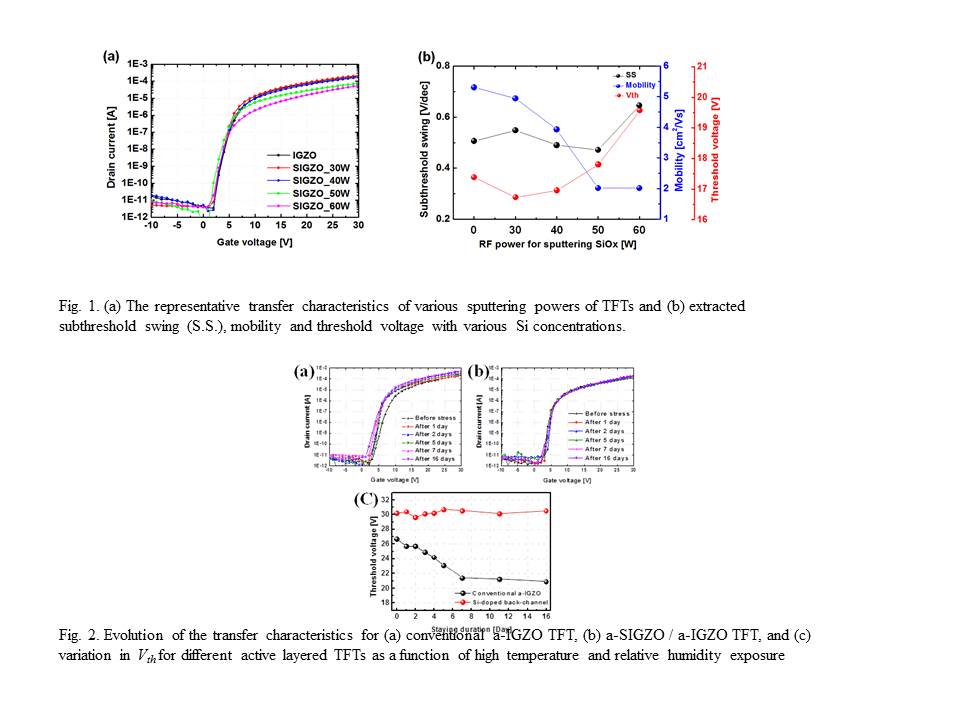