Results obtained from electrochemical measurements including cyclic voltammetry and galvanostatic charge-discharge suggest that PPy/CP films synthesized at slower scan rates demonstrate superior supercapacitive performances. For example, PPy-50 is capable of delivering a highest areal capacitance of 14.9 mF/cm2, followed by PPy-100 with 11.1 mF/cm2 and then PPy-200 with 3.7 mF/cm2, respectively, at a current density of 0.5 mA/cm2. Modelings built on the electrochemical impedance spectroscopy (EIS) data suggest a facilitated charge transfer and demonstrate much more energy stored in both the electric double layer capacitor and the pseudocapacitor elements in the equivalent circuit for PPy/CP films prepared at a smaller scan rate. The PPy-50 also shows excellent long term stability and retains nearly 83% of its original capacitance after 1000 cycles, compared to only around 70% for PPy-100 and PPy-50. This study suggests the possibility of fabricating PPy based binder free pseudocapactors with high performances via the facile potentiodynamic synthesis at lower scan rates.

Pyrrole (C4H5N, ≥98%) and potassium nitrate (KNO3,≥99.0%) were purchased from Sigma Aldrich. The free-standing PPy/CP nanocomposite films were prepared via the potentiodynamic electropolymerization of pyrrole monomers onto pure carbon paper performed on VersaSTAT 4 potentiostat (Princeton Applied Research) in air. A typical electrochemical cell consisting of a reference electrode, a working electrode, and a counter electrode was employed. A saturated calomel electrode (SCE) electrode served as the reference electrode and a platinum (Pt) wire as the counter electrode. A typical electrochemical polymerization was performed 2 cycles scanned from 0 to +1.2 V vs. SCE at a scan rate of 50, 100, and 200 mV/s for 2 cycles, respectively, in aqueous solution containing 0.05 M pyrrole and 0.1 M KNO3. The free-standing nanocomposite films obtained were used directly as the supercapacitor electrodes.

Figure 1(A) depicts the typical CV curves of the PPy/CP nanocomposite films at a scan rate of 0.5 V/s within a potential range of -0.4 to 0.6 V in 1.0 M H2SO4. The PPy/CP films exhibit potential dependent current densities, characteristics of pseudocapacitive behaviors.1-5 The well-defined redox peaks (I/I') observed in the three PPy/CP composite films are attributed to the oxidation and reduction of PPy.6

The PPy-50 exhibits the largest enclosed CV area, indicating the most energy stored in the material.2 In consistent with the CV results, the galvanostatic charge-discharge measurement at a current density of 0.5 mA/cm2, Figure 1(B), gives a highest the areal capacitance of 14.85 mF/cm2 for PPy-50, followed by 11.09 and 3.65 mF/cm2for the PPy-100 and PPy-200, respectively. The Ragon plots, Figure 2, shows that PPy-50 demonstrates the highest energy densities while possessing similar power densities to those of PPy-100 and PPy-200.

PPy-50, PPy-100, and PPy-200 nanocomposite films have been electropolymerized on to carbon papers via CV techniques at a scan rate of 50, 100, and 200 mV/s, respectively. These free-standing nanocomposite thin films were directly used as supercapacitors and the electrochemical performances were evaluated. The PPy-50 exhibits the superior performances in terms of redox reversibilities, areal capacitances and energy densities. The results show that more energy can be stored via EDLC and pseudocapacitors when synthesized at lower scan rates.

The financial supports from Seeded Research Enhanced Grant (REG) and College of Engineering at Lamar University are kindly acknowledged. 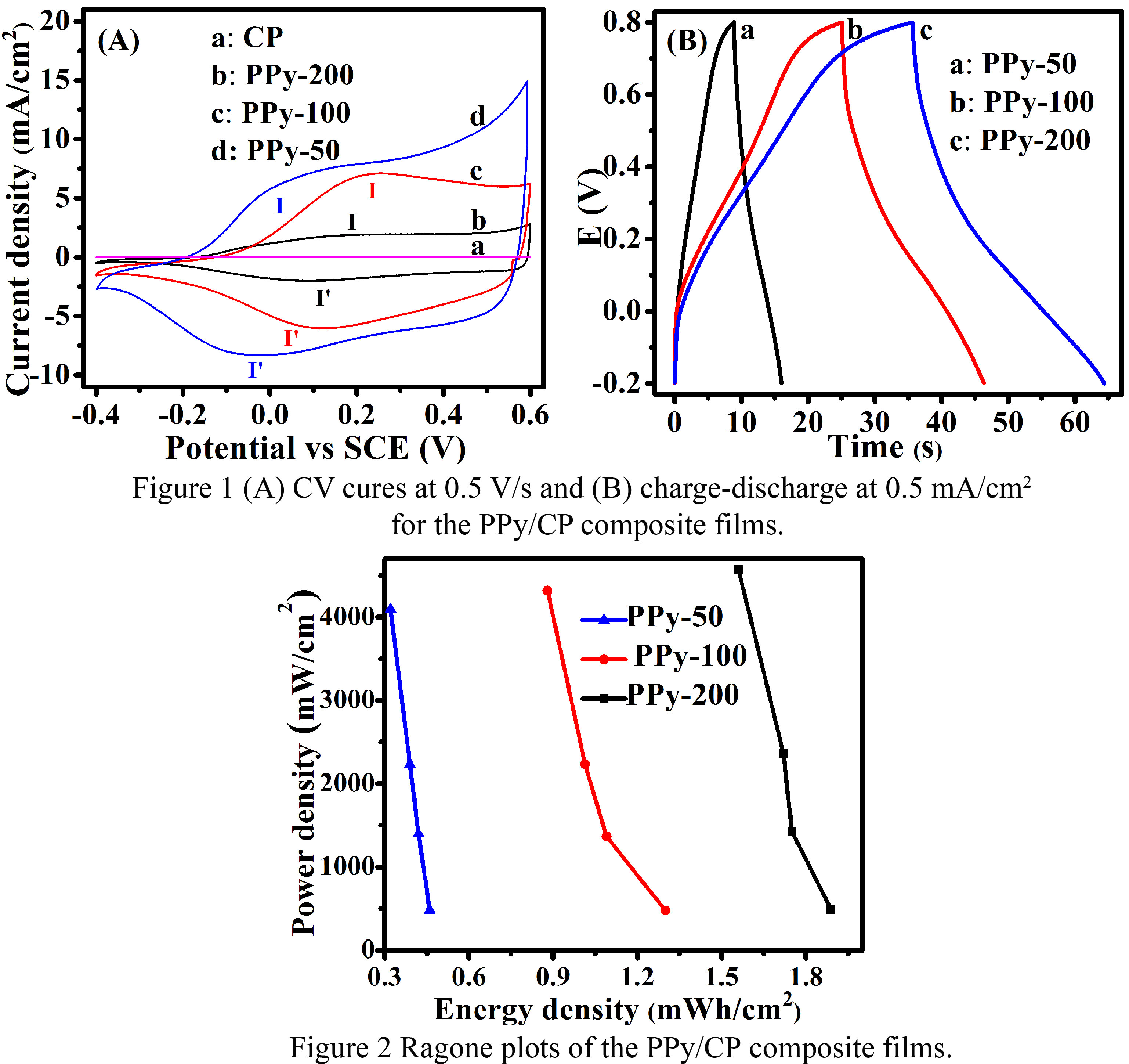