Carbon monoxide contaminations in hydrogen reforming from hydrocarbon can cause a serious problem for PEFC performance [1]. Even a commercial platinum–ruthenium alloy catalyst which well-know as the highest CO tolerance cannot accept H2 with CO contamination higher than 300 ppm. The highly dispersed and high-alloy degree Pt2Ru3/C was found to be much higher CO tolerance than that of commercial Pt2Ru3/C [2]; however, effect of carbon support was still unclear. Resorcinol-formaldehyde Carbon gel is attracting more attention for its high electrical conductivity, high surface area and mesoporosity; moreover, pore characters are adjustable by vary of synthesis condition [3]. In this work, effect of porosity of carbon support on CO tolerance was investigated.

Rc1400 ac42 and ac58 have meso-micro pore structure with bimodal pore size distribution. In Table 1 , it showed that an increase in degrees of activation from ac0 to ac42, only mesopore increases with maintaining regular mesopore structure of Rc1000, and not much micropore increased (compare with later result) resulting in increase in BET surface area. But form ac42 to ac 58, degree of activation increased with micropore volume from 0.471 to 1.576 cm3g-1. Crystallite size of metal particle also depend on density of micropore, Pt2Ru3/RC1400ac0 showed biggest crystallite size at 4.2 nm. Following by commercial Pt2Ru3/C but other two catalysts was 2.3-2.5 nm. It can be seeing that surface area have direct relation to crystallite size but after some point there are not much effect. As in case of Pt2Ru3/RC1400ac42 and Pt2Ru3/RC1400ac58, even surface area was very different (1215 m2g-1) but the crystallite size was not much diffent (0.2 nm)

These studies could lead to significant knowledge of metal support interaction, and Resorcinol-Formaldehyde carbon gel can be a promising support for future development of CO tolerance catalyst for PEFC.

This work was partly supported by the New Energy and Industrial Technology Development Organization (NEDO) Japan. 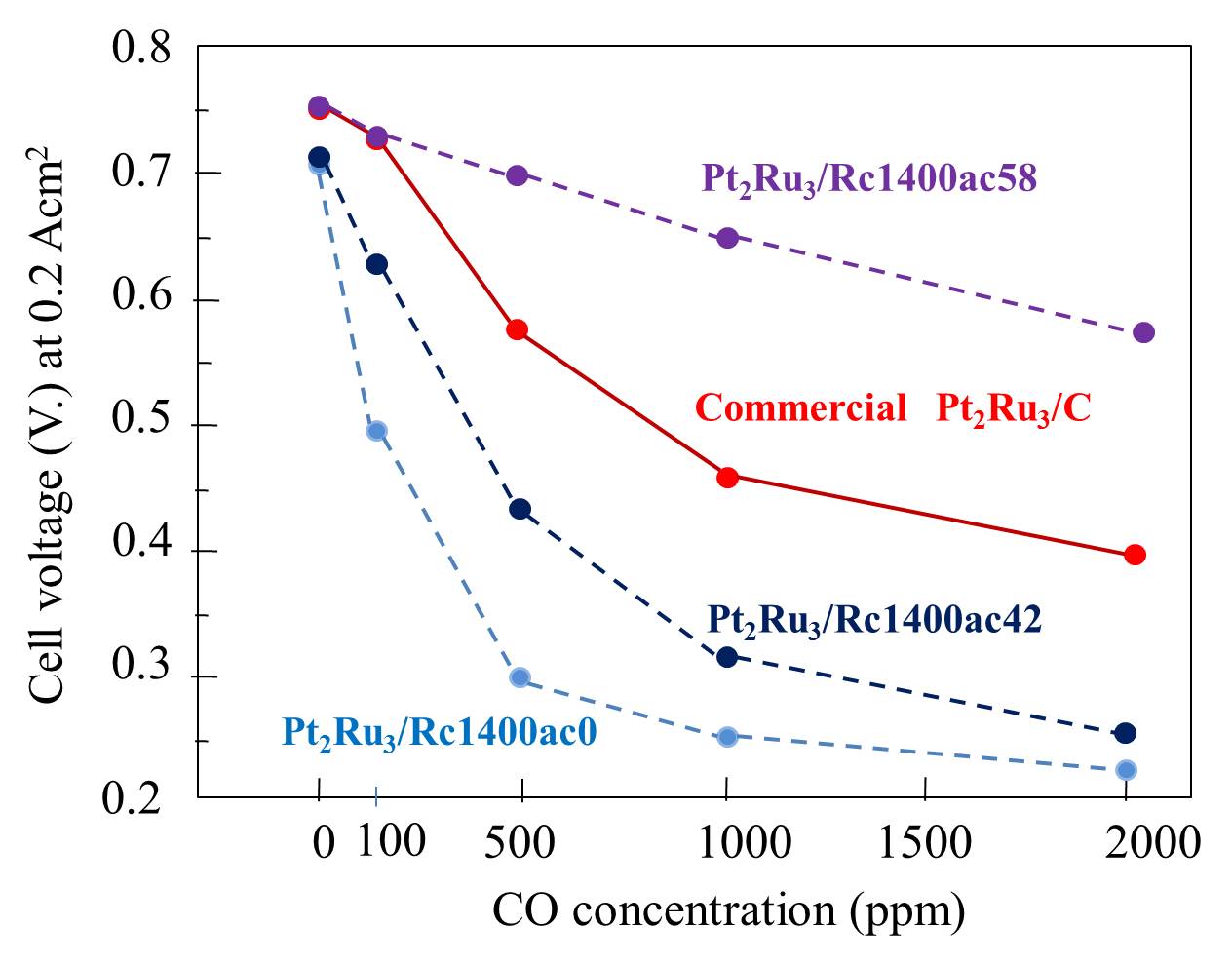