Sunrise, 2nd Floor, Galactic Ballroom 8 (Moon Palace Resort)
S. Shimpalee, V. Lilavivat (University of South Carolina), S. Hirano, B. Pence, D. Wilkosz, M. DeBolt, and G. Saloka (Ford Motor Company)
Distributions in reactant species concentration in a Proton Exchange Membrane Fuel Cell (PEMFC) cause distributions in local current density, temperature and water over the area of a PEMFC. These can lead to effects such as flooding and dehydration thus causing stresses in different regions of the fuel cell [1]. Changing operating conditions and design parameters including their properties inside PEMFC system such as flow field configurations, gas diffusion layer (GDL), and membrane electrode assembly (MEA) could impact the cell performance and uniformity in distributions [2-4]. Providing high oxygen concentration in the cathode at high current density operations is critically important to enhance the area specific power density [5, 6]. Thus, mass transport overpotential at high current density is the major barrier to achieving high power density with acceptable operational robustness. Experimental investigation of mass transport is not sufficient to understand mass transport overpotential because of its inability to resolve water saturation-dependent properties in the gas diffusion layer (GDL). An objective of this work is to develop a multi-phase modeling capability to simulate fuel cell performance at high current density region where mass transport overpotential is dominant. Material and design solutions arising from the implementation of this mathematical model are expected to enhance area specific power density of conventional state-of-the art PEMFCs.

The conventional computational fluid dynamic (CFD) technique will be used to predict the heat and mass transports in macro-scaled flow-field geometry as shown in Fig. 1. The CFD based meso-scaled Thermal Lattice Boltzmann Method (TLBM) will be introduced to give the solution of gas/liquid transport solution in the porous media. A TLMB GDL model with fixed boundary conditions, such as a constant volumetric injection over an entire GDL surface, represents ex-situexperimental conditions very well [7]. Figure 2 shows an image of the simulation for the condensed water percolated through the GDL. A unique aspect of this work will be to integrate the TLBM GDL model with a CFD based fuel cell electrochemistry model so that the GDL boundary conditions will be dynamic and the water flux entering the GDL will be a function of the dynamic and local water production within the catalyst layer. This fully-integrated simulation will yield a direct prediction of the hydrated in-situ performance by enabling the natural development of water distribution within the GDL. This multi-scaled modeling technique will be able to facilitate the development of advanced mass transport design, which is material sets of GDL and flow field interaction, to enhance the performance and the operational robustness. 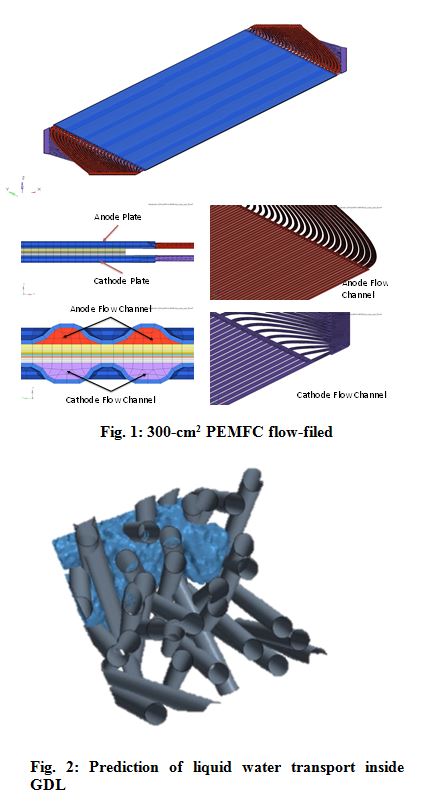