Sunrise, 2nd Floor, Galactic Ballroom 8 (Moon Palace Resort)
M. Secanell (University of Alberta), A. Putz (Automotive Fuel Cell Corporation), P. Wardlaw, V. Zingan, M. Bhaiya, M. Moore, J. Zhou, C. Balen, and K. Domican (University of Alberta)
Over the past two decades a myriad of polymer electrolyte fuel cell mathematical models have been proposed in the literature [1]. Fuel cell models with different mass, heat and charge transport, and electrochemical reaction mechanisms have been studied. Multi-scale catalyst layer representations, such as agglomerate models, have also been presented. Even though a large number of mathematical models have been proposed, direct comparisons of different catalyst layer models have seldom been performed. A detailed quantitative assessment of the effect of different physical processes, such as thermal-osmosis in water transport, has also not been performed. Such comparative studies have been difficult to undertake because most polymer electrolyte modeling work in the literature is typically based on different governing equations and/or a different set of fuel cell input parameters.

OpenFCST is a finite element method based, open-source, mathematical modeling software for polymer electrolyte fuel cells. The aim of the software is to develop a platform for collaborative development of fuel cell models and for assessing the impact of different models in the literature. The software is well documented, contains several sample models, and it is available for download online at http://www.openfcst.mece.ualberta.ca/. The software currently contains a library of governing equations that includes Fick's law of diffusion, Ohm's law, the adsorbed water transport model proposed by Springer et al. [2], a thermal model including thermal osmosis and heat of sorption, and a database of electrochemical equations including models for multi-step reaction mechanisms for the oxygen reduction reaction and the hydrogen oxidation reaction. The software also contains a database of fuel cell materials including several catalyst layer representations such as a macro-homogeneous catalyst layer, an ionomer-filled agglomerate based catalyst layer, and a water-filled agglomerate based catalyst layer.

In summary, an overview of the first open-source, multi-dimensional, finite element based, polymer electrolyte fuel cell software in the literature is presented. The software can be used to analyze any type of membrane electrode assembly. In this presentation, it is used to analyze the effect of different kinetic models, boundary conditions, and agglomerate composition recently proposed in the literature. 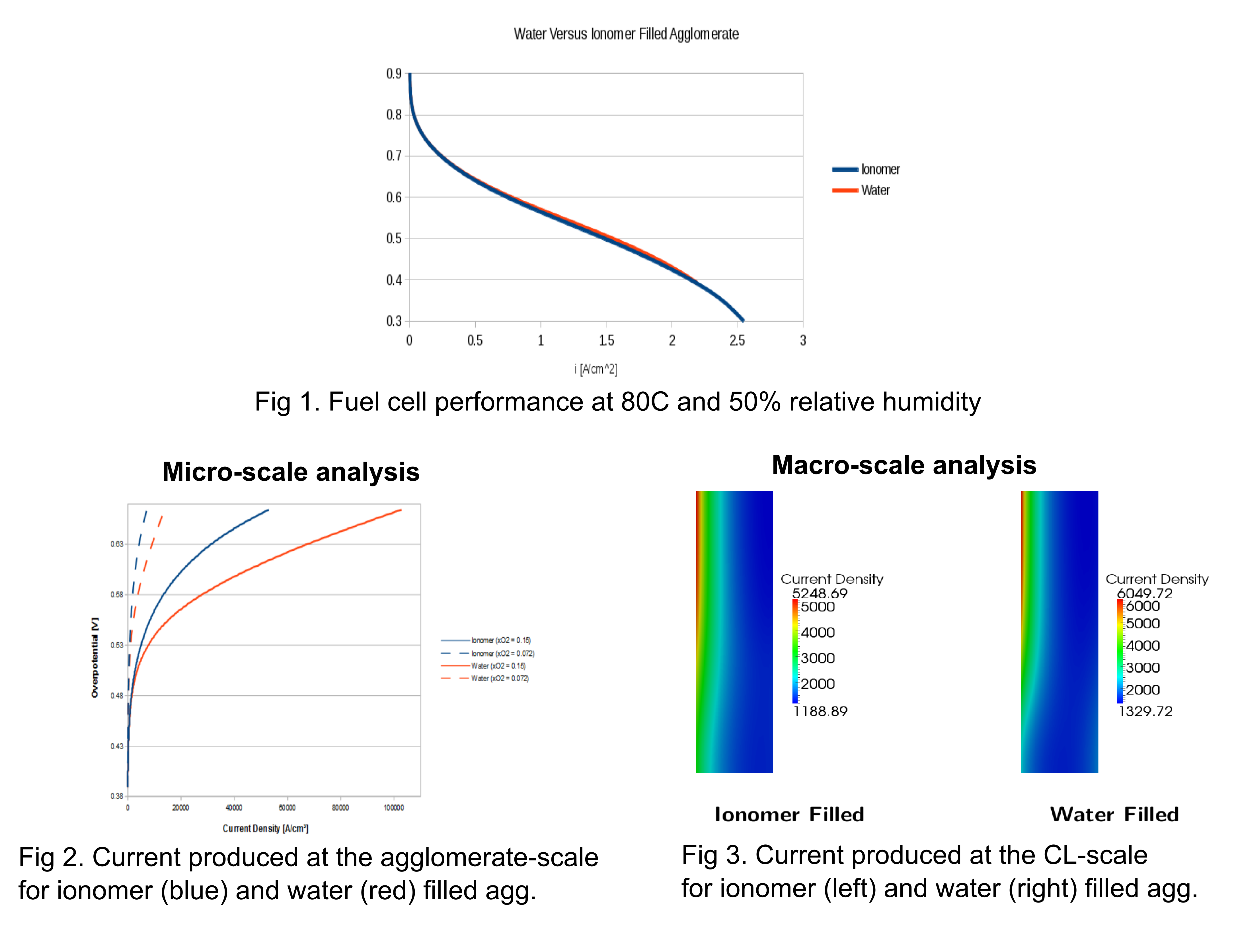