Sunrise, 2nd Floor, Galactic Ballroom 8 (Moon Palace Resort)
M. A. Uddin, U. Pasaogullari, and T. Molter (University of Connecticut)
Polymer electrolyte membrane (PEM) is a key component of polymer electrolyte membrane fuel cell (PEFC). It is vulnerable to cationic impurities that are present in the air and fuel stream or that may have originated from the cell, stack or balance of plant components. Almost all foreign cations have higher affinity to sulfonic acid group than proton and the presence of foreign cation in the membrane or catalyst layers results in reduced ionic conductivity, increased electro-osmotic drag, and reduced water content (1).

In this study, a steady, one dimensional cation (Na+) contamination model of membrane electrode assembly (MEA) of PEFC (shown in figure 1) is developed by solving the coupled transport phenomena related to the foreign cation, water, and oxygen. Concentrated solution theory is utilized to solve the cation transport equation based on Serincan et al.’s model (2) and dilute solution theory for water, hydrogen, and oxygen transport. A spherical agglomerate model is considered in the cathode catalyst layer (CCL) to describe effects of foreign cations in the catalyst layer. To separate the effects of cations on different transport phenomena, first no contamination case is solved and then contamination effects are added one by one to the cation transport, water transport, and oxygen transport and finally to the Nernst equation.

Cation (Na+) contamination in the air stream found to cause several detrimental effects on the performance of PEFC. The main effects are: (a) cation replaces proton and occupies sulfonic acid sites in ionomer. It can occupy up to 96% sites in the cathode catalyst layer (CCL); (b) It causes serious water depletion in the ionomer due to decrease in water diffusivity; (c) It decreases the oxygen diffusivity causing a decrease in dissolved oxygen concentration in CCL; and (d) It decreases the open circuit voltage (OCV) in CCL due to reduction in proton concentration in the ionomer phase. These contamination effects on each parameter decrease the protonic current density and combined effects result in a reduction of current density from 0.72 A/cm2 to 0.25 A/cm2at a cell voltage of 0.7 V (shown in figure 2).

The authors are grateful for the financial support of the Department of Energy (DOE)-EERE, DE-EE00000467 (University of Hawaii, prime contractor, Jean St-Pierre, PI). 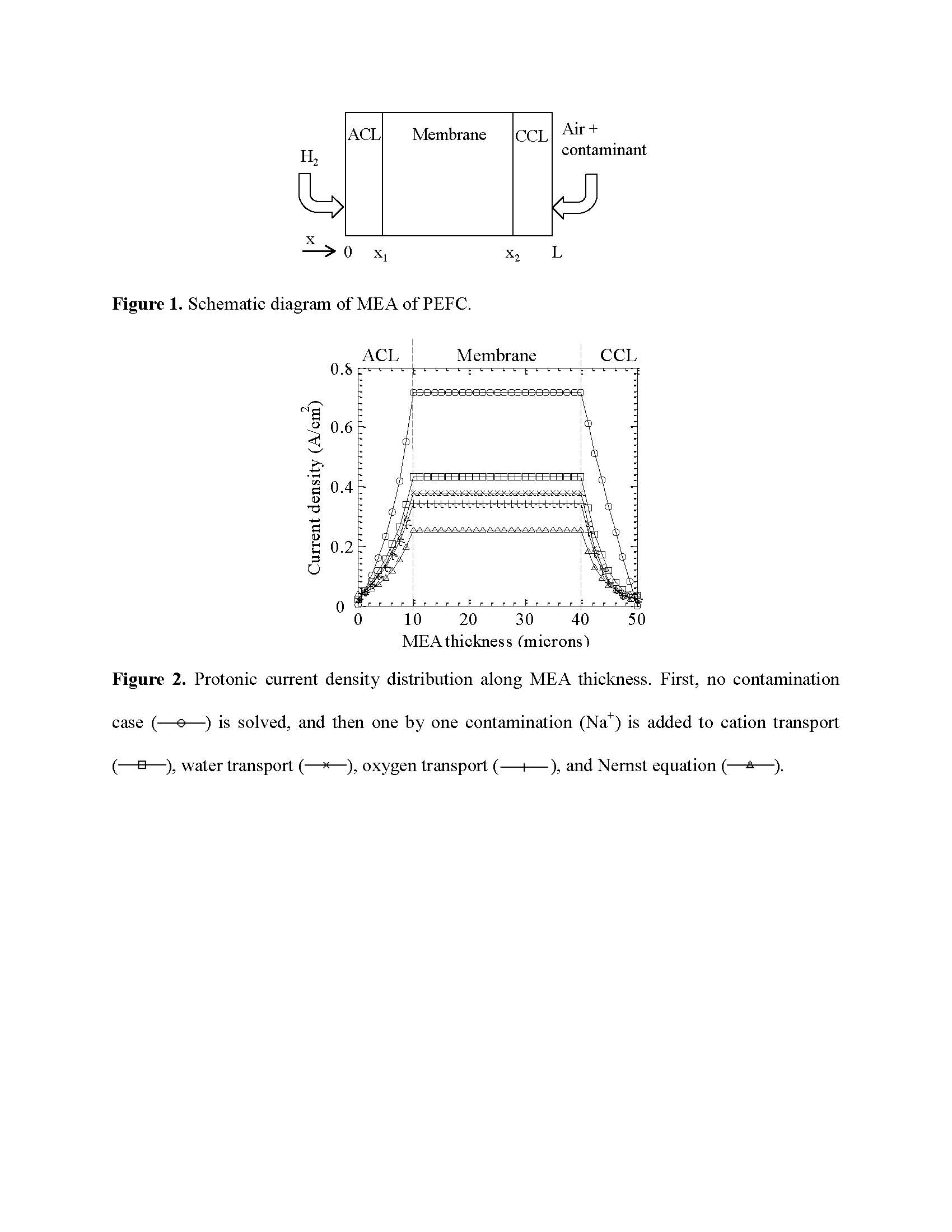