Expo Center, 1st Floor, Center and Right Foyers (Moon Palace Resort)
A. Rovetta and M. E. G. Lyons (Trinity College Dublin)
Finding alternative ways to access a reliable source of clean energy has become a major issue in recent years due to the ever dwindling supplies of carbon based fuels combined with an increased environmental awareness associated with the use of such fuels. Hydrogen generation via alkaline water electrolysis is one of the emerging electrochemical solutions to a potential 21st century hydrogen economy. [1,2] A major barrier to the widespread use of this technology to the generation of molecular oxygen, or the oxygen evolution reaction (OER) at the anode as it is kinetically demanding and inefficient compared to the cathodic hydrogen evolution reaction (HER) at commercial operating current densities. Currently the most effective OER catalysts are based on the platinum group metals, but however, due to their high cost of production their use is limited. The use of less noble metals based on Fe or Ni, which show a good catalytic behavior for the OER, can significantly reduce the cost for the large scale use of alkaline water electrolysis.

To be competitive with existing anode materials such as RuO2 and IrO2 [3,4], key parameters such as a low OER onset over-potential coupled with high OER current densities, have to be demonstrated by future metal oxide electrodes. However RuO2 and IrO2 dimensionally stable anode (DSA) materials can exhibit instability under prolonged polarization in aqueous base.

In the present study we examine and evaluate the electro-catalytic behavior of iron oxide Fe2O3 anode materials for the OER in aqueous base. These materials are prepared via the thermal decomposition of a simple nitrate precursor salt and are significantly inexpensive in comparison to platinum group metals [5]. Fe2O3 exhibits reasonable electro-catalytic activity in alkaline environment for water oxidation catalysis, but is unstable and need the presence of surfactants. [6,7] Typically the precursor solution was prepared by adding a defined mass of Fe(III) nitrate (of defined purity) to a known volume of solvent, either butanol or to a surfactant/butanol solution[7]. The latter was painted onto a Ti wire electrode, dried briefly to evaporate any excess solvent, and then annealed in air at 425°C for 10 minutes. After cooling, the latter painting/annealing process was repeated four further times, followed by a final firing in air for 3 hours at 425°C. Fe2O3 anodes are also of interest in photo-electrochemical systems [8] and consequently an analysis of the electrochemical behavior of Fe2O3 is of considerable fundamental interest.

The electrocatalytic behavior of Fe2O3 films coated on Ti support surfaces in the absence and presence of surfactant were examined via cyclic voltammetry and Tafel plot analysis (fig.1), for the morphology via SEM (fig.2) and for the stability via polarization. It is clear from fig.1 that the surfactant influences the redox and OER behavior of the metal oxide coated Ti electrodes. The precursor salt purity was found to affect the electrochemistry. We have also examined the turnover frequency (TOF) as a function of the surfactant nature as outlined in table 1. The TOF parameter are quite low for oxide coated electrodes, around 10-3s-1.

During this study we have noted  that some parameters such as TOF and electrochemical reversibility of Fe2+/3+ surface redox transformation  manifested as peak separation value DE do not vary with nature of surfactant solution , but the use of surfactant has a major effect on the reaction order with a corresponding mechanistic implication.

This publication has emanated from research conducted with the financial support of Science Foundation Ireland (SFI) under Grant Number SFI/12/RC/2278. 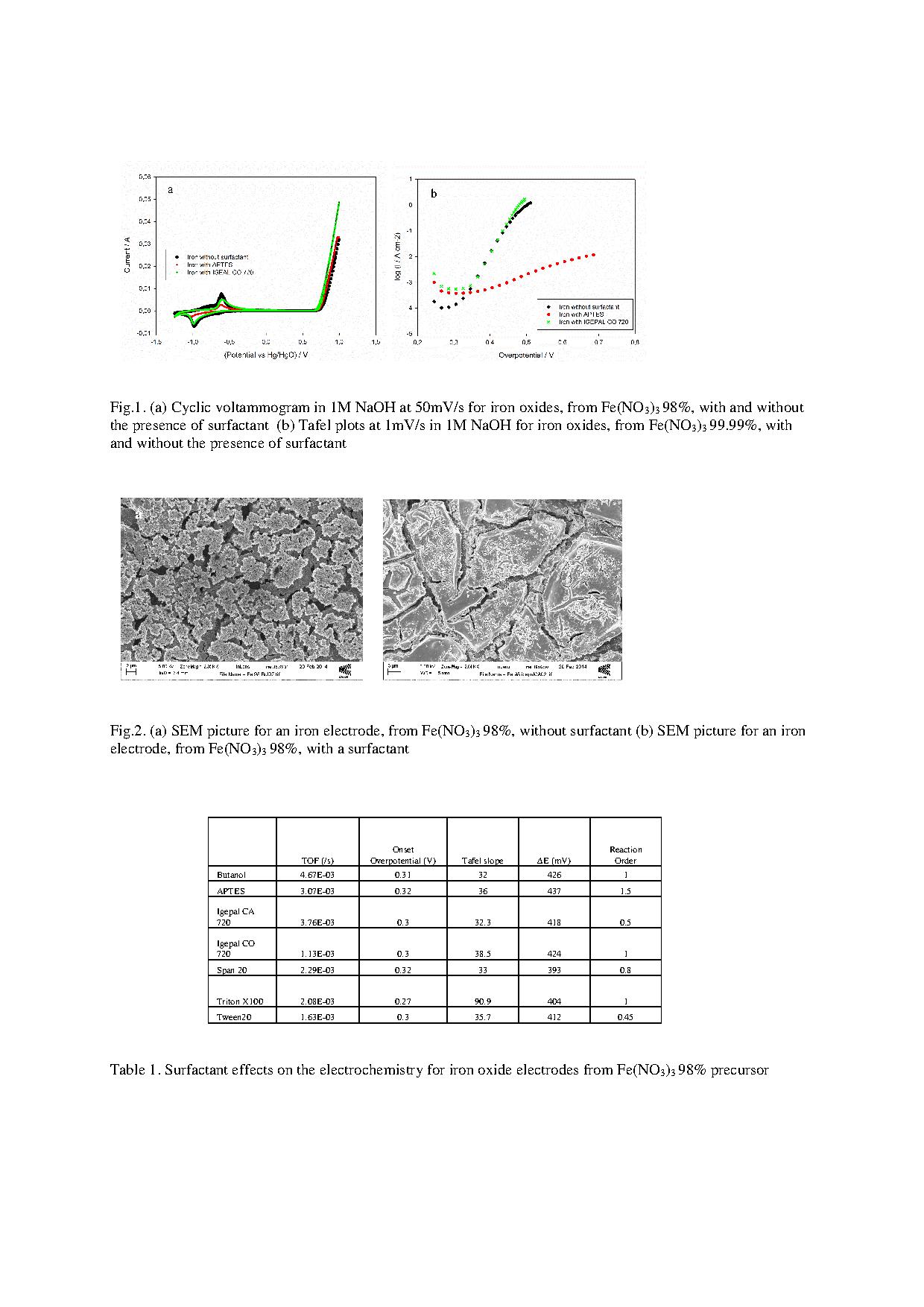