Expo Center, 1st Floor, Center and Right Foyers (Moon Palace Resort)
M. P. Browne (Trinity College, Dublin), R. J. Cullen, P. E. Colavita, and M. E. G. Lyons (Trinity College Dublin)
Alkaline water electrolysis has been proposed as an environmentally inoffensive route to the production of the large volumes of hydrogen gas required by a possible hydrogen economy [1-5]. In practice, the efficiency of water electrolysis is limited by the large anodic over-potential of the oxygen evolution reaction (OER) [5]. Over the past thirty years, considerable research effort has been devoted to the design, synthesis and characterization of OER anode materials, with the aim of achieving useful rates of active oxygen evolution at the lowest possible over-potential, in order to optimize the overall electrolysis process. Currently, the optimal OER anode materials are Ruthenium and Iridium oxides, since these oxides exhibit the lowest overpotentials for the OER at practical current densities [6]. However, the high cost of these materials compared to other metals and their poor long term stability in alkaline solution renders their widespread commercial utilisation uneconomical [7]. For these reasons, the oxides of the first row transition metals (e.g. manganese, iron, cobalt and nickel) offer a compromise solution. Even though they are not as electrocatalytically active, their relatively low cost and long term corrosion resistance in alkaline solution makes them attractive OER anode materials [7-11].

In the present work, we focus on the redox properties and electrocatalytic behaviour with respect to anodic oxygen evolution of manganese and ruthenium oxide electrodes prepared at different molar ratios in aqueous alkaline solution. These films can be prepared simply via thermal decomposition of a metal salt [12]. The structure and morphology of the thermally decomposed oxide materials are examined using thin film XRD, high resolution SEM and FTIR.

The redox behavior of the resulting oxide films is investigated as a function of molar ratio and annealing temperature using cyclic voltammetry. The kinetics of the OER at these films has been studied using a range of electrochemical techniques including steady-state polarization and open circuit potential decay curves. In particular, Tafel slopes and reaction orders with respect to hydroxide ion activity are determined. Interestingly, the electrochemical performance for the films is strongly dependent on the molar ratio used, as evident from figure attached. Based on the available kinetic data, a reaction mechanism utilizing the active surfaquo group concept, is proposed. Turnover Frequency numbers are also obtained.

This publication has emanated in part from research conducted with the financial support of Science Foundation Ireland (SFI) under Grant Number SFI/10/IN.1/I2969. 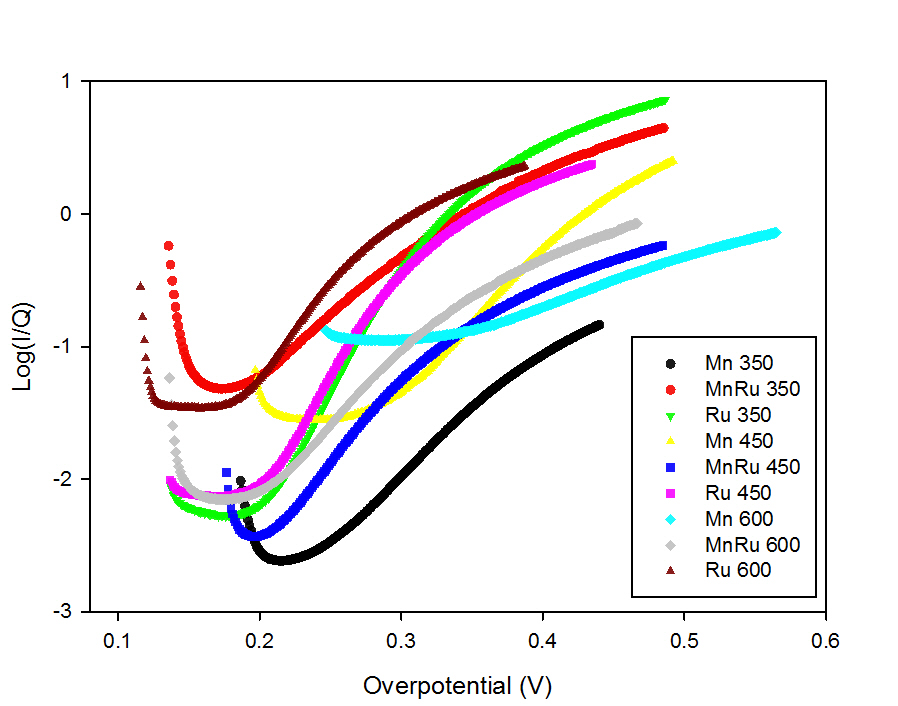