Sunrise, 2nd Floor, Star Ballroom 8 (Moon Palace Resort)
S. Stariha, A. Serov, B. Halevi (University of New Mexico), and P. Atanassov (University of New Mexico, Center for Emerging Energy Technologies)
As Proton Exchange Membrane Fuel Cells (PEMFCs) become a more viable option for clean energy production, cost is a major concern. Currently platinum contributes to over 40% of the total cost of a PEMFC.1 Because of this; there has been a huge push to develop non-platinum group metal (non-PGM) catalysts. One rapidly developing class of non-PGM catalysts for oxygen reduction reaction (ORR) are nano-materials based on transition metal-carbon-nitrogen networks (M-N-C).2 These materials include Fe salt and N-containing amines or charge transfer organic salts.

In order for these non-PGM catalysts to achieve their highest catalytic activity they must have well-developed pore structure and very high surface area.  For more than a decade The University of New Mexico has been developing an original synthesis method for these non-PGM catalysts call the Sacrificial Support Method (SSM). This method produces catalysts with open-frame morphologies at the meso-scale. SSM is based on templating of silica particles. After pyrolysis the silica support is etched away leaving self-supported M-N-C catalyst with tailored mesoporosity.3-7By using different silicas as the support high surface area can be achieved and pore sizes and pore size distribution can be tailored over a range of 10-100nm

The most realistic method of testing overall catalytic performance of non-PGM catalysts is Membrane Electrode Assembly (MEA) testing. This type of testing allows the catalyst to be tested in a fuel cell at DOE recommended conditions.  One of the biggest concerns during MEA testing, in general, is the effect of the complex interplay between ionomer content and the amount of water within the cell on cell performance.8-10 SSM-derived non-PGM catalysts have true internal pores and can be made with tailored pore sizes and pore size distribution, as evident in SEM and TEM images. Therefore the effect of ionomer content on performance under different humidity and pressure conditions can be studied and optimized. The effect of ionomer content is illustrated in the sample IV curve. While the kinetic performance improves with ionomer content, likely due to better ionic transport and conductivity, transport at higher ionomer content is hindered. 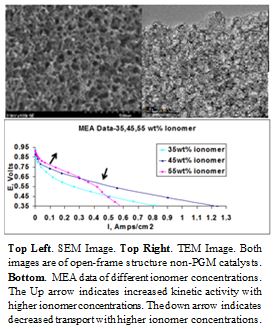