The SSM is based on mixing metal precursors (iron nitrate) and nitrogen-carbon precursors (amonoanipyrine, polyethyleneimine etc) with fumed silica Cab-O-Sil® (surface areas 90-380 m-2 g-1). The composite materials were thermally treated at T>800°C in inert (N2), reductive (H2) or reactive atmosphere (NH3).  After heat treatment the fumed silica was removed by etching in HF or KOH solution, and washed appropriately. The catalysts were comprehensively characterized by BET, SEM, TEM, and XPS. Catalytic activity for oxygen reduction was measured in acid media using the RRDE method.

Figure 1A shows that after 4 hours of ball-milling, the mixture of near color-less precursors changed color to dark brown, indicating the chemical reaction.

It was shown that mechanochemical, SSM synthesis is scalable, and 100g batches were successfully prepared at Pajarito Powder Company, LLC.

Analysis of materials morphology from SEM images reveals that Fe-DiAminoantipyrine (Fe-DAAPyr) catalysts in general possesses highly developed porous structure with BET surface area ~700 m2 g-1 (Fig. 1B). It should be stressed that in contrast to conventional synthetic methods, the SSM does not require the use of carbon supports and successfully produces a 3D porous open-frame structure. The catalytic material formed during the thermal decomposition of Fe-DAAPyr composite consists of substantial amounts of carbon derived from organic part of precursor only. Elimination of inactive artificially added carbon from synthesis results in the increase of the density of active sites.

Figure 1. A) Image of mechanochemical synthesis, B) SEM image of Fe-DAAPyr and C) RRDE data for Fe-DAAPyr in 0.5M H2SO4

Electrochemical and mechanistic performance was evaluated in both alkaline and acidic media by RRDE method (Figure 1C). It was found that material is highly active towards oxygen reduction with E1/2close to 0.78V.

In summary, systematic studies of influence of pyrolysis gas on ORR activity revealed that most active catalyst in acid media was created in the reductive atmosphere, while the most active catalyst for alkaline media was created in a reactive atmosphere. Time-temperature trajectories were optimized for all Fe-DAAPyr samples. Mechanistic RRDE studies have shown differences in reaction mechanisms in alkaline and acidic media. It was shown for first time that oxygen reduction activity in acid depends not only on the number of active centers, such as pyridinic N and Fe-Nx, but also on the number of defects. This supports the hypothesis of dual site (bi-functional) mechanism of ORR in acid media for M-N-C catalysts. The main sites responsible for hydrogen peroxide generation in acidic media were identified as pyrrolic and quaternary nitrogen, while the main sites responsible for hydrogen peroxide reduction to water in acidic media are pyridinic N and N coordinated to Fe. 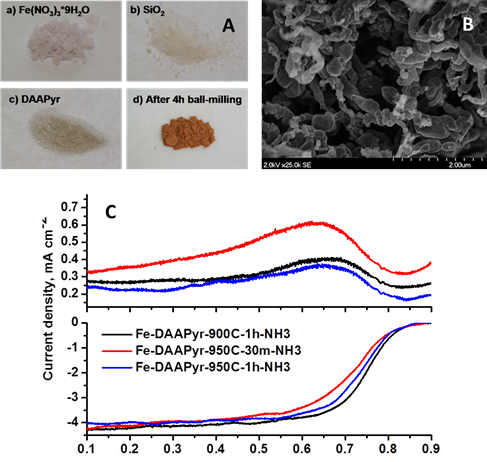