Development and optimization of non-PGM electrocatalysts consisting of a MNC framework is hindered by the complex nature of the materials, a partial understanding of the reaction mechanisms and precise chemistry of the active site or sites. The lack of this knowledge hinders the rational design of performance optimization strategies. There are two main hypotheses, one claiming that nitrogen functionalities on carbon-based support are directly responsible for their ORR activity and the second suggesting that nitrogen groups serve as the coordinating environment for metal where the ORR happens.  Candidate structures participating in ORR consist of multitudes of nitrogen defect motifs in the carbon matrix of different degrees of graphitization with metal incorporated as metal particles as well as those linked to nitrogen defects in a variety of possible architectures.

In all of studies used to derive the hypothesis of an active site or sites, the chemical structure of active sites is suggested through correlations between activity as measured either as half-way potential, E1/2, or current at a certain voltage, i.e. I at 0.8 V, and concentration of certain species as determined by spectroscopic method such as XPS.  The cross-comparison between different reports is complicated due to the fact that different electrochemical testing protocols, as well as, different metrics of activity are used.  The direct correlation between spectroscopic identifications is also complicated because different acquisition and data processing parameters are used. Besides cross-laboratory study published in 2009 (2), there is no systematic study comparing performance and structure of electrocatalysts obtained from different precursors at a variety of compositions which are tested electrochemically using the same fixed protocol and analyzed spectroscopically using the same collection and data processing procedure.

In this report, we describe the data from more than 40 electrocatalysts containing metal and 8 without metal from three families of precursors, such as polymer-based, macrocycles and small organic molecules. For each of the precursors, several electrocatalysts were synthesized using the same sacrificial support method introduced by Serov (3-5), at different temperatures of pyrolysis, ratio between the precursor and iron salt and two types of leaching the support, KOH or HF. Each of the electrocatalysts was electrochemically tested using exactly the same RDE protocol and analyzed structurally by XPS for deriving structure-to-property relationships for identification of active sites.

Through direct comprehensive structure-to-performance correlations, we have derived possible active sites participating in possible reaction pathway of ORR. Figure 1 shows correlations between activity and different types of nitrogen as detected by XPS.  There is a correlation between amounts of pyridinic nitrogen and Fe-Nx centers and activity. Pyrrolic nitrogen catalyzes the 1st step of O2reduction to hydrogen peroxide. Ratio of pyridinic to pyrrolic nitrogens seems to be a very reliable indicator of electrocatalytic activity. We will discuss these correlations in terms of mechanism of ORR in more details. 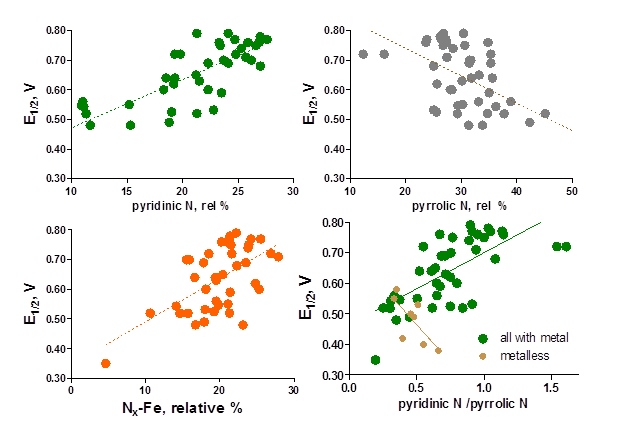