Expo Center, 1st Floor, Universal 10 (Moon Palace Resort)
Y. T. Chen (Institute of NanoEngineering and MicroSystems), C. H. Chu, K. C. Fang, C. P. Hsu, Y. W. Kang, J. Y. Fang, and Y. L. Wang (National Tsing Hua University)
Paper is an important material in our daily lives. Paper is cheap, environmentally friendly, light, flexible and widespread all over the world. Paper-based sensors are attractive because they are cheap, portable, accessible everywhere, and easily destroyed after being used. Paper-based sensors have been widely used in food safety control, clinical test, and environmental detection. The fiber structure in paper, which can act like a tunnel for microfluidic liquid transport, plays an important role in paper-based sensors by providing a platform for chemical reaction of analytes. However, conventional paper-based biosensors, which usually involve colorimetry, has the limitation in sensitivity and detection limit. Besides, the quantitative analysis of optical signals usually requires expensive optical detection system. In sharp contrast, most electronic sensors can be fabricated in very low cost and display with a simple device. In our study, we present a novel idea, which turns regular paper into conductive by combining paper and conducting polymer together. By integrating this conducting paper with different sensor technologies, various sensors can be achieved with high sensitivity and accuracy, which can be attributed to the great biocompatibility of the conducting paper. Only small amount of sample is required for testing with these sensors. Because of the simple structural design and fabrication, the conducting paper can be fabricated as a cheap, efficient, and portable electronic biosensor.

Previous research has shown the HRP-modified n-alkylated polyaniline (PANI) can detect hydrogen peroxide in buffer solution with a very high sensitivity, ultra-low detection limit, and very short response time. During fabrication, the PANI thin film may sometime suffer from cracks after baking the PANI layer on the silicon nitride substrate due to different thermal expansion coefficients between PANI and silicon nitride. By using a filter paper as the substitute for hard substrate, the mechanical stress of PANI after baking can be largely reduced. Figure 1 shows the schematic of the conducting paper. Propane sultone was doped in PANI. The PANI solution was then dropped on the filter paper and silver electrode is then coated on the back of the paper to contact with the PANI, extending to the front side, making it easy for probing. The current was measured from 0-1V. Figure 2 shows the current-voltage characteristics of the conducting paper. Figure 3(a) shows that the PANI layer is tightly merged with the filter paper Figure 3(b) shows the surface morphology of PANI on the paper.

In summary, the conducting paper made of PANi can not only achieve electronic paper-based devices, but can also realized electronic paper-based biosensors which can provide better sensitivity and lower cost, compared to the conventional paper-based sensors. Combining it with different technologies and enzymes, it can be used to detect several kinds of analytes. The portability and flexibility of conducting paper also make it more convenient to use. Because the fabrication process is quite simple and cheap, it can be widely promoted commercially in the future. 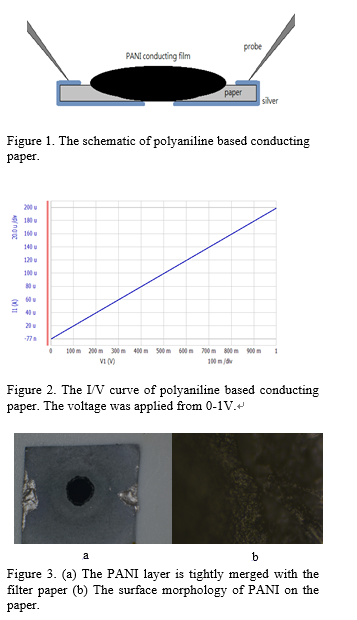