Water is widely regarded as having a detrimental effect on cell performance so Li-ion battery electrolyte normally has a water content below 50 ppm (1). This stringent water content specification results in increasing manufacturing cost.  Burns et al. found that prismatic cells with intentionally added water function well and, in fact, sometimes better than cells without added water (2, 3). However, the added water caused cell swelling. In this study, pouch cells were been chosen to study gas evolution from intentionally added water.

Figure 1 shows the gas volume evolved during formation as a function of the amount of added water. The slope of the gas volume versus water content curve for cells without VC is roughly the same as that for cells with VC. This may suggest that the gas generation mechanism due to added water is the same whether the cells contain VC or not.  VC has been shown to limit gas generation in cells without water (4) by presumably changing the distribution of products of electrolyte reduction from gases to liquids or polymers.

Figure 2 shows gas evolution versus time for cells with and without VC in the presence of added water. It shows that the gas volume gradually increases during the two-step potential hold at 1.5 V and 1.9 V where no electrolyte reduction or oxidation occur. After the two-step potential hold, the gas volume from added water in both electrolytes roughly match the theoretical calculation that one mole of water produces one mole of hydrogen. This may suggest that added water first reacts with LiPF6to produce HF and then the HF reacts with lithium and produces hydrogen.

The above results show that more gas is generated when more water is added to the electrolytes. At both 1.5 V and 1.9 V potential holds, water, or HF derived from water, can react with lithiated graphite and can be eliminated, which may be the reason why added water does not have a detrimental effect on cell performance as shown in references 2 and 3. 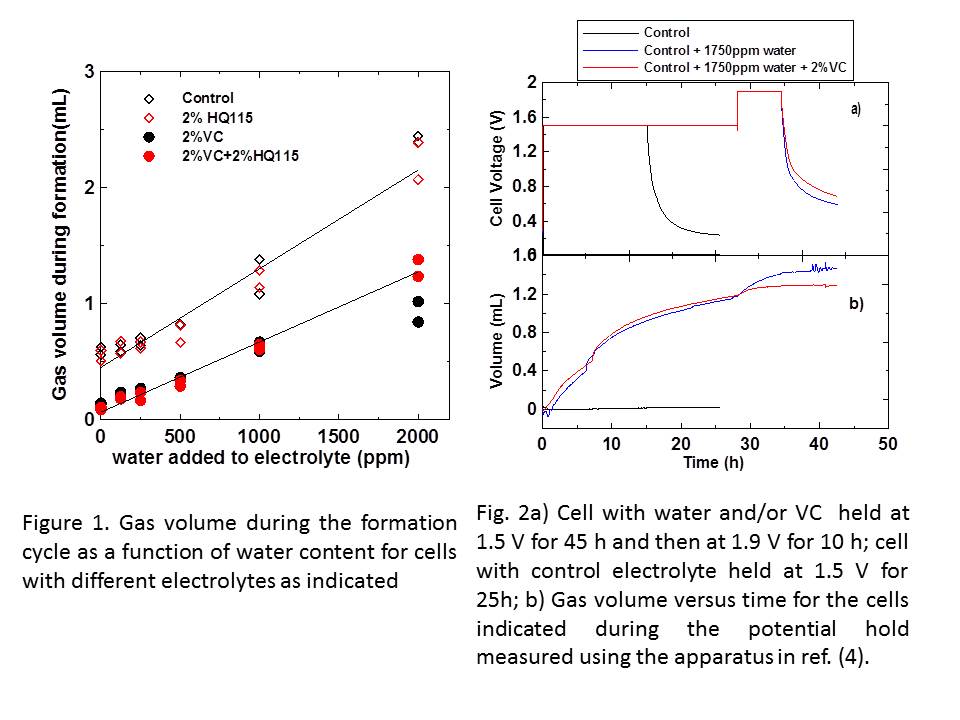