62
Is There Room for Ionic Liquids in the Development of Mg Batteries?

Batteries with pure Mg metal anodes have been noted as being potential post Li-ion technologies for the following reasons:

-Mg is cheaper than Li

-Mg is a safer material than Li

Despite the clear motivation for assembling Mg batteries, their shortfall to date has been in large part due to the fact that conventional Mg electrolytes are simply not compatible with reversible Mg electrodeposition and dissolution.

Families of Mg electrolytes known to give reversible deposition and dissolution of Mg include RMgX, Mg(BR4)2, Rm,,(RO)mMgX2-m + AX3-nR’n (A=Al,B; X=F,Cl,Br; R=alkyl or aryl group). Unfortunately, these materials have not found commercial success primarily due to issues with one or more of the following: low anodic stability, low conductivity, low cycling efficiency, corrosiveness, difficulty with production on a large scale, high nucleophilicity, and or lack of compatible cathode materials. The reader is referred to the literature to understand specific drawbacks for each species.1,2

In recent years, ionic liquids have generated a lot of excitement in several branches of science, one of them being energy storage. To date, use of ionic liquid media for Mg electrochemistry has been met with very limited success. There have been claims of reversible Mg deposition and dissolution using conventional Mg salts in RTILs but not without considerable subsequent criticism.3,4It may be that RTILs simply cannot provide an appropriate environment, however, we feel as though they may be overlooked and are more compatible than previously suggested. The obvious benefits from using RTILs in batteries are the following general physical properties:

The first two characteristics allow us to create extremely dry and inert environments by performing electrochemistry under vacuum as well as high temperatures. In such conditions (0.4mTorr, 100°C) we show moderate stripping behavior, not observed under normal inert gas atmospheres (fig 1 black curve). Furthermore, we believe there are interesting lessons to be learned from work being done with Li and Zn batteries using RTIL solvents. Specifically, double layer structures and solvation environments behave much differently in RTILs than in conventional solvents and have been shown to drastically alter the electrochemical response. For instance, the voltammograms in figure 1 with Zn and Mg salts show unusual cathodic current dips possibly due to a compact ion double layer changing as the potential is swept.

We will here present the challenges faced with using Mg electrolytes in RTILs and the possible strategies for using them to create an environment capable of providing facile, reversible Mg/Mg2+electrochemistry. 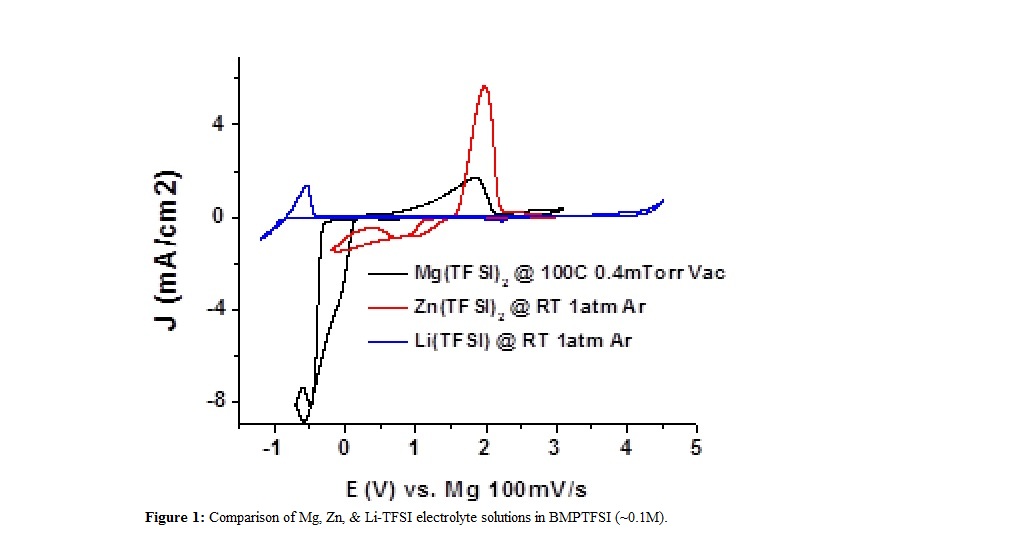