Metal air batteries have received increased attention in recent years as a potential replacement technology1. Metal air batteries utilize oxygen from the air as an input to the positive electrode; this significantly limits the size and weight of the cell. Among the potential candidates for use in these batteries zinc stands out due to its all-aqueous design and low cost with acceptable energy density1.

The use of a polymer electrolyte membrane in a zinc air cell would reduce the amount of liquid electrolyte equired, increasing the energy density. Zn-air batteries may also benefit from the use of an exchange membrane by diminishing zinc crossover and carbonate precipitation.

In this work membranes were synthesized using a poly(phenylene oxide) (PPO) based backbone structure. PPO was chosen because it is known to be relatively stable to basic environments2 and has been well studied as an anion exchange membrane for fuel cells3. Anion exchange membranes were crafted by functionalizing brominated PPO with quaternary ammonium and imidazolium moieties. Both cross-linked and uncross-linked membranes were investigated.  In this contribution, we will report primarily on the detailed behavior of PPO membranes modified with benzyl trimethyl ammonium (BTMA) cations.

An initial characterization was conducted on each membrane in order characterize the physical, mechanical, chemical, and conductive properties. The physical and mechanical properties measured included glass transition temperature, tensile strength, swelling ratio, and base and water uptake in different concentrations of KOH. Chemical properties such as ion exchange capacity were measured. The conductivity of membranes saturated in hydroxide solutions and equilibrated water vapor activities was measured.

In order to characterize the degradation of the AEMs, changes in the physical, mechanical, chemical, and conductive properties mentioned above were monitored for membranes in several concentrations of potassium hydroxide solutions.  It was found that the PPO backbone slowly degraded under accelerated test conditions, though the polymer electrolytes were stable at room temperature for long periods in battery tests.  Typical data are shown in Figure 1.

As we find for most ion exchange membranes in contact with concentrated solutions of acids, bases and salts, the conductivity exhibits a maximum with increasing electrolyte bath concentration.  Note also that the conductivity of the samples degrades over a period of weeks.  Chromatographic analysis of the bathing solution were used to explore the breakdown products of the reaction.  That analysis is ongoing.

A complete set of data correlating the water, KOH and carbonate uptake of the membrane, conductivity and other properties as functions of polymer and solution compositions will be presented and discussed.  Extensive durability tests will also be described and a comparison between our methods and literature approaches to testing durability and analyzing reaction pathways will be presented.  Implications for device applications will be inferred.

The authors would like to thank ZAF Energy Systems for providing funding for this work. 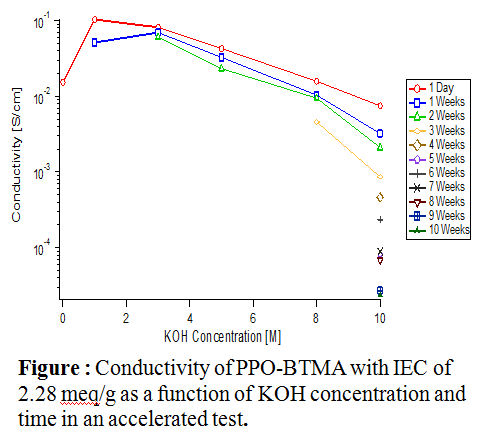