Expo Center, 1st Floor, Universal 5 (Moon Palace Resort)
B. Sarkar, B. Lee (North Carolina State University), and V. Misra (Nanosystems Engineering Research Center (NERC) for Advanced Self-Powered Systems of Integrated Sensors and Technologies (ASSIST))
Resistive memory offers many favorable properties such as simple fabrication, higher retention, and excellent endurance for future non-volatile memory applications [1]. However, some of the physical mechanisms of these memories are not well understood, one of such phenomenon is oxygen vacancy generation which leads to the creation of the filament [2]. Filament formation process has been studied extensively for single layer dielectrics [2-4], but very few studies on filament formation in bilayer dielectric has been conducted so far. Previously, it has been reported that addition of Al2O3 into HfO2 RRAM provides numerous advantages [5], one critical advantage being reduction in the forming voltage [6]. In this experiment, we studied the vacancy generation and forming properties of single layer HfO2 and Al2O3/HfO2 bilayer dielectric RRAM.

Metal-insulator-metal (MIM) capacitors with area of 100 µm x 100 µm were fabricated with either HfO2, or bilayer Al2O3/HfO2 as insulator. Tungsten was chosen as electrodes so that interfacial oxide growth can be prevented. Fig. 1 shows the forming characteristics of 5.3 nm HfO2 dielectric and 5.3 nm HfO2 + 1.1 nm Al2O3 dielectric, equivalent electric field is calculated as voltage per EOT. A gradual rise in leakage current leading to breakdown at ~5.5V was observed in only HfO2, whereas a two-step rise in leakage current was observed in Al2O3/HfO2. A fast rise was observed up to ~2V, followed by a gradual rise leading to breakdown at ~5.1V. Fig. 2 shows the forming voltage with single HfO2 and bilayer HfO2/Al2O3 dielectrics. Inset in Fig. 2 shows reset characteristics of single layer HfO2 and bilayer dielectric. It was observed that bilayer dielectric not only provides large Ion/Ioff ratio due to the incorporation of Al2O3 layer but also offers lower forming voltage. Forming voltage uniformity is also better in bilayer dielectric as shown in Fig. 2. All these observations make Al2O3/HfO2 bilayer dielectric a superior candidate over single layer HfO2for future RRAM applications. 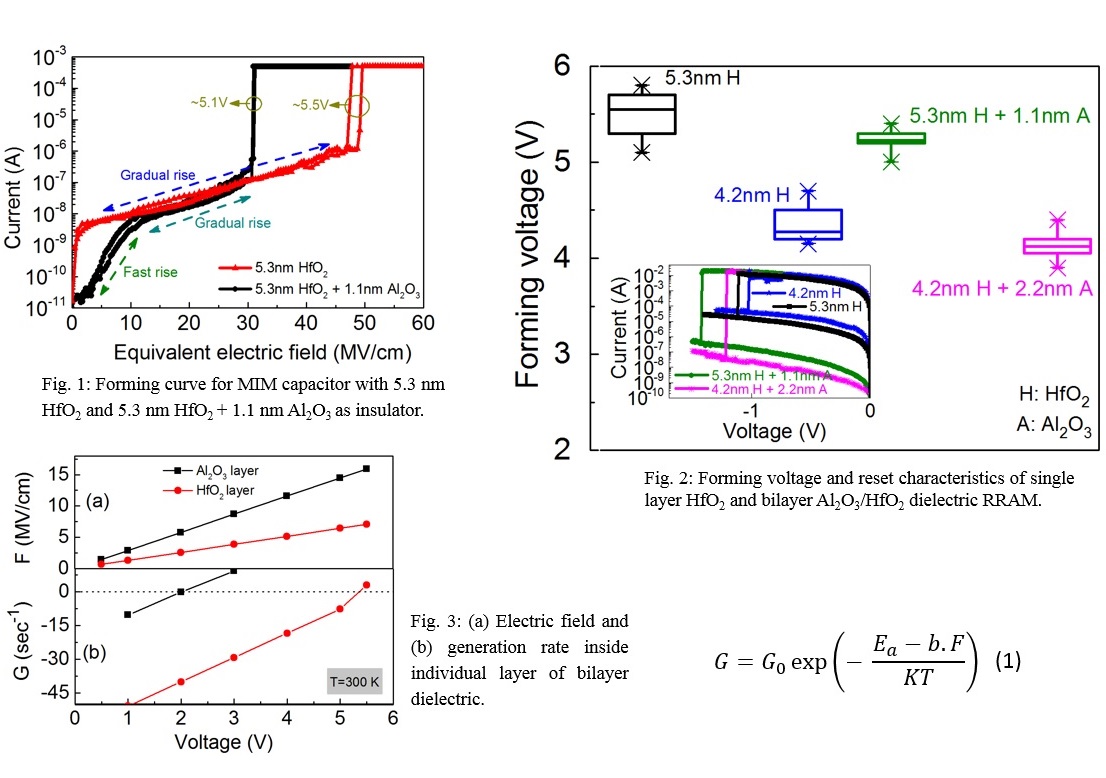