Expo Center, 1st Floor, Universal 11 (Moon Palace Resort)
O. O. Capraz, P. Shrotriya, and K. Hebert (Iowa State University)
The enhancement of mechanical degradation by corrosion is the basis for damage processes such as stress corrosion cracking. Corrosion-induced degradation has been attributed to a wide variety of mechanisms.1 Here we show that high-resolution in situ stress measurements during Al corrosion reveal corrosion-induced tensile stress generation, leading to surface plasticity. This finding is evidence that corrosion can directly bring about plasticity, and may be relevant to mechanisms of corrosion-induced degradation. The present measurements are possible because of the unprecedented curvature resolution achievable through the present phase-shifting curvature interferometry method, which permit the monitoring of stress during extended periods of corrosion of thick metal samples.2,3

Al samples were 1 mm thick hard 5N Al sheets or 25 mm thick 5N annealed foils bonded to Si wafers. Some sheet samples were cold worked to 35 % thickness reduction. A reflective gold film was applied to the back side of each sample, which was in contact with air while the front side was exposed to solution. Curvature changes were measured by monitoring interference between two laser beams, each of which reflected twice on the gold surface. Curvature was converted to force per sample width using the Stoney equation.2 The force per width is the integrated in-plane stress through the sample thickness. The obtainable curvature resolution of 10-3 km-1is about 10 times higher than state-of-the-art deflectometry techniques. Thus, while thin metal films on wafers are typically employed in the latter experiments, stress in bulk samples can be measured with curvature interferometry.

Fig. 1 shows that the Al samples exhibited large rates of alkaline corrosion-induced tensile stress increase, qualitatively similar to those measured previously on evaporated thin films.4At the outset of dissolution, force increased approximately linearly with time until a plateau was reached at 10-20 min. The plateau force was highest for the cold-worked sheet and smallest for the annealed foil. The yield stress of these samples was determined from Vickers hardness measurements, and found to scale linearly with the plateau stress (inset). Therefore, the plateaus in Fig. 1 apparently correspond to the onset of plastic flow. The preceding linear increase of force may correspond to the buildup of elastic stress to the yield stress. Similar force transients were observed in 1 M NaOH using Al samples with increased impurity content, and with 5N Al samples in solutions of lower pH. The plateau stress increased with impurity concentration and pH (i. e. metal dissolution rate).

Tensile stress buildup during corrosion was modeled in terms of diffusion of Al atoms from near-surface dislocations to the metal-oxide interface. The force evolution was predicted based on the requirement of zero net strain resulting from additive contributions from elastic strain, plastic strain associated with power-law creep and diffusion-induced strain. Fitting the model to the force transients yielded values of the Al diffusivity. The elevated values of the fit diffusivity suggested significant rates of metal vacancy injection during the corrosion process.

This work was supported by the National Science Foundation through NSF-CMMI-100748.

Figure 1. Force per width evolution during dissolution of 5N Al samples in aqueous 1 M NaOH solutions at room temperature. In the inset, the force per width at the plateau is plotted vs. the sample yield stress. 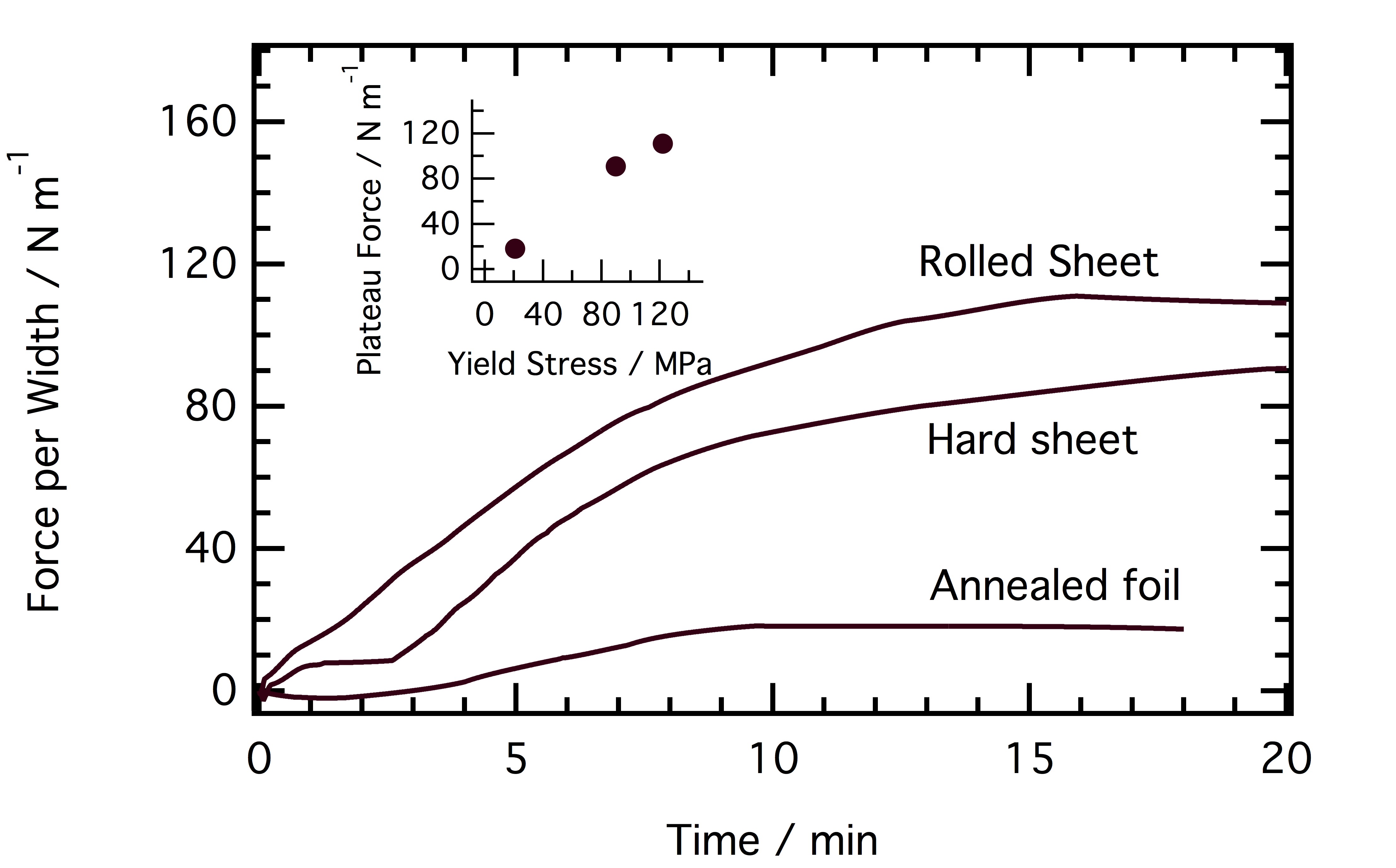