Sunrise, 2nd Floor, Galactic Ballroom 2 (Moon Palace Resort)
D. McNulty, D. N. Buckley (University of Limerick), and C. O'Dwyer (University College Cork)
Over the last decade the technological advancements which have led to products such as smartphones, tablet computers and electric vehicles have been outstanding. Currently, battery technology is just about keeping up with consumer demands. In order to prevent lithium ion batteries from impeding future technological advancements every aspect of lithium ion batteries must be examined to determine how future improvements can be made. There is a tremendous amount of research being done into possible cathode materials to replace the most commonly currently used cobalt oxides [1, 2].

Vanadium oxide nanotubes (VONTs) were first reported in 1998 by Spahr et al. [3] and since then there has been a great deal of research into how to fully optimise VONTs as a cathode material for lithium ion batteries [4, 5]. Typically VONTs are prepared by hydrothermal treatment of a vanadium oxide precursor mixed with a primary amine [6]. The presence of amine molecules are crucial to the formation of the VONTs as they maintain the vanadium oxide layers which scroll to form the nanotube structure [7]. While the amines are vital in the synthesis of the VONTs they are unfortunately detrimental in their electrochemical performance. It has been proposed that amine molecules occupy the majority of the possible lithium intercalation sites within the VONTs and hence are responsible for the poor cycling performance which has been reported for as-synthesised VONTs [8].

In this work we investigate two alternative methods to remove amine molecules from the as-synthesised VONTs, using the nanotube structure as a ‘backbone’ or ‘starting structure’ for other polymorphs. The first method consists of annealing as-synthesised VONTs to high temperatures (≈ 600 oC) in an effort to evaporate the amines out of the vanadium oxide structure. This method results in polycrystalline vanadium oxide nanorods (poly-NRs). The second method is a two-step process. First, the as-synthesised VONTs undergo an ion exchange treatment, partially substituting amine molecules with Na+ ions to form Na-VONTs and secondly, the resulting Na-VONTs are also annealed to 600 oC.

We confirm the removal of amine molecules by monitoring the inorganic and organic phase changes and decomposition, respectively, using IR spectroscopy, electron microscopy, X-ray diffraction and X-ray photoelectron spectroscopy analyses. Through detailed electrochemical investigations we compare the electrochemical performance of as-synthesised VONTs, poly-NRs, Na-VONTs and Na-VONTs after thermal treatment. We confirm that the heavy functionalization of VONTs by amine molecules can impede the intercalation of lithium ions, and that their removal results in a significant improvement in electrochemical characteristics. We will show that poly-NRs exhibit the most promising results for practical use as a cathode material. High rate capability tests demonstrate their stability at high charging rates (1C) and long term cycle life testing indicates a high level of capacity retention over 500 cycles.

This publication has emanated from research conducted with the financial support of Science Foundation of Ireland under Grant No: 06/CP/E007. 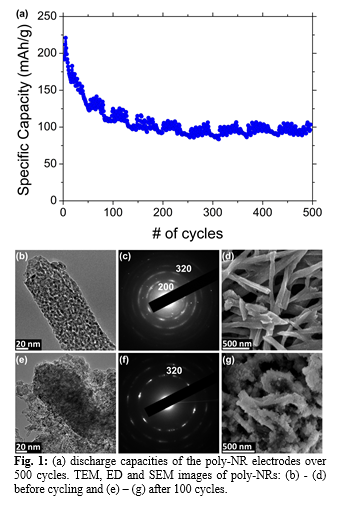