Expo Center, 1st Floor, Universal 5 (Moon Palace Resort)
N. Uchida (National Institute for Advanced Industrial Science and Technology (AIST)), Y. Ohishi, Y. Miyazaki, K. Kurosaki, S. Yamanaka (Division of Sustainable Energy and Environmental Engineering, Graduate School of Engineering, Osaka University), and T. Tada (Nanoelectronics Research Institute, National Institute of Advanced Industrial Science and Technology)
To improve the poor thermoelectric performance of Si, reduction of the high thermal conductivity k (~142 Wm–1K–1) is essential, and one of the effective methods to reduce the k is making Si nanostructures such as Si nanocrystals (NCs) [1, 2] and nanowires[3], where the k is dramatically reduced by enhancement of phonon scattering at the interfaces of the nanostructures. Recently, we developed semiconducting composite films of Si and Ni silicide NCs (Si-Ni nanocomposite film) deposited on SiO2 substrates [2]with the power factor of 1.9×10-3 W/mK2 , the thermal conductivity k of 4.4 W/mK, and the dimensionless figure of merit ZT of 0.13 for the B-doped (p-type ) nanocomposite film [2], which is much higher than that of bulk Si (ZT<0.01).

In this paper, we demonstrate the further improvement of the thermoelectric performance of B doped Si-Ni nanocomposite films by growing them on silicon-on-insulator (SOI) or silicon-on-quartz (SOQ) substrates. The B doped Si-Ni nanocomposite films were synthesized from amorphous Si-Ni-B films deposited on the SOI or SOQ substrates at room temperature (RT) with Ar sputtering of the B doped Ni-Si target (Ni:Si=1:20, 2mol% B). The amorphous films were annealed at 800°C in N2gas ambient, leading to crystallization and the phase separation of the films. After this annealing , rapid annealing of 10 sec at 1200°C was carried out to activate the B atoms.

This work was partly supported by ALCA-JST. 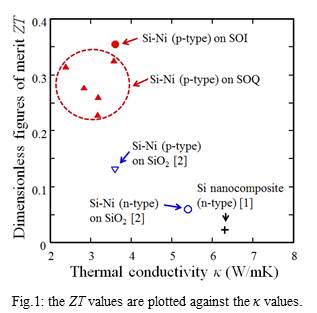