Sunrise, 2nd Floor, Galactic Ballroom 8 (Moon Palace Resort)
J. O. Jensen, D. Aili (Technical University of Denmark), M. K. Hansen (Siemens), Q. Li, N. J. Bjerrum, and E. Christensen (Technical University of Denmark)
Alkaline fuel cells and electrolyzers are attracting increasing interest. This is to a large extent due to the broad selection of catalyst materials not based on resource limited and expensive noble metals. The first fuel cells in practical use were Francis Thomas Bacon’s based on an alkaline electrolyte. The system has been quite successful with good oxygen kinetics, but the electrolyte suffers from carbonization when operated in normal CO2containing air and this has limited the application to space technology and similar niches. The alkaline electrolyzer on the other hand has been the state of art commercial choice for decades and the carbonization problem is absent since oxygen is produced, not consumed. However, the demand for high voltage efficiency has been limited and the alkaline electrolyzer has been optimized in the direction of robustness and long lifetime instead. Today it has become obvious that an energy system based on renewable energy will need conversion of a large amount of electrical energy to fuel for storage and for transport. We believe that from a materials perspective the alkaline electrolyzer has the strongest potential for meeting the manufacturing cost targets given, but voltage efficiency and rate capability must be improved significantly.

One important component with room for improvement is the electrolyte which traditionally fills a gap of up to several mm between the electrodes. The resistance can be much reduced if a thin anion conducting membrane or a porous diaphragm is used instead in direct contact with both electrodes (zero gap). In proton exchange membrane (PEM) electrolyzers proton conducting membranes like in PEM fuel cells have been very successful, but for the equivalent anion exchange membranes a similar conductivity has not yet been demonstrated; in contrast it is typically about an order of magnitude lower, which is insufficient [1].

The aromatic fluorine free polymer polybenzimidazole (PBI) has been very successful as a high temperature fuel cell membrane when doped with phosphoric acid [2] and it has been shown by Xing and Savadogo [3] that it can also be doped with potassium hydroxide and serve as electrolyte for alkaline fuel cells. See figure 1.

In this work the stability of PBI doped with aqueous KOH was studied after storage in 6 M KOH at 85 °C for up to 176 days, i.e. close to half a year [4]. The pristine polymer was supplied by Danish Power Systems ApS and solution cast from DMAc. Three different variants of the PBI were used. 1) The pristine linear PBI, 2) PBI crosslinked by dibromoparaxylene and 3) PBI thermally cured at 350°C.

Tensile strength and elastic modulus decreased somewhat during storage, but all membranes remained integral throughout the entire storage period with the exception of the linear untreated sample which disintegrated when handled after the full 176 days. A gradual weight loss was seen for all membranes but the effect was much reduced for the crosslinked and the cured pieces. The thermally cured membrane lost less that 10 mass %. Viscosity measurement on the linear PBI (the only one soluble) showed a decreasing molecular weight over time of storage. The materials were also examined by IR, NMR and TGA.

Finally, electrolysis tests were made including comparison with a commercial diaphragm material (Zirfon). The conductivity of the alkali doped PBI samples was around 0.05 S cm-2 at 85°C, while that of Zirfon was ca. 0.2 S cm-2, but since Zirfon is much thicker to ensure a low bubble point pressure the practical area specific resistances were more or less equal and the cells showed very similar polarization characteristics. 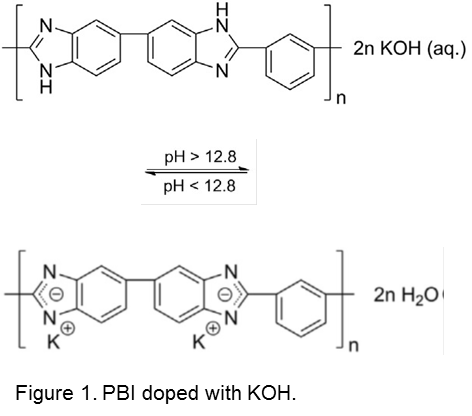