Expo Center, 1st Floor, Universal 14 (Moon Palace Resort)
K. R. Zavadil and K. L. Harrison (Sandia National Laboratories)
Creating and preserving the activity of an oxygen cathode in an aprotic organic solvent is a critical barrier that must be overcome to enable energy storage with the lithium – oxygen electrochemical couple. The nucleation and growth of solid products during the oxygen reduction reaction, like lithium peroxide and superoxide, needs to be directed away from the electrocatalyst to prevent passivation and toward sites that facilitate product nucleation and growth. These nucleation sites must also enable electron transport to ensure oxygen evolution during charging. Model cathode surfaces can be used to explore these proximity relationships between electron transfer and product growth sites in situ using electrochemical atomic force microscopy to track solid product formation.  We have developed methods for producing a variety decorated electrode substrates on which electron transfer and nucleation sites are separated and these proximity relationships can be studied as a function of the rate and extent of oxygen reduction.

The impact of isolating electron transfer sites is demonstrated in the response of highly ordered pyrolytic graphite (HOPG) to ORR in a bis(trifluoromethane) sulfonamide (LiTFSI) - tetraethylene glycol dimethyl ether (TEGDME) electrolyte (Figure 1). The step edges represent line defects with a heterogeneous rate constant many orders of magnitude greater than the adjacent terraces (R. McCreery et al., Anal Chem, 2012). Driving the ORR at relatively slow rates (ca. μA/cm2) results in initial nucleation and growth of particles along these defects with the eventual formation of large particles imbedded in a thin, continuous product film at the point of eventual electrode passivation, In contrast, a uniformly electroactive Au(111) surface exhibits the formation of a continuous thin film without significant particle formation. These results emphasize the fact that a significant amount of the peroxide and superoxide formed during ORR originate from precipitation reactions. The precipitation of lithium peroxide argues that disproportionation of the electrogenerated superoxide takes place in solution and not on the electrode surface.

The impact of creating discrete sites for solid product nucleation and growth is explored by decorating graphite with MnO2 particles. The expectation is that an oxide surface should represent a favorable site for the nucleation and growth of the peroxide and superoxide products. β-MnO2 has been shown to exhibit enhanced activity for ORR in LiTFSI:TEGDME (O. Oloniyo et. Al., J Electronic Mater, 2012). Vacuum techniques are used to decorate HOPG with β-MnO2 nanoparticles, where the relative preference for particle growth at step edges and terraces can be controlled with the use of active oxygen. Figure 1 shows an example of directing β-MnO2 growth at the step edges. Conducting ORR on this electrode, at the same current density as for the pristine HOPG surface, shows that product formation occurs as a conformal coating over the β-MnO2nanoparticles. These results indicate that it should be possible to control the location of product nucleation.

Voltammetry and chronopotentiometry show that Au(111) is considerably more active for ORR relative to either graphite step edges or β-MnO2 nanoparticles  in this LiTFSI:TEGDME electrolyte. We have combined both Au and MnO2 nanoparticles onto graphite with the Au placed at step edges and the MnO2 on the terraces to achieve electron transfer and nucleation site separation. Results from ORR rate and extent studies with these structured electrodes will be presented and discussed. 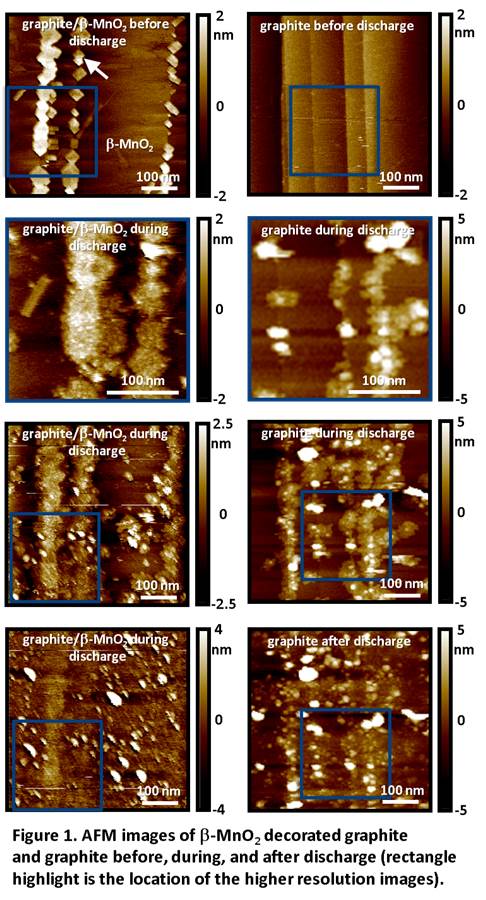