1200
Evaluation of Durability with MEAs Made by Graphitized Carbon Supports

Sunrise, 2nd Floor, Galactic Ballroom 7 (Moon Palace Resort)
A. Hayashi (Kyushu University), X. Zhao (Faculty of Engineering, Kyushu University), Y. Minamida, M. Kitamura, Z. Noda, and K. Sasaki (Kyushu University)
Polymer electrolyte fuel cells (PEFCs) are attractive energy device for our future society. Even so, improvement of durability is still desired. Especially for fuel cell vehicles (FCVs), carbon oxidation derived by the start/stop cycle becomes a problem. We have been working on surface graphitized carbon supports to increase the durability toward carbon oxidation. Up to date, durability of electrocatalyts has been improved as much as twice in the half-cell reaction just through the heat treatment of carbon supports [1]. In this study, MEAs are prepared with such electrocatalysts. Their initial performance and durability was evaluated in detail by both electrochemical and electron microscopic methods.

In this study, MEAs, whose diameter was about 8 mm, were used. For the anode, commercially available Pt/Ketjen black (TEC10E50E, TKK corp.) was in use. For the cathode, Pt deposited on Vulcan carbon or on graphitized Vulcan carbon materials, named as Pt/VC or Pt/GVC, were prepared in our lab. Here, Pt/GVC was made through the heat treatment at 1600 oC. For the electrochemical analyses, I-V characteristics were evaluated. Regarding to durability, the potential cycle tests assuming the start/stop cycle of FCVs, which suggested by Fuel Cell Commercialization of Japan (FCCJ) [2], were used. Furthermore, nanostructures of cathode layers were observed using Hitachi HF-3300.

Initial IV characteristics of MEAs with Pt/VC and Pt/GVC were almost the same. However, their durability resulted in different. MEA with Pt/GVC showed much improved durability. To understand the change in microstructures of the cathode layer, a part of cathode layer was picked up by a FIB microprobe, placed on the microgrid, and observed by SEM/STEM at the same time. As shown in Fig. 1, in case of Pt/VC cathode layer, more Pt particles were observed after the 5000 potential cycle test. Surprisingly, a lot of Pt particles existed inside carbon supports, which was clearly understood form the amount of Pt on carbon surface in the SEM image. Such embedded Pt particles were much suppressed in case of Pt/GVC cathode layer. Our new methods to study degradation process using in-situ SEM/STEM observation will be also discussed. 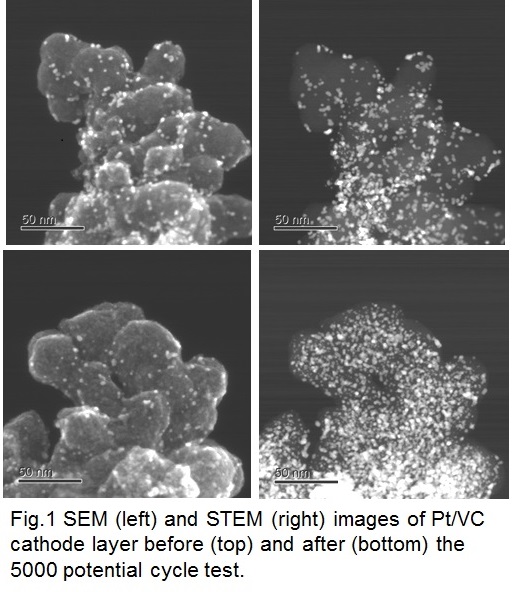