For many potential mobile robot applications, current power supply technology (such as the lithium ion battery technology) is in fact a key limiting factor due to its low energy density. Solid oxide fuel cells (SOFCs) are a promising alternative and can overcome limitations of current battery technology. This is because SOFCs can use not only hydrogen but also hydrocarbon fuels which have high energy density such as gasoline and so on. However, hydrocarbon is broken down into hydrogen and carbon at a high temperature and carbon precipitate on anodes.

Surface-polished YSZ pellets of 2 mm in thickness were used for the electrolyte. Pt cathode electrode and Pt reference electrode were prepared on the surface and side of the pellets, respectively, by firing Pt paste at 1300 oC for 1 h. Then, a commercially available CuO powder and GDC powder (CuO/GDC=55/45 (wt)) were thoroughly mixed in a vacuum using the planetary ball mill (LP-1, Ito Seisakusho Co., Ltd., 200 rpm, 24 h), and made into CuO-GDC pastes using ethyl-cellulose and organic solvent. The CuO-GDC paste was screen-printed in diameter of 8mm on the YSZ pellets and sintered at 900 oC for 1 h.

Octane and steam were supplied to the SOFC cell by bubbling carrier gas (He) at a constant rate. Octane bubbler temperature was 30 oC, and Steam/Carbon ratio (S/C) were controlled by changing the temperature of the water bubbler from 30 to 70 oC. Electrochemical property was measured over a temperature range of 800-700 oC. During the constant current generation, exhaust gas was analyzed by gas chromatography.

Figure 1 shows current-voltage (I-V) and current-power (I-P) characteristics for the cells at 750 oC. Octane-direct introduction generation is possible in SOFCs by using the Cu-GDC anode. A power generation characteristic improves gradually with the rise of S/C. For the lower S/C, the I-V curves are highly nonlinear, while the I-V curve for S/C=8.86 is essentially linear. Figure 2 shows impedance spectra for the cells with the Cu-GDC anode at 750 oC under open circuit conditions. The ohmic resistances that we associate with the electrolyte are obtained from the high-frequency intercept of the arc with the real axis, are the same and small values, while the total impedance from the low-frequency intercept in the arc with the real axis is increased with the S/C. The difference between the total impedance and electrolyte impedance is the anode electrode impedance. Therefore, the dominant factor of a power generation characteristic is anode electrode resistance. 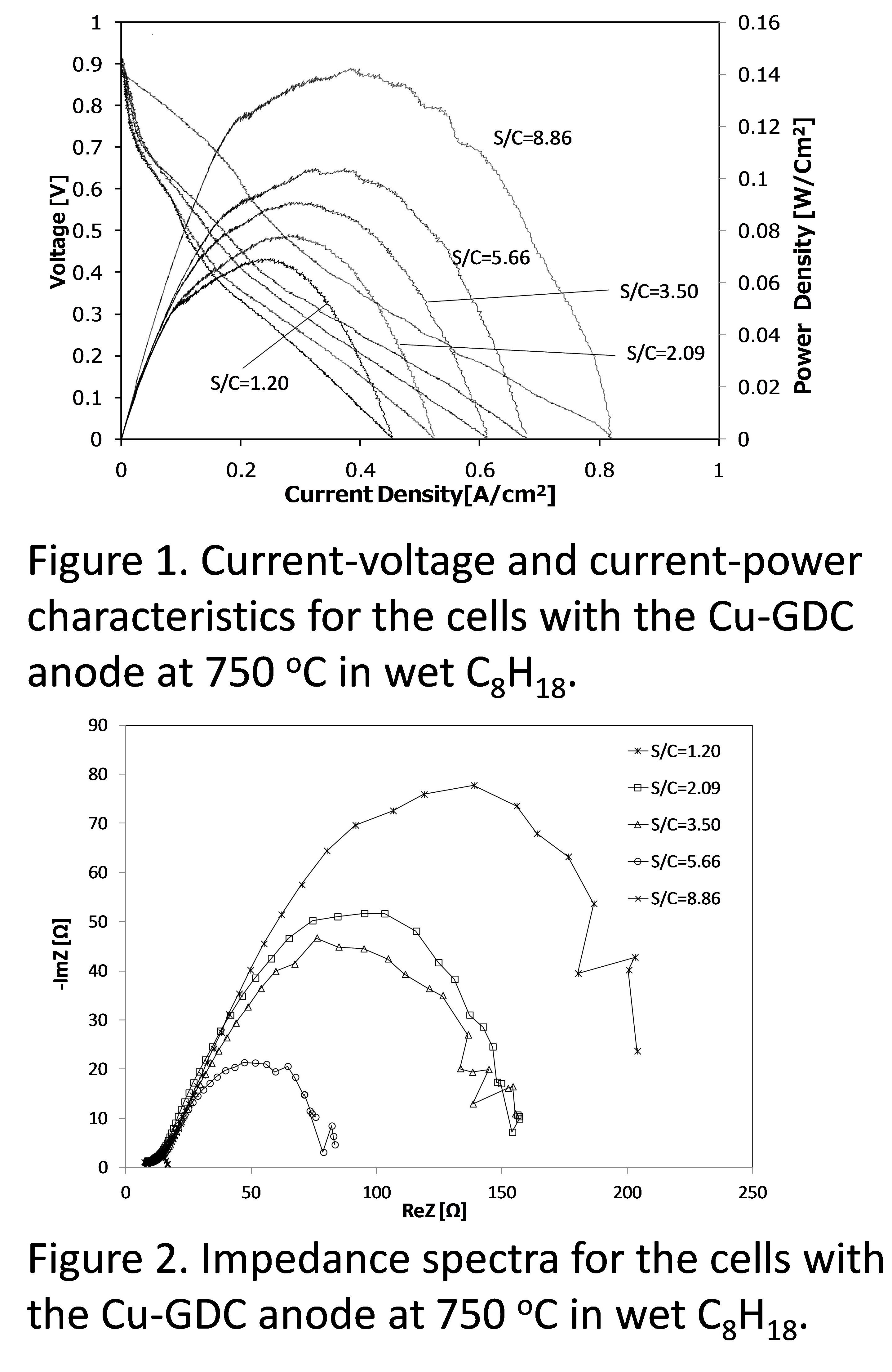