ZrP powders were prepared from zirconium oxide hydrate (ZrO2·nH2O) powders through treating with phosphoric acid by hydrothermal synthesis method. A colloidal suspension of ZrP nanosheets was obtained by exfoliation of ZrP powders induced by shaking with aqueous solution of tetrabutylammonium hydroxide. ZrP films were prepared by applying concentrated colloidal suspension of ZrP nanosheets on substrates and drying them in air. Protonic conductivities of ZrP films were measured by alternating-current impedance measurement in the frequency range from 1 MHz to 100 Hz with an applied voltage of ±100 mV.

All-solid-state thin-film electrochemical capacitors were fabricated with ruthenium oxide hydrate (RuO2·nH2O : RuO2) as both electrodes and ZrP films as electrolytes. Galvanostatic charge/discharge tests were carried out in the cell voltage range of 0 – 1 V at a constant current density of 100 mA g−1.

Fig. 2 shows the charge and discharge curves of the all-solid-state thin-film electrochemical capacitor (RuO2|ZrP-film|RuO2) measured at a constant current density of 100 mA g−1. No recognizable plateau regions are observed in either the charge or the discharge curves. The electrochemical capacitor exhibited a reversible capacity of 22 mAh g−1 at the 10th cycle. This capacity is much higher than that of many other proton conducting all-solid-state capacitors [3, 4], and is comparable to those of electrochemical capacitors assembled with liquid electrolytes. In addition, the cycle characteristic was good and coulombic efficiency was high (h = 93%), suggesting the influences of side reactions to be small. 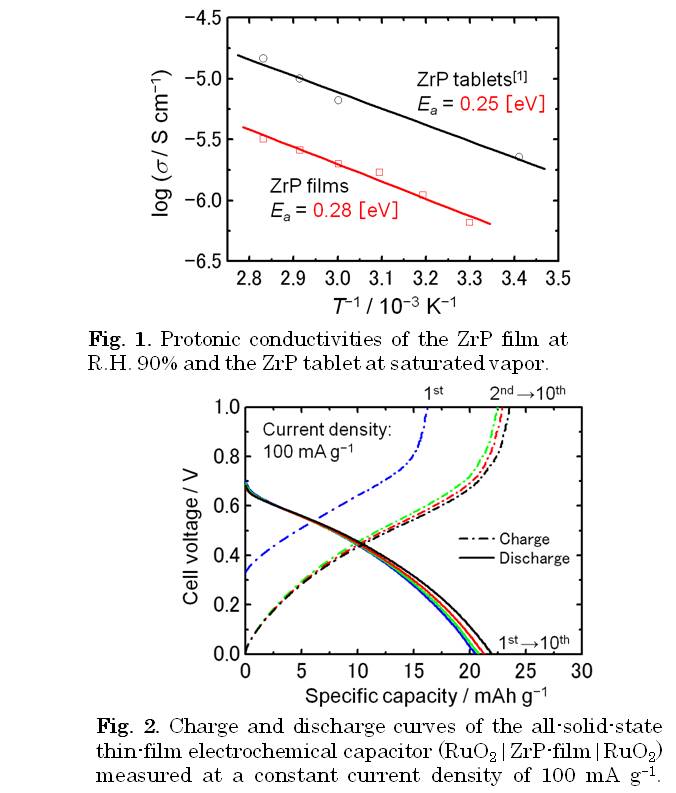