Usage of a small amount of liquid electrolyte as contact agent is expected to reduce the interfacial resistance. In such “quasi-all-solid-state” EC, nanoporous-structure materials with large capacity can be used as electrodes. In this study, quasi-all-solid-state EC were fabricated and evaluated. As a solid electrolyte, sulfonated tetrafluorethylene copolymer (Nafion®) was selected. As a cathode material, the layered ruthenium dioxide (RuO2) was selected, which has a large capacity and high power density as an electrode of an aqueous capacitor [1]. As an anode material, the nanoporous composite of anthraquinone (AQ) and activated carbon was selected, which has both a large capacity and a low redox potential as an electrode of an aqueous capacitor [2].

The composite of AQ and activated carbon (AQ/C), in which AQ (30 wt%) was supported in the micropores of activated carbon (70 wt%), was prepared following the method reported previously [2].The dispersion of the electrode materials was prepared by mixing AQ/C powders and Nafion ionomer in an ethanol solvent using a revolving/rotating mixer. The weight ratio of AQ/C to Nafion was 7:3. The AQ/C anode was prepared by casting the dispersion on a current collector and drying the solvent. RuO2 was synthesized following the method reported previously [1]. The RuO2 cathode was prepared in the same casting method. It consisted of RuO2(55 wt%), carbon black (15 wt%) and Nafion (30 wt%).

Quasi-all-solid-state capacitors, (AQ/C | Nafion | RuO2), were fabricated by sandwiching Nafion membrane between the electrodes and hot-pressing. The weight ratio of the AQ anode to the RuO2 cathode was 2:1. The capacitors were immersed in 0.5 M H2SO4and they were washed by purified water. The galvanostatic charge/discharge test for the capacitor was carried out under air atmosphere in the cell voltage range of 0–1.2 V.

The AQ/C anode showed a discharge capacity of 72 mAh (g-AQ/C)−1 by the galvanostatic charge/discharge test. A plateau was observed at about −0.2 V (vs. Ag/AgCl). Thus, the following reaction is suggested [2]:

The RuO2 cathode showed a discharge capacity of 170 mAh (g-RuO2)−1. A plateau was observed at about 0.4 V (vs. Ag/AgCl). From these results, it was estimated that the ideal capacity of the capacitor was 43 mAh (g*)−1. (The g* is the total weight of the AQ/C and RuO2 in electrodes.)

Fig. 1 shows the galvanostatic charge/discharge curves of the fabricated capacitor at a current density of 500 mA g−1. The discharge capacity was 38 mAh (g*)−1 and the coulombic efficiency was 88% at the 1st cycle. This capacity corresponds to as large as 88% of the ideal one. This large capacity suggests that most of AQ reacted with proton in the AQ/C anode. The resistance in the reaction of AQ was examined by AC impedance measurement and it was 30 W at 1 Hz, which is half of the value of the all-solid-state electrochemical capacitor using gel electrolyte and MnO2 electrodes [3].When the capacitor was not immersed in H2SO4, AQ did not react due to the large interfacial resistance. Considering these results and the fact that AQ is supported in the micropores of activated carbon [2], the H2SO4 included in the micropores of AQ/C contributed to the small resistance. The estimated energy density of the capacitor was 23 Wh kg−1. It is higher than those of other all-solid-state EC previously reported (e.g. 4.8 Wh kg−1 [3]). In addition, the capacitor kept the advantages of all-solid-state EC such as no leakage of liquid electrolyte and thinness of the device (e.g. the total thickness of electrodes and electrolyte was about 200 mm). Although improvement of a cycle characteristic is needed, a quasi-all-solid-state electrochemical capacitor with high energy density was obtained.

Fig.1 Galvanostatic charge/discharge curves of the capacitor. The g* is the total weight of the AQ/C and RuO2in electrodes. 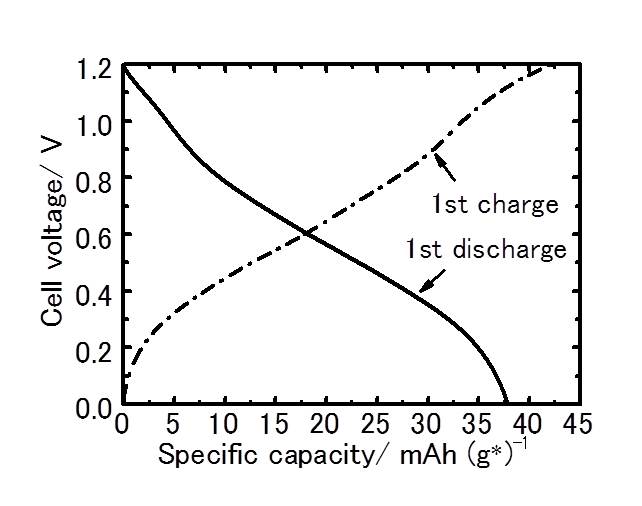