Expo Center, 1st Floor, Universal 1 (Moon Palace Resort)
G. R. Stafford, M. C. Lafouresse, and U. Bertocci (National Institute of Standards and Technology)
The electrodeposition community has been very active in the development of in situ stress measurements during electrochemical processing. The simplest and most widely used methods involve the measurement of the deflection of a flexible cathode, typically in a direction that is perpendicular to the in-plane stress generated in the film. These in situ stress measurements have been used to examine adsorbate-induced surface stress, underpotential deposition, electrochemical intercalation reactions, and bulk film deposition.

Intrinsic stress is caused by the manner in which the film grows and can arise from lattice-mismatched epitaxial growth, nuclei coalescence and grain growth during deposition, and other processes that occur during thickening of the continuous film. For example, Cu grows on Au by a Stranski–Krastanov mechanism where island coalescence is the primary source of stress generation. Figure 1 shows the average in-plane stress associated with the bulk deposition of copper from an additive-free sulfate electrolyte. The large tensile stress generated in the early stages of deposition is consistent with nuclei coalescence and subsequent grain boundary formation. As the deposit thickens, the average film stress decreases rather quickly and even becomes compressive in deposits formed at small deposition overpotentials. If deposition is interrupted in this compressive stage (Fig. 1 inset), a rapid relaxation of the stress occurs. When deposition is resumed the stress level is re-established as if the interruption had never occurred. This behavior is consistent with compressive stress generation due to the reversible diffusion of ad-atoms on the surface into grain boundaries.

Electrochemical impedance spectroscopy (EIS) is often used to separate electrochemical processes with different characteristic time constants. A sinusoidal voltage (typically of the order of a few mV) is applied to an electrochemical system and the current response is measured. The frequency of the applied voltage is varied so that different processes can be singled out at specific frequencies. Dynamic stress analysis (DSA) is analogous to EIS, however in addition to the current, the cantilever’s curvature is also measured as a function of frequency. The aim of DSA is to study the dynamics of any particular stress-generating process and link the stress to specific electrochemical and surface phenomena. We have demonstrated the technique by examining the electrocapillarity (charge-induced stress) of both Pt and Au in HClO4 electrolyte.1 In this case the figure of merit is the stress charge coefficient (ξ) which captures the fundamental surface mechanics associated with charging the electrode surface. As expected for capacitive charging, there is no frequency dependence (below the resonant frequency of the cantilever). In this paper we apply DSA to the electrodeposition of Cu, our first attempt to add a stress-generating faradaic reaction to the electrocapillarity response. DSA should be sensitive to not only the stress generating mechanisms that contribute to the steady-state stress but to relaxation processes that may occur as well. 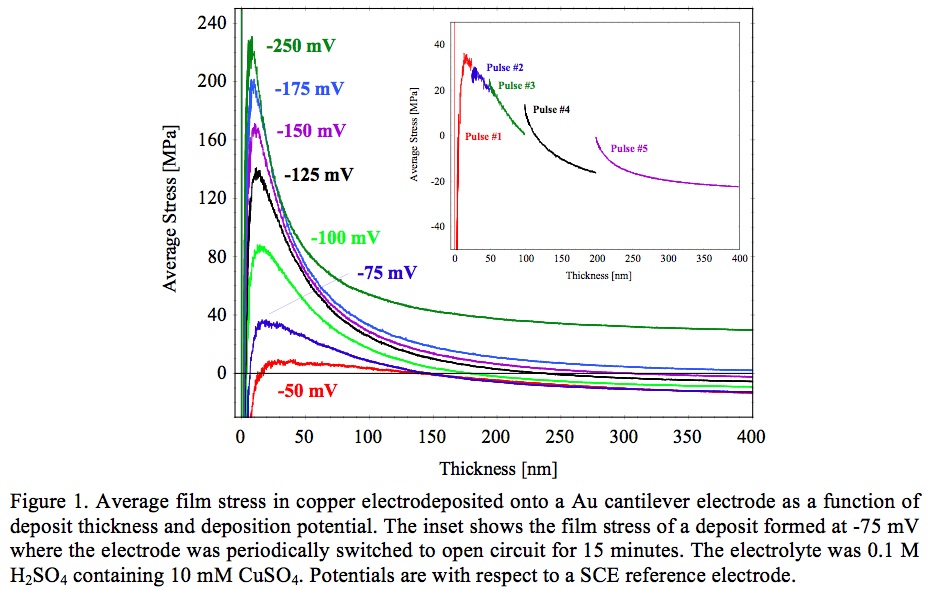