1394
The Oxidation of Bromide on Platinum Electrodes in Aqueous Acidic Solutions: Electrochemical and In-Situ Spectroscopic Studies

Expo Center, 1st Floor, Universal 11 (Moon Palace Resort)
D. Scherson, J. Xu (Case Western Reserve University), and N. S. Georgescu (Case Western Reserve University, Department of Chemistry)
Certain aspects of the oxidation of bromide in acidic aqueous electrolytes have been investigated via a combination of rotating disk electrode (RDE) and in situ reflection absorption UV-visible spectroscopic techniques.  Advantage was taken of the very high molar absorptivity of tribromide1, i.e. ε(λ=266nm) = 4.09 ´ 107 cm2mol-1, a solution phase species generated via the reaction of bromine and bromide, to monitor quantitatively its presence within the diffusion boundary layer. Numerical simulations of the electrochemical-chemical (EC) mechanism that takes into account the dynamics of formation and dissociation of tribromide, yielded good agreement with both the optical and electrochemical data collected under strict diffusion control. The experimental set up employed for these measurements was similar to that described earlier2, involving, in this case, a Cary 60 spectrophotometer and a modified set of reflection optics. The data collected were analyzed by theoretical simulations (COMSOL 4.3) that account for the formation of tribromide in solution using diffusion coefficients and homogeneous rates constants for the bromide|tribromide reaction reported earlier in the literature3, 4.

Shown in Fig. 1 are spectra collected in the region 230 ≤  λ ≤ 450 nm with the system described in the experimental section with the RDE rotating at rates in the range, 400 ≤  w ≤  2000 rpm. During this period, tribromide accumulates in the bulk solution and, thus, somewhat involved corrections must be introduced to the absorbance to correlate quantitatively the optical response and w.

A better approach, implemented in our work, involves stepping the potential while monitoring the absorbance at 266 nm and extrapolating the optical signal to the time immediately following application of the step. The results obtained (see open circles in Fig. 2) yielded a linear dependence between the potential difference absorbance, A(1.4V) - A(0.05 V), and ω-1/2 for the [Br-] ranges from 1mM to 10mM, where A(1.4 V) represents the absorbance while the electrode was polarized at 1.4 V, a  potential at which the oxidation of bromide proceed under diffusion limited conditions, and A(0.05 V) the absorbance at 0.05 V, where the contribution to the spectra is derived mostly from bromide accumulated in solution while the electrode was poised at 1.4 V. In this fashion, the difference in the absorbance can be attributed to tribromide present in the diffusion boundary layer. Also provided in this figure in solid symbols are the results of the theoretical simulations to be presented in the previous section. As clearly indicated, the intercepts for all three values of [Br-] appear to cluster at a value close to A(1.4V) - A(0.05 V) ca. 0.01. This phenomenon is caused by the change in the reflectance of the surface induced both by bromide adsorption and by the formation of Pt oxide.

In conclusion, the absorbance due to tribromide present in the diffusion boundary layer is in good agreement with values measured experimentally  provided proper account is made of the effect of the oxide layer on the optical measurements.

Fig. 2. Potential difference absorbance, A(1.4V) - A(0.05 V) vs ω-1/2, collected at λ  = 266 nm from a Pt RDE in solutions 1 (blue), 5 (red) and 10 mM (black) KBr in 0.1M HClO4 and at an angle of incidence, q  ca. 45oC (open symbols). These are plotted against the results of the theoretical simulations (solid symbols). The straight lines represent the best fits to the experimental data.  The error bars represent the average of four or two independent measurements. 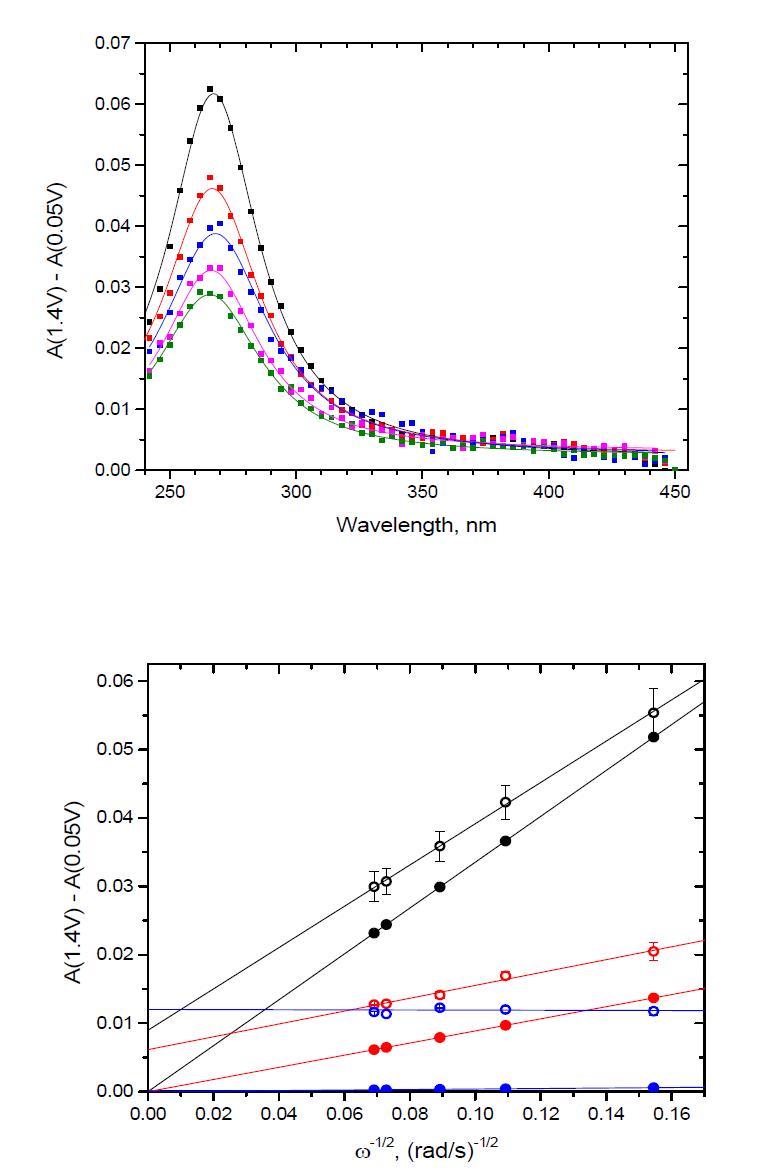