The memory cells are fabricated on an n+-type (111) (Antimony doped, 15-20 mµŮ-cm) Si wafer. 10-nm-thick Al2O3 is deposited at 250°C in Cambridge Nanotech Savannah-100 atomic layer deposition (ALD) system. Pristine graphene nanoplatelets (NanoIntegris PureSheets Quattro grade) are deposited by drop-casting technique. Samples are placed on hot-plate at 110°C and 2-2.5 ml of 0.05 mg/ml graphene solution is drop-casted slowly by using plastic pipette and samples are left to dry for 5 minutes on hot-plate. Then a 5-nm-thick Al2O3 tunnel oxide is ALD deposited at 250°C. A 400-nm-thick Al layer for the gate contact is sputtered using a shadow mask. A cross-sectional illustration of the fabricated memory device is depicted in Fig. 1a).

Then, the memory devices are electrically characterized by measuring the C-Vgate characteristics of the programmed and erased states at high frequency (1 MHz). Using the Agilent B1505A Semiconductor Device Parameter Analyzer, the memory cells gate voltage was first swept from -10 V forward to 10 V. The obtained C-V characteristic corresponds to the erased state as shown in Fig. 1b). Then, upon sweeping the gate voltage from +10 V to -10 V, there was a near parallel shift in the measured C-V curve in the positive direction as seen in Fig. 1b). The positive shift is due to electrons storage in the graphene nanoplatelets and the value of the Vt shift is 4.4 V.  The Vt is extracted at a capacitance of 500 pF at the onset of the depletion region. The measured memory window at different operating voltages indicates a large Vt shift (3.6 V) at low operating voltages (8/-8 V). At 10/-10 V, the charge trap states density of the graphene is calculated and found to be 5.83×1012 cm-2 [2].

Finally, the fabrication of such graphene based memory structure is compatible with existing semiconductor processing thus has potential on low-cost integrated nanoscale memory applications. 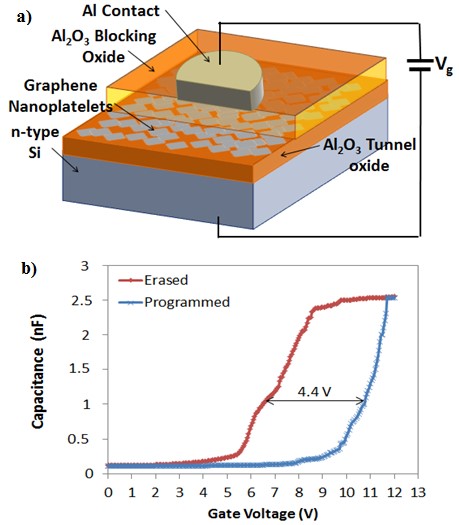