Safety is still an important concern in lithium-ion batteries. Safety issues have recently received greater attention because lithium-ion batteries are now being widely used in higher-power and larger-size applications such as electric-load leveling and electric vehicle systems. Phosphorus compounds, such as phosphate, phosphonate, and phosphazene, are widely known as excellent flame retardants. Correlation between a concentration of trimethylphosphate (TMP) in an ethylene carbonate (EC)-based solvent and a flame retardancy of the mixed solvent was quantitatively clarified by applying the limiting oxygen index (LOI) method. The EC-based solvent EC+EMC+TMP(1:2:3, v/v/v%) indicated that LOI is 24.5%, at which the solvent does not ignite in air. The aim of this research is to apply the electrolyte solution including 50vol% of TMP, which has high flame retardancy, for lithium ion batteries.

TMP tends to co-intercalate with Li+ into the graphite anode, resulting in continuous decomposition of electrolyte solvents and a large irreversible capacity loss during the initial cycling [1]. In recent years, however, Takeuchi et al. have discovered a method for suppressing the co-intercalation of TMP with Li+ into the graphite. Introducing a salt that is composed of stronger Lewis acids than Li+, such as Ca2+, made TMP more compatible with graphite [2]. In this study, interaction of flame retardants and Lewis acids were examined in more detail through understanding of the correlation between a composition of these electrolyte solutions and the coulombic efficiency in the initial cycling.

Furthermore, all the plots in Fig. 1 are mostly arranged along a straight diagonal line going up-down left to right regardless of the species of the flame retardants and the additives. This indicates that the strength of the magnetic shielding to the 17O nucleus of the C=O in EC correlates with the coulombic efficiency. Even after the addition of the same Lewis acid, the degree of change in the chemical shift in TMP was larger than that in DMMP. This means that it is difficult to selectively form a solvation structure of EC with Li+ by adding Lewis acids in DMMP because the magnetic shielding to DMMP is not as low as that to TMP. This difference between TMP and DMMP is attributed to the different electron-donating ability of the DMMP and TMP. As a result of the above, it was elucidated that each flame retardant formed a selective-coordinating solvation structure with each Lewis acid. 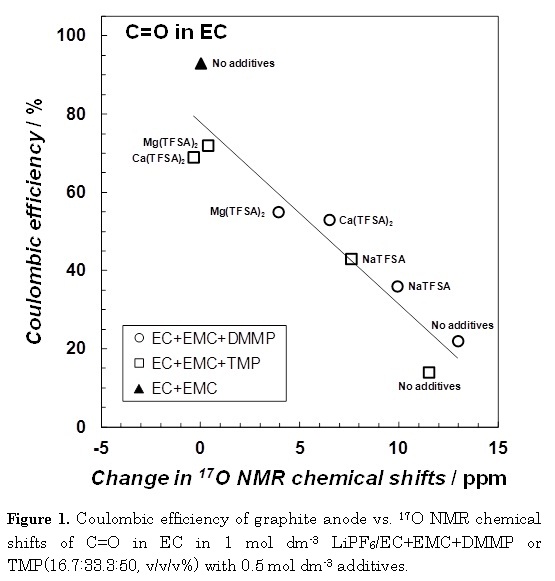