Lithium ion batteries (LIBs) are widely used in portable devices, such as cellular phones and laptop computers, because of their high energy density. Large LIBs for various industrial applications have recently attracted much attention and their development is ongoing [1]. LIBs include a positive electrode, such as LiCoO2, LiNi1-x-yMnxCoyO2, or LiMn2O4, a graphite negative electrode, and an electrolytic solution. The graphite is divided into two classes: natural and artificial graphite. Natural graphite is more cost effective than artificial graphite. But cell performances with natural graphite, for example cyclability and storage characteristics at high temperatures, is lower than with artificial graphite. Many researches suggest that deterioration of cell performance is related to decomposition of the Solid Electrolyte Interface (SEI). To improve cell performance with natural graphite, coating the graphite with ion exchange polymers such as polyacrylic acid (PAA) is effective [2]. The polymer may work as a pseudo SEI. On the other hand, the direct current resistance (DCR) of a cell with natural graphite coated with PAA tends to be high. LIBs, especially for Hybrid electrolytic vehicles require a low DCR, so it is necessary to develop new coating polymers to reduce the DCR. But it is very difficult to find new coating polymers because there are many ion exchange polymers, and we do not know the relationships between the structure of the ion exchange polymers and DCR.

In recent years, computational chemistry has been growing; the field of biochemistry, especially medicines, is widely used to promote the efficiency of the research. But there are few examples of developing materials for LIBs, especially coating polymers, using computer simulation.

In this research, we have investigated polymer functional groups and DCR values using computer simulation. We also have developed a new coating polymer which can reduce DCR.

Natural graphite and a ion exchange polymer (0.5 wt%) were mixed in water as a solvent, and coating graphite was obtained by removing the solvent. Three types of polymers were used (PAA, and two types of polymers containing sulfonate). An 18650 type LIB includes a positive electrode, a polyolefin separator, an electrolytic solution, and a negative electrode which, in this study, was made of coated natural graphite. The DCR values of the 18650 cells were measured at 25°C.

In this study, the Gibbs free energy (ΔGr) values of the polymer’s ion exchange functional groups were calculated by ab initio molecular calculations, RB3LYP/6-31G+(d). The polymer molecule is very large, so it is difficult to calculate ab initio. On the other hand, the properties of a polymer reflect the properties of its segments. So in this research, ΔGr was calculated for the polymer segment shown in Fig. 1.

3.Synthesis of a new coating polymer

A monomer containing functional groups of Fig. 3 and water as a solvent were mixed (weight ratio of monomer and water = 1:10) and 2,2'-Azobis (2-methylpropionamidine) dihydrochloride as the radical initiator was mixed. The mixture was heated in an oil bath at 60°C for 3 hours.

Fig. 2 shows the relationships between the DCR of the 18650 and ΔGr. The DCR and ΔGr had a well-defined correlation. ΔGr is defined by Eq. (1), where R is the gas constant and T is temperatures, and K is defined by Eq. (2), so ΔGr is related to the degree of disassociation.

From the results, highly dissociated polymers existing in the negative electrode are advantageous in decreasing the DCR. The DCR of PAA is higher than that of sulfonate polymers. The reason for the high DCR of PAA is that PAA is low dissociate. To decrease DCR, a polymer which has a functional group that is low ΔGr seems to be effective. So in this study, many polymers which have ion exchange functional groups were assessed. In this research, polymer segment shown in Fig. 3 displayed the lowest ΔGr; the value was 139 kcal/mol. 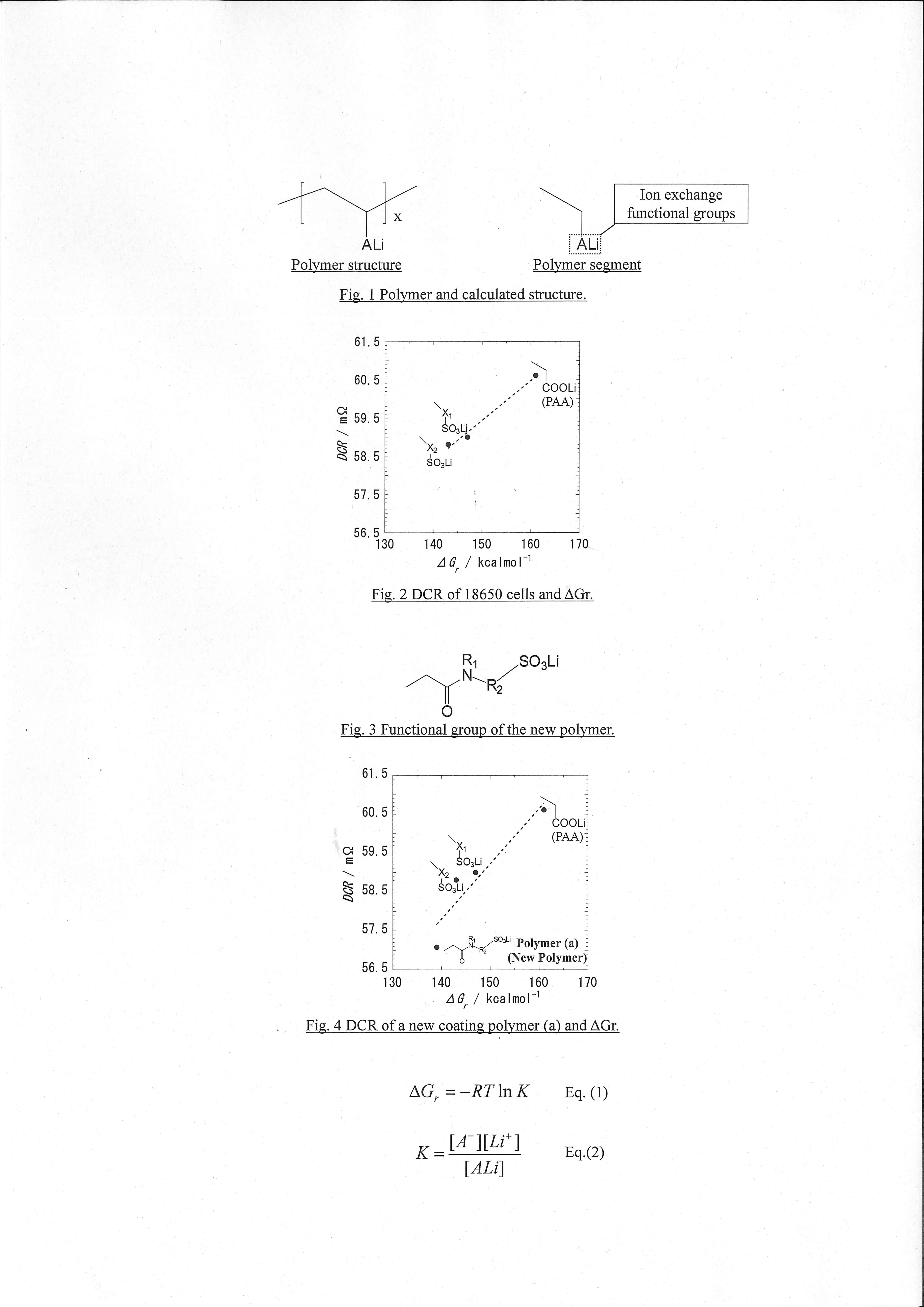