Salon A-2 (Hilton Chicago)
C. M. Snyder (Rensselaer Polytechnic Institute, Sandia National Laboratories), C. A. Apblett (Sandia National Laboratories), D. Duquette (Rensselaer Polytechnic Institute), and A. M. Grillet (Sandia National Laboratories)
The study of various degradation mechanisms in lithium ion batteries (LIB) that lead to capacity fade during cycling is of primary interest to the future progress of consumer electronic products, including the desire for advancements in hybrid electric vehicles. Considering that significant improvements to performance properties such as cycle life and energy density are crucial; it is necessary to advance the understanding of electrode and electrolyte materials, and the physical and chemical processes that ultimately lead to capacity fade in commercial LIB. By quantifying the degradation processes that occur within LIB, the predictive capability in modeling battery performance will improve.

This work introduces a novel approach to studying, in-situ, the degradation mechanisms of the cell as a whole with focus on the LiCoO2 electrode. The research involves utilizing fluorescence confocal microscopy to observe direct changes on the mesoscopic structural level as well as changes in the electrochemical cell performance in order to quantify the mechanical stresses that develop due to various processes (SEI formation, electrode expansion/ contraction, external loading, etc.). It is expected that this work will realize, for the first time, the effect of stress on particle configuration over time, loss of electronic contact to particles, and the role of binder in controlling and affecting stress evolution.

In this report, we report validation testing of the use of fluorophores in LIB for studying the interactions among particles and binder during cycling. Cyclic voltammetry (CV) is used to determine the electrochemical stability of fluorescents in electrolyte of 1.2M LiPF6 EC:EMC (3:7 by wt). CV testing was performed within the potential window of an operating LiCoO2 cell; 0 to 4.2 V. Fluorescents that were tested include acridine, acriflavine, boron-dipyrromethene (BODIPY FL), fluorescein, naphthofluorescein, quinine, rhodamine 6G, and rhodamine B.  Figure 1 shows the CV results for all fluorescents. Many of these dyes are not suitable for use in LIB due to strong reduction and/or oxidation peaks within the potential window. The most stable dyes that are best suited for use in LIB are fluorescein and naphthofluorescein.

Meanwhile, coin cell testing is performed to ensure that the addition of fluorescents to the electrode and electrolyte materials does not adversely affect the long-term performance of the cell. Coin cells were made with and without naphthofluorescein and fluorescein added to the electrolyte and binder, respectively. Cells are cycled for a minimum of 100 charge-discharge cycles at a C/10 charge and discharge rate.

In addition to performing validation testing and ensuring that dyes do not leach from their tagged component, preliminary imaging of the dyed cell using the confocal microscope is done in preparations for in-situ imaging and testing. 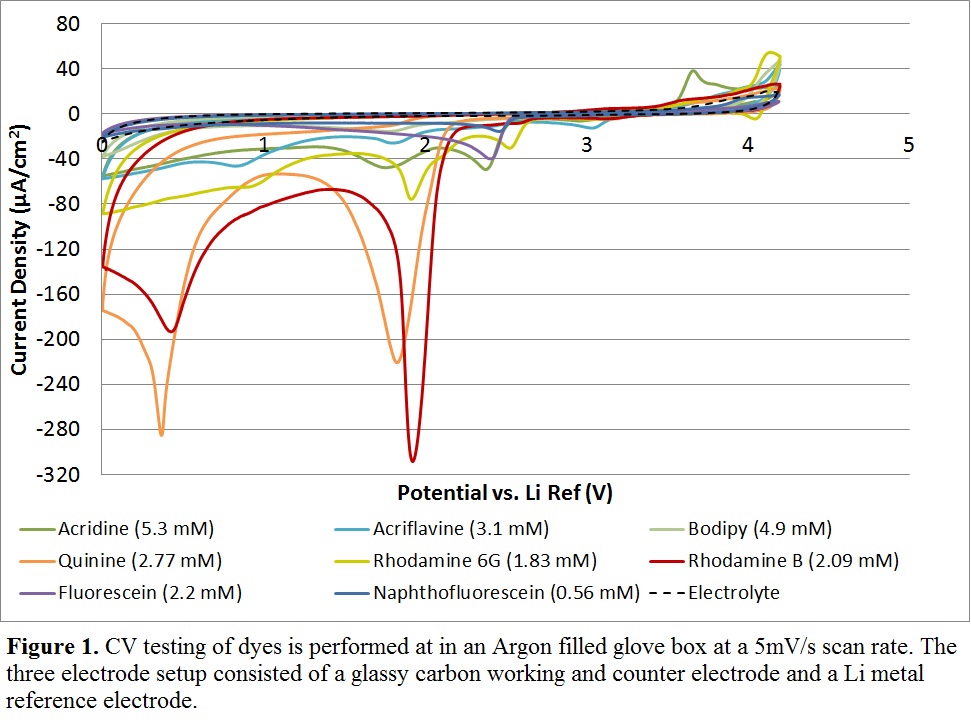